Winning with workplace health in the Global Healthy Workplace Awards 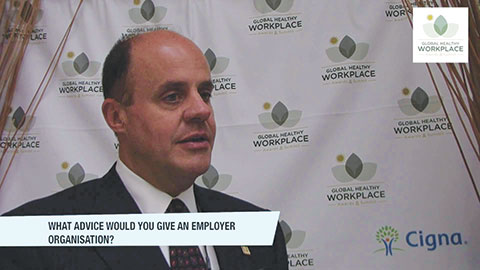 The inaugural Global Healthy Workplace Awards and Summit was launched earlier this year and was sponsored by the Cigna Foundation.

The awards were judged in the context of the World Health Organisation’s Healthy Workplace Model for Action, which considers a wide range of factors that affect health, including the physical work environment, personal health resources and the enterprise’s interaction with the community. Organisations of all sizes, based in 29 different countries, submitted their programmes to the judges, underlining the extent to which the value of workplace health initiatives have been accepted on a global basis.

The scheme began in the US, where employers shoulder a large proportion of their staff’s healthcare costs through health insurance. Johnson & Johnson, for example, first set its workplace health goals more than 30 years ago and by 2009, it was able to report that its programmes had produced annual savings per employee worth $565 – a return of almost $4 for every $1 spent on these initiatives.

Dame Carol Black, expert adviser on health and work to the Department of Health since 2008, was one of the judges of the Global Healthy Workplace Awards.

“We are now really beginning to see workplace health initiatives adopted across industry,” she says. “It’s not just because these initiatives are a natural fit with business’s corporate and social responsibility policies, though they are, but also because there is a financial return.”

The evidence base for that return on investment is not yet strong enough, Black says, but it has improved: “We still don’t have enough data, but we do have an increasingly large number of examples where you can see what the financial gain from workplace health programmes has been, from indicators such as absence rates and productivity.”

For sceptics about the potential returns on investment, the key may be to introduce assessment methodologies as part of the workplace health package.

“If you put in a packaged programme, one element of that can be data collection,” Black says. “Businesses do need to think about these initiatives in the round – bringing together functions such as occupational health, human resources and communications, for example, to really get the most out of that.”

The UK Government has begun to recognise the value to the economy of employers getting ill-health costs down and improving productivity. In his March 2013 Budget, Chancellor George Osborne announced a new tax relief, due to be introduced in 2014, for employers. This will cover the cost of treatment for sick employees with the aim of getting them back to work.

The tax break is worth up to £500 for each employee treated. It will be offered alongside a new, state-backed, independent assessment service to support employers to assess the needs of employees who are absent from work for four weeks or more. Any treatment that the new service then recommends will be eligible for the tax relief.

This additional help will add to the economic case for workplace health initiatives, although for many companies that case has already been made. EDF Energy is a good example. In 2006, an audit at the UK arm of the French multinational utility business revealed significant problems with employee sickness, including a major issue with mental health problems. The company estimated the total cost of the problems at £13 million a year.

EDF therefore resolved to invest in a prevention programme aimed at reducing its sickness rates. A consultation with staff was followed by a major new initiative led by an OH professional. This initiative combined approaches taken across the organisation as a whole with individual interventions. It also included the launch of an employee assistance programme, physiotherapy services, ergonomic assessments, stress and resilience training, and healthy lifestyle initiatives. Crucially, EDF also provided training in health issues to leaders and managers and appointed ambassadors to help communicate the message throughout the workforce.

The results at the company have been dramatic. EDF estimates that its workplace health programme is generating annual savings of around £4 million. Staff engagement with the employer has also significantly improved – 71% of employees say the company is interested in their wellbeing, compared with a national average of only 61%.

Global pharmaceuticals giant GlaxoSmithKline (GSK) reports similar successes from its initiatives in the area of mental health. It has introduced a programme of resilience training for staff that is based on the “Corporate Athlete” training initiative pioneered by the Human Performance Institute.

Since rolling out the training scheme, GSK reports a 60% fall in the number of work-related mental health schemes with which it has had to deal, while absences because of mental health problems are down by 20%.

Staff satisfaction with the employer has risen by 21%, while employees report a 25% decrease in the pressure they feel due to work–life balance issues. GSK has also registered a 4% increase in willingness among staff to try out new working practices.

Workplace health does not have to be the preserve of very large businesses with plenty of resources to put behind substantial programmes, particularly since there is now a great deal of support available to employers. The Workplace Wellbeing Charter, for example, is a service offering advice on a wide range of health-related issues, as well as an accreditation scheme that enables employers to show how seriously they are taking such issues.

The service includes an award specifically aimed at small and medium-sized enterprises (SMEs). This award recognises that smaller businesses may not be able to do as much – certainly not systematically – as their larger peers. The point is that businesses can do as much as they feel able to do.

At Cornwall’s TRAC Services, a regulatory consultancy with just 30 members of staff, that message has been received loud and clear, and the company believes it is reaping the benefits of the work it has put into workplace health initiatives such as information campaigns. TRAC has been committed to such initiatives for several years, focusing on various ideas. For example, last year’s programme included a different information campaign each month on everything from the importance of employees managing their blood pressure to staying safe in the sun. TRAC ran the campaigns in partnership with other agencies, such as the Cornwall and Isles of Scilly Health Workplace Awards scheme.

TRAC believes that the results speak for themselves. Since 2008, staff absence rates have more than halved. Its staff members typically take an average of 1.56 days off each year for sickness, which is around a quarter of the country’s average.

Arguably, the incentive for small businesses such as TRAC to tackle workplace health is even greater than that at large companies. In an SME with only a small number of employees, staff absences – particularly when they are prolonged – tend to have a disproportionate effect on the business as a whole.

The headline costs to large businesses of workplace absence may be higher, but at least they have resources at their disposal to cover problems in one part of the business.

Smaller businesses were well represented in the entries for this year’s Global Healthy Workplace Awards, which were eventually picked up by three organisations – Alexandra Health, Royal Dutch Shell and Toyal America. The winners shared an attribute that Black says is crucial for workplace health initiatives to succeed.

“You must have buy-in for the programme from senior leadership at the highest levels,” she says. “While workplace health is likely to be led by functions such as human resources, if other functions are to support the programme and staff are to embrace it, the chief executive and the rest of the executive team need to be seen to be buying in too.”