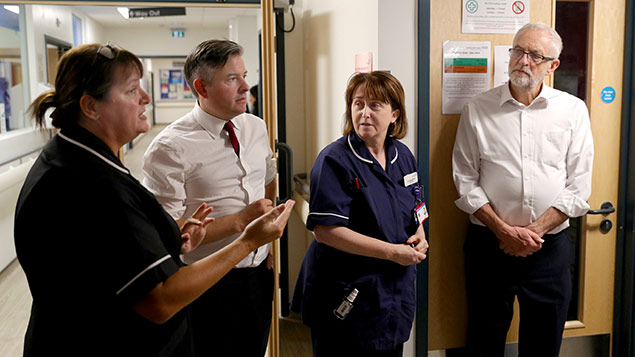 The disclosure came as the Labour party pledged an extra £26 billion in real terms for the health service, adding that the investment would help recruit thousands of staff.

If it wins the general election on 12 December, Labour will invest £1 billion in restoring a training bursary for nurses and help recruit 24,000 extra nurses, as well as extra midwives and allied health professionals.

Speaking on Radio 4’s Today programme, Ashworth agreed that Labour would retain freedom of movement for the NHS.

“We won’t, for example, impose a nurses’ tax on the nurses and midwives from the EU who want to come here to care for our sick and elderly, as the government are proposing.”

Asked to confirm that Labour would retain freedom of movement for medical professionals in the NHS, he said: “Yes”. He added: “If a hospital trust believes that a doctor, a surgeon, a consultant, a nurse, a midwife or another health practitioner is good enough to come and care for our sick and our elderly and offers us that opportunity, we will not stand in the way of that hospital trust, because we need to be able to recruit internationally.”

Pressed on whether those staff could bring their families from the EU, he said: “Yes indeed, because we need more doctors and nurses from across the world to come and work within the NHS.

“The government say the same but they put in place so many obstacles and bureaucracy, it leaves hospital managers tearing their hair out because they’re desperately short of staff and they’ve got staff internationally who want to come and work on their wards but the government’s not letting them in.”

With 100,000 vacancies, the commitment to invest in training and development cannot come soon enough but alongside efforts to retain and attract staff, we need to able to recruit from overseas” – Niall Dickson, NHS Confederation

Unveiling the party’s vision in a speech today at the Royal Society of Medicine, Ashworth and shadow chancellor John McDonnell will announce an annual average 4.3% funding increase for health spending over the next four years.

Ashworth will say: “A decade of Tory underfunding and cuts has driven our NHS into year-round crisis. Over 15,000 beds have been cut, hospitals are crumbling and our NHS is chronically short of nurses and family doctors… With experts warning this winter is set to be one of the worst the truth is our NHS is crying out for a financial rescue plan to deliver real change for patients.”

The rescue plan includes NHS capital expenditure rising to the international average, £1 billion a year training and education budgets and £1 billion more to fund a major expansion of public health services, with a focused drive on prevention measures to stop people becoming unwell.

McDonnell will say: “The world-class health service we all need and depend on needs proper funding. Labour’s policies to tax the richest in society and invest for the future through our social transformation fund mean we will be able to improve millions of lives.”

Approximately one in ten positions across the public health infrastructure remains unfilled as managers struggle to recruit and retain staff.

Niall Dickson, chief executive of the NHS Confederation, which represents organisations across the health service, said: “Labour’s pledge to spend more on the NHS would represent a significant extra investment on top of that already pledged by the Conservatives which, if used wisely, would help to transform services and retain frontline staff.

“Any plan to invest in the NHS should involve local health and care leaders as they are the experts in deciding where additional resource should be directed.

“With 100,000 vacancies, the commitment to invest in training and development cannot come soon enough but alongside efforts to retain and attract staff, we need to able to recruit from overseas. Also, we need to see a commitment to reform the tax laws which are damaging patient care because doctors and other senior frontline clinicians can find themselves worse off for undertaking extra work.”

The cost of Labour’s pledge for free prescriptions and free hospital car parks are not included in these figures. The party also said it would invest in the public health nurse workforce delivering an extra 4,800 health visitors and school nurses.