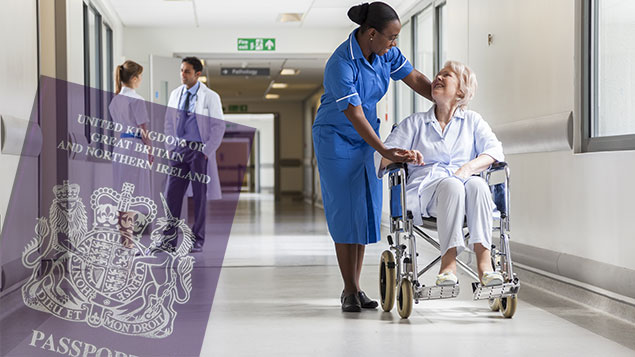 Health workers hoping to take up jobs in the UK will benefit from preferential immigration processes with the introduction of an NHS visa costing £464.

Applicants will receive a decision within two weeks and extra points will be awarded to those wishing to work in the NHS, Boris Johnson announced yesterday as he broadly outlined plans to introduce an “Australian-style points-based” immigration system in the UK. Without the discount the visa would cost £928.

Johnson reiterated that those who gain work in the UK would have to pay a health surcharge, which they will be able to pay back via their salaries.

The Royal College of Nurses said it was “immoral and heartless” to charge overseas nurses to use the services they themselves “keep running”.

Crossbench peer Baroness Finlay, a professor of palliative medicine and a former president of the Royal Society of Medicine, told Radio 4 this morning that the measures outlined by the prime minister would not help solve the NHS skills crisis. She said: “We are very dependent on foreign workers in the health service and many are at a very highly skilled level. Some people now feel unwelcome and many are thinking about leaving.

“These visas are only for five years; we have to look at long-term supply, and we don’t have enough of our own graduates coming through.” She also referred to current pension rules causing a significant proportion of senior hospital doctors to consider leaving the NHS and many to refuse to work overtime. “The pension rules have changed so some senior doctors have to pay to work,” she said. “And we’ve made it difficult for people to return to the profession after retirement.”

The British Medical Association yesterday demanded an end to the “punitive pension tax system which is driving doctors out of the workforce”.

Chair of the Health Select Committee, Sarah Wollaston, who recently resigned from the Conservative Party and joined the Liberal Democrats, tweeted her opposition to the government’s latest proposals, also noting that social care in the UK could face collapse because neither workers nor care homes could afford the rises in fees and increased bureaucracy.

Tories ‘NHS visa’ isn’t going to make it easier to recruit EU staff to fill its 100,000 vacancies. Currently there are no fees. Tories will still be adding a visa fee & £400 a year compulsoryhealth insurance for staff +£1,000 immigration skills charge for NHS for each worker

Sara Gorton, a Cavendish Coalition co-convenor and Unison head of health, also voiced concern over social care. She said: “The social care workforce challenge is that 580,000 new staff would be needed just to keep pace with the projected growth in the population of over-65s by 2035. We already need more people because there are 122,000 social care vacancies.

“We would call on any incoming government to enable all health and social care employers to recruit and employ any necessary labour from outside the UK without criteria.”

Home Office minister Victoria Atkins tried to reassure Radio 4 listeners this morning that the government was pursuing a twin-track approach by boosting medical training in the UK and attracting the “brightest and best” from overseas.

But BBC political correspondent Nick Robinson countered that “brightest and best” and “points-based system” were merely slogans and the government had had three years since the EU referendum to come up with detailed proposals for an immigration system but had failed to do so. He cited a speech in which former prime minister Theresa May had said that phrases like points-based system were meaningless unless the government stated whether the aim was to increase or reduce immigration.

Robinson pointed out that 60,000 current NHS staff would not have been eligible to work here under income rules if they had applied now.

Atkins was unable to say whether immigration would be higher or lower than it is at present. “We are in the process of developing a new immigration system,” she said.

Robinson’s eligibility point has been amplified by Nesta Lloyd-Jones, assistant director of the Welsh NHS Confederation. She said: “If the current proposed salary threshold were already in place, nearly 53% of EU professionals working in the health service would not fulfil the UK government’s requirements. These professionals include nurses, midwifes, psychologists, speech and language and occupational therapists, physiotherapists, radiographers and pharmacists.”

Dame Donna Kinnair, chief executive and general secretary of the Royal College of Nursing, criticised the imposition of the immigration health charge for medical staff.

She said she would reserve judgment until more details of the plans were available, “but it is of deep regret that the prime minister is preserving the immoral and heartless charge for overseas nurses to use the same services they keep running. It should be abolished, not spread out every month. There are tens of thousands of unfilled nursing jobs and we need more ambitious plans than this to address it.”

Home secretary Priti Patel is expected to further promote the government’s measures, which she said yesterday, “are part of our plan for an Australian-style points-based immigration system that allows us to control numbers while remaining open to vital professions like nurses.

“That means the best of both worlds – attracting talent from around the world so our NHS continues to provide brilliant service while ensuring that it isn’t put under strain by opening Britain’s borders to the entire world.”