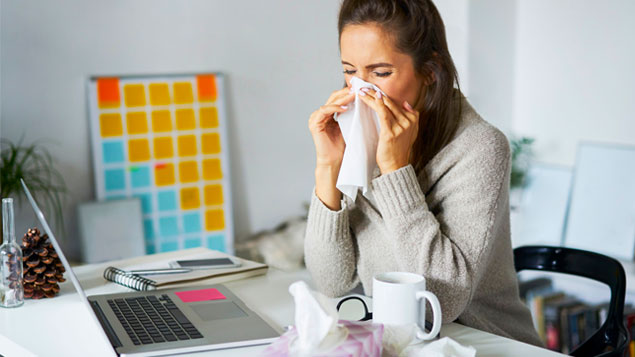 Nine in 10 employees continue to work even when they are suffering from a “minor” illness, with many feeling their workload is too great for them to take a day off.

Almost half (47%) of staff did not take a sick day at all in 2017, according to research from Canada Life Group Insurance, though this proportion was slightly lower than the figure for 2016 (54%).

Only minority of employers tackling presenteeism, warns CIPD, despite tripling of cases

Reasons why employees did not want to take a day off included not feeling their illness was serious enough (as stated by 53%); workload pressures (25%) and not feeling secure enough in their role to take a sick day (9%).

According to the Office for National Statistics, the average number of sick days taken fell to 4.1 days in 2017 – a record low – which the CIPD has suggested is an indication that presenteeism could be on the rise.

“Presenteeism is a vicious cycle; the drive to remain in the office can cause illness to spread or end up leading to a longer recovery time,” said Paul Avis, marketing director at Canada Life Group Insurance.

“Failing to take a sick day can have a significant impact on business performance as employees fail to recuperate properly. As well as changing perceptions, employers can offer much more to support staff when they are unwell.”

Despite many workers suggesting illness was perceived in a negative way in their organisation, there were also some positive responses. Seventeen per cent said their colleagues were likely to view them as “genuine” if they took a sick day, while the same proportion thought they would be considered “sensible”.

Avis said it was encouraging that many employees viewed those taking time off for illness in a positive way: “To reduce presenteeism, these positive perceptions must be encouraged so workplaces can reduce any stigma attached to taking time off.”

Twenty-eight per cent said their mental and physical health was likely to improve if their employer offered flexible working and 19% said access to better support – such as an employee assistance programme – would be helpful.