Managing the use of e-cigarettes in the workplace

By Sarah Silcox on 27 Jun 2014 in E-cigarettes, USA, Smoking in the workplace, Occupational Health, Wellbeing 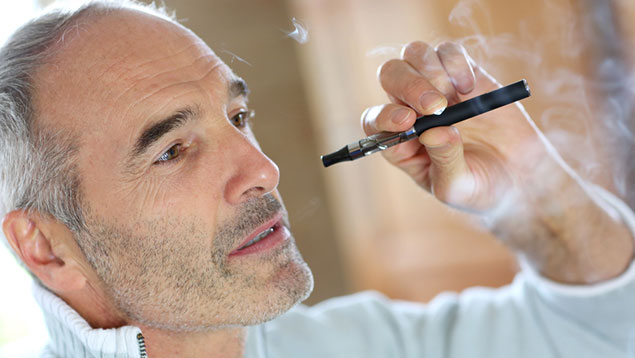 The increasing use of e-cigarettes, which are not covered by the same legislation as tobacco products, means employers may have to reconsider and rewrite their workplace policies, finds Sarah Silcox.

The European Parliament approved a revised EU Tobacco Products Directive at the end of February 2014, which requires member states, including the UK, to introduce rules ensuring the safety and quality of e-cigarettes. In future, e-cigarette packets will have to contain a health warning, together with instructions on use and information on addictiveness, toxicity and nicotine content. Member states are able to introduce additional safeguards – for example, age limits for purchasing e-cigarette products – and have two years to transpose the provisions of the revised Directive into national law.

Legal Q&A: E-cigarettes in the workplace

In this article, solicitor Victoria Clark answers employers’ questions on how to deal with the use of e-cigarettes in the workplace.

This latest move can be set in the context of a rapidly growing market for e-cigarettes. Research from campaign group Action on Smoking and Health (Ash) suggests that their use among smokers increased from barely 3% in 2010 to 11% in 2013. However, the health implications of “vaping” are still unclear. Research is limited, and even conflicting, on the effect of smoking e-cigarettes on both the health of “vapers” and those around them. The relative newness of e-cigarettes means that there are no longitudinal studies exploring whether or not they act as a gateway to conventional tobacco use (Pepper and Brewer, 2013).

Academics and policymakers continue to debate whether e-cigarettes can and should form part of an effective tobacco harm-reduction approach. The UK healthcare advice and guidance provider, the National Institute for Health and Care Excellence (NICE), published public health guidance on the issue in June 2013 (NICE, 2013) that supports the use of licensed nicotine-containing products to help smokers cut down, to aid temporary abstinence or as a substitute for smoking.

The NICE guidance is supported by a recent study (Caponnetto P, 2013) exploring whether or not e-cigarettes are an effective way to cut down on nicotine intake for those not intending to quit smoking entirely. A randomised controlled trial of 300 smokers, two groups of which received different strength e-cigarettes for a 12-week period, observed a reduction in smoking in 22.3% of smokers after 12 and 10.3% of smokers after 52 weeks. Complete abstinence from tobacco smoking was also documented in 10.7% and 8.7% of cases at the 12-week and 52-week points, respectively. The trial also records a substantial decrease in the reporting of adverse events by the smokers, who also reported few withdrawal symptoms.

The lack of clear, longitudinal data on the health impact of e-cigarettes makes it difficult for employers to develop workplace policies on the matter, although Acas has issued some guidance in How should employers deal with e-cigarettes in the workplace? (2013).

The rapid rise in the use of e-cigarettes in the past few years has unsettled those whose professional lives revolve around researching and developing tobacco harm-reduction strategies. Up until the last three or four years, many researchers and policymakers in the tobacco control field believed that the increased regulation of advertising, together with restrictions on smoking in public places, put the Western world on an inexorable path to smoke-free status.

However, the arrival of e-cigarette raises some big questions around this assumption, challenging researchers to shift their approach. How safe are e-cigarettes for individuals, and are they effective in helping smokers cut down or quit using conventional tobacco products? Is “vaping” safe for those around the users of e-cigarettes? How will the impending changes to the regulatory environment on e-cigarettes arising from the revised EU Directive, particularly any provisions on the way they can be advertised and marketed, affect their use? Will those selling and manufacturing e-cigarettes, often the same companies as those marketing more conventional tobacco products, increasingly be embraced as part of the harm-reduction solution rather than part of the problem?

One recent study (Schober, 2013), based on observations of vaping sessions, concluded that smoking e-cigarettes impairs indoor air quality and, in particular, is associated with high concentrations of particulates in the atmosphere. Concentrations of aluminium in the air around “vapers” increased and the nicotine content of the liquids in the e-cigarette vapour was 1.2 times higher than that claimed by the e-cigarette manufacturers, the study found.

The authors concluded: “E-cigarettes are not emission free and their pollutants could be of health concern for users and second-hand smokers … In view of consumer safety, e-cigarettes and nicotine liquids should be officially regulated and labelled with appropriate warnings of potential health effects, particularly of toxicity risk in children.”

Dr Paul Nicholson, associate medical director at Proctor & Gamble, argues that this study “adds substance” to the British Medical Association’s (BMA’s) call for the stronger regulation of e-cigarettes. In a position paper, the BMA calls for existing smoke-free legislation to be expanded to include the vapour from e-cigarettes, arguing that while the products have the potential to be used as part of a tobacco harm-reduction approach, there is also a need for stronger regulation so that marketing activities target existing smokers rather than non-smokers and young people or children.

A strong regulatory approach is also needed to ensure that “vaping” does not undermine the success of more conventional tobacco control measures in recent years by normalising smoking – particularly as the appearance and practice of smoking an e-cigarette is designed to mirror that of a “real” cigarette.

Ash takes a different line to the BMA, arguing that it is not appropriate to include e-cigarettes under UK smoke-free regulations as there is currently little evidence that their use causes harm to bystanders. It cites the NICE guidance on tobacco harm reduction, which supports the use of licensed nicotine products as an aid to cutting down or quitting smoking conventional products.

The group accepts that there is no thorough clinical evaluation or long-term, population-level surveillance research on the safety of e-cigarettes, but argues that most of the safety concerns relate to quality-control issues – for example, there is significant variability in the effectiveness of devices and how they deliver nicotine – issues that should be addressed as a result of the revised EU Tobacco Products Directive.

Ash acknowledges that the data on the use of e-cigarettes as a smoking cessation measure is limited, but adds that some research finds electronic products help cut cravings and, therefore, the number of cigarettes smoked. It suggests that any effects from “passive vaping” are likely to be limited to irritation to the throat from the propylene glycol content of the vapour.

The BMA calls on employers to introduce organisation-wide policies prohibiting the use of e-cigarettes at work, and says that these workplace measures need to be supported by stronger regulatory controls on workplace “vaping” in order to protect non-users from exposure to “passive vaping”. Such an extension of current UK legislation on smoking in public places is also needed, the body argues, to ensure that the use of e-cigarettes does not undermine existing restrictions on smoking at work – for example, by “normalising” smoking behaviour.

Acas guidance on e-cigarettes in the workplace points out that they are not covered by the Health Act 2006, which prohibits conventional smoking in the workplace, making individual employers responsible for deciding on an appropriate policy. Acas suggests that employers look at the safety of the chemicals used in e-cigarettes in deciding whether or not to restrict vaping at work, and at whether or not the practice is likely to upset other workers – particularly pregnant women and those who are trying to quit conventional tobacco products.

Employers should also consider whether or not vaping is in keeping with the professional image of the organisation, especially in workplaces where clients or members of the public come into direct contact with employees. Acas also echoes the BMA’s concern that the use of e-cigarettes at work may undermine efforts to make tobacco use unacceptable by normalising cigarette use in an environment where conventional tobacco products are banned.

Acas adds that any employer policy must also consider issues of equity between employees smoking conventional cigarettes and colleagues smoking the electronic version – for example, it may be fair to require employees using e-cigarettes to take a smoking break outside the work environment in a similar way as conventional smokers are currently required to do.

Acas (2013). How should employers deal with e-cigarettes in the workplace?