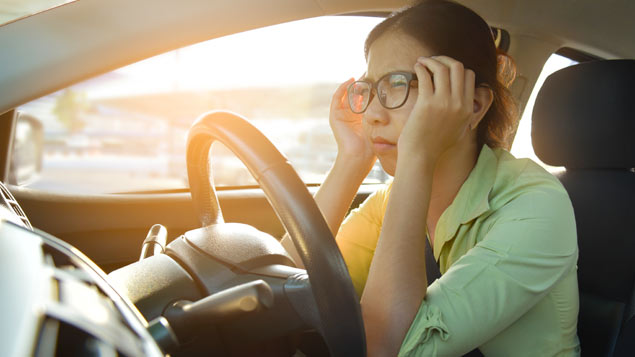 Almost one in 10 staff who drive for work have fallen asleep or nearly fallen asleep at the wheel as a direct result of work pressures, long hours and demands, risking their safety.

Can an employer obtain information from DVLA about an employee’s driving licence?

Business insurer NFU Mutual, which commissioned a study into the effect Britain’s “overtime culture” has on road safety, found 16% of workers had been on a work call while driving and 5% had responded to work emails while at the wheel.

According to the Health and Safety Executive, more than a quarter of road traffic incidents involve someone who is driving for work.

Only 38% of the 1,175 workers surveyed agreed that their employer had a suitable culture to help workers drive safely. Twenty-eight per cent said they had been asked to get somewhere at the last minute, while 27% said work pressures had caused them to feel stressed or distracted while driving.

Eight per cent admitted that fatigue from work pressures had caused them to fall asleep or almost fall asleep while on the road.

Rebecca Richards, a business insurance specialist at NFU Mutual, said staff might feel the need to work long hours to meet productivity targets or progress in their careers, which might lead them to drive while tired. They might also feel pressured to respond to emails or calls while driving.

“Companies can help look after their staff on the road by making sure their culture is distraction-free, excusing them from calls if they are travelling,” she said.

“In a digital world, bosses should be aware that employees might also feel pressure to respond immediately – it’s alarming that some people even respond to emails while driving. Motorists should always follow the law and park up in a safe, legal place if making a call, using hands-free technology.”

More than a third (35%) of the survey respondents said they were expected to work outside their contracted hours and 46% said they sometimes worked late into the night to meet work demands.

One company that responded to the survey said an employee was involved in a near-fatal crash after she fell asleep at the wheel during a 280-mile round-trip. She had worked through the night to get a presentation completed on time.

The incident prompted the company to ban emails from being sent out-of-hours without management authorisation and telematics were brought in to monitor driving behaviours.