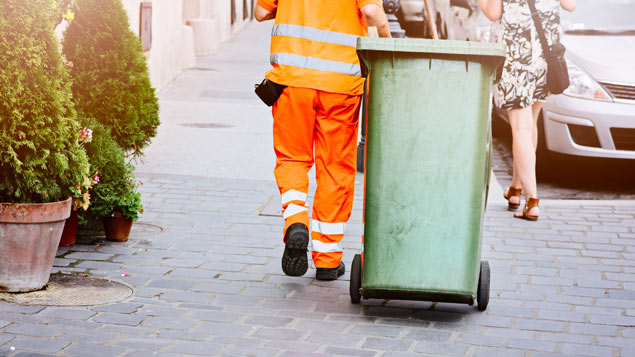 Sickness absence rates among waste collection staff could decline if local authorities changed the style of bins they provided households, a study has suggested.

Loaders – those involved in picking up the waste from the kerbside – in authorities that used boxes and baskets took an average of 18.4 days off sick a year. This reduced to 14.6 in areas where wheeled bins were used.

There was a similar improvement in sickness absence rates among drivers, who sometimes assisted loaders in picking up the waste. Drivers took 15.3 sick days per year in areas that used boxes and baskets, compared with 10.7 days in those that used wheeled bins.

Sickness absences were reduced further when workers were involved in the collection of large four-wheeled bins manoeuvred by two people, according to the analysis of data supplied by 15 local authorities, which has been published in the Resources, Conservation and Recycling journal.

The researchers calculated sickness absence rates by job type and compared absence rates for MSDs and non-MSDs for each primary job role.

Dr David Thomas, an academic portfolio lead in the School of Design at the University of Greenwich, said: “There are over 60,000 waste collection workers in the UK and employers should evaluate ill health risks before new waste collections systems are adopted and rolled out. They should also monitor absence rates specific to work activity to ensure that they move to more sustainable systems that create less MSDs.”

Andy Robertson, chair of the Institution of Occupational Safety and Health’s Environmental and Waste Management Group, said: “It is hoped that local authorities who still using boxes and bags not only take notice of the research results, but importantly take action to reduce risk to those collecting waste on their behalf by changing to wheelie bins.”

Earlier this year the University of Greenwich and Glasgow Caledonian University published a separate study that urged local authorities to discontinue collections of box-style bins as soon as possible after finding that workers’ pain ratings increased when more local councils began using them.

Around 70% of people employed in the waste management industry are involved in household waste collections but they account for 80% of all injuries in this sector, according to the Health and Safety Executive. MSDs are among the most common conditions reported in waste management.