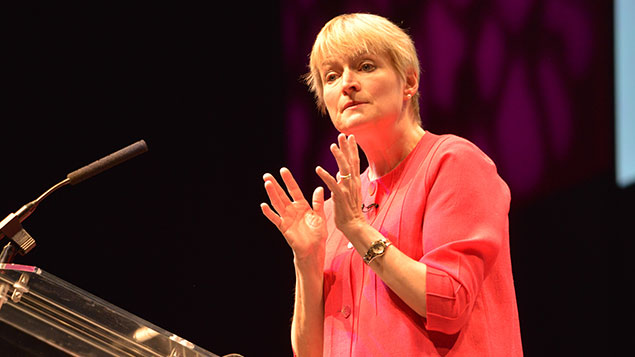 Martin Couzins highlights his key lessons for employers to take away from last week’s CIPD annual conference in Manchester.

Opening this year’s conference, CIPD chief executive Peter Cheese told 1,200 delegates that the institute is focusing on three areas of work: changing workforce trends; workforce data and analytics; and the science of behaviour. He said that getting these right means that HR will truly be an enabler of change in organisations, rather than what many people consider it to be  – namely, too much of a control function.

Keynote speaker Rita Gunther McGrath, associate professor of management at Columbia Business School, took a look at some of the business trends affecting employers. She told delegates that there was no such thing as sustainable competitive advantage, and gave the example of the BlackBerry manufacturer RIM, which saw its peak 43% share of the US smart phone market in 2010 drop to just 3.8% of the market in 2013.

“When we think stability is with us for a long time, we are putting ourselves at risk. So what does strategy look like in this world where advantage is no longer certain?” she asked delegates.

McGrath said that many business methodologies are no longer suitable for the today’s world and that “continuous business reconfiguration” is the key to successful change. HR’s role in this is to help organisations look at new growth areas within the business and to find resources to do that. She called this supporting “healthy disengagement” – moving away from old ways of doing things in order to explore new ideas.

HR will be required to move resources around the business and away from those who control the purse strings. And it is likely that people will defend the status quo, so HR needs to be looking for new people who will be brave enough to change the way things are done. Organisations need new processes of innovation in order to produce growth, she said.

Picking up on the second of the conference’s major themes of data and analytics, Darren Hockaday, HR director at London Overground Rail Operations, told delegates that many in HR fail to link their activities to business impact.

Not so at London Overground, he said, as service performance is penalised to the tune of £65 for each minute a train is delayed. The company carries 140 million passengers per year. This means that all the teams at London Overground, which is shortlisted in three categories at this year’s Personnel Today Awards, are focused on business performance.

Hockaday outlined ways in which HR had made a significant impact on the commercial success of the business. These included changes in day-to-day operations and planning. By using attendance data he was able to look at what follow-up actions are taken when employees are absent. Using a system that shows real-time attendance data and by having daily meetings on attendance, he was able to talk to managers around the business to see what they were doing to get people back into work. Over the last year it has made £600,000 in savings on absence and attendance has risen from 96.5 to 98.5%.

As a part of driving efficiencies across the business, Hockaday’s team suggested that trains could run without conductors. As a result, London Overground removed conductors from trains, saving £5 million a year.

“HR must start conversations with internal customers on how they can help reduce costs and drive efficiencies,” he said.

Data is also at the heart of enabling organisations to become more flexible. In a session on business agility, Ian Cutler, HR director at global insurance broker Willis, said being able to assess the benefits of new working processes had been a revelation to the company, which is now able to quantify the benefit of new business processes.

Cutler outlined three areas where more agile processes had led to business improvements: introducing hot desks for the sales team in the company’s London offices, which led to an annual saving of $180,000 a year; new seating plans within offices have led to more frequent discussions within teams, which have helped increase sales by 147%; and broadening the skills of the sales team has meant teams have been able to work on other projects to counter the peaks and troughs of the company’s sales cycle.

Fiona Cannon, director of the Agile Future Forum, said that culture was the biggest barrier to becoming a more agile business. “You have to get the CEO on board if you are to have any chance of making this work further down the organisation,” she said.

Just under half (45%) of employees admitted to taking phone calls or responding to emails outside of contracted working hours, and one-third of these said this was through choice, rather than being pressured to do so.

Lifting the lid on behavioural science, the third strand of the conference, Nick Chater, professor of behavioural science at Warwick Business School, provided some insights into “virtual bargaining”. Virtual bargains are the unwritten rules that are at play in any organisation. These rules are based on how humans coordinate with each other on tasks, and Chater said that successful teams were the ones in which it was obvious who does what.

He also said that the communication can get in the way of doing what we need to do.

“We all know how to coordinate with each other without communication. Communication is tiring, costly and we can get things wrong. We need to allocate tasks in a way that make sense for us. Knowing who can do what in the team is critically important to success.”

Seven quotes from the 2014 CIPD conference

“We need an HR profession that can use Excel.”
– Michael Davis, chief executive, UK Commission for Employment and Skills

“There are people who matter in organisations and those who don’t matter. It’s no surprise millenials do not want to commit to organisations – they understand this.”
– Norman Pickavance, head of people and culture, Grant Thornton

“Who decided we have to work five days a week? Was it in the Bible?”
– Peter Cheese, chief executive, CIPD

“Think of your problems as a gift – get out there and fix them.”
– Rita Gunther McGrath, associate professor of management, Columbia Business School

“We are an overhead, but we must focus on areas where we most add value.”
– Sue Swanborough, HR director, General Mills UK

“If you are not prepared for gen Y you had better be ready for gen Z.”
– Lynne Weedall, group HR and strategy director, Carphone Warehouse

He said that most people tend not to know the official rules in an organisation but they are only too well aware of the unwritten ones.

One area where this can be applied in organisations is recruitment. Chater said that hiring managers tend to employ people in their own image and are bad at selecting new candidates that they know very little about. Hiring new candidates based on a deeper level of understanding of who they are is far more productive. He said that organisations need to be able to see the virtual bargaining of a new team member before they recruit them. This would mean putting new candidates into team environments to see how they work with colleagues. He added that employers should also use psychometric tests and analyse CVs to build a more accurate picture of candidates.

During the conference, the CIPD also launched reports relating to human behaviour, one on behavioural science and one on neuroscience. The latter report provides practical insights into how organisations are using neuroscientific research to change the way they support organisations.

For example, the Welsh Ambulance Service NHS Trust is using exercise and movement in learning and development to improve brain functionality. Coaching conversations now take place, along with in-classroom training sessions where people are encouraged to move around. James Moore, assistant director of organisational design and development at the trust, said that employees are reporting that these initiatives are far more effective as a result.

While the HR profession works to change the way it operates, some big challenges remain. These were spelled out in a panel debate on labour market trends. Globalisation and workforce mobility combined with the impact of technology on low level knowledge work have changed the way many businesses work. However, these changes have not seen an increase in the UK’s productivity, which now lags behind all the other members of the G7.

Cheese said the lack of investment in the UK’s skills had been “alarming” and questioned whether or not the UK had been building the right kinds of organisations.

He said that it was at an inflection point and that HR had to “take responsibility for the jobs we design, the people that we recruit and the skills that we develop”.

“We’ve got a job to do fellow HR people. This isn’t about us worrying about commerciality, a seat at the table, engagements or any of those buzzwords – this is about the impact our organisations have on society itself and in which we have a critical role.”