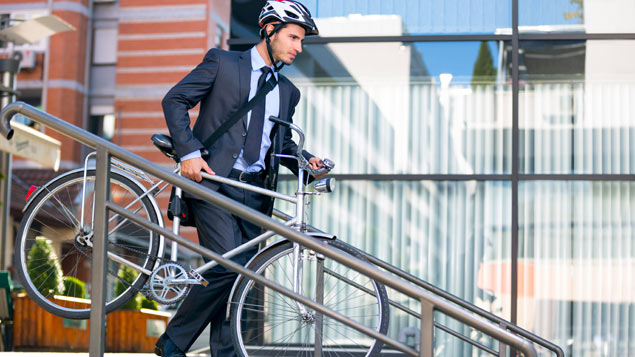 Almost half did not have access to physical activity provision such as bike storage. Shutterstock

Eight in 10 (84%) workers are failing to achieve the minimum amount of physical activity recommended by the NHS, while many claim they do not have access to facilities that will enable them to become more active during their working day.

The average Briton spends seven hours and two minutes sat down per day, with more than a quarter (26%) sitting for nine hours or more, according to Westfield Health’s latest monthly Wellbeing Index.

Only 16% met the NHS guidelines on physical activity, which include 150 minutes of moderate intensity activity and two strengthening activities working all major muscles per week. Almost one in five (18%) said they never exercised at all.

Time was the biggest barrier to meeting physical activity guidelines, cited by 32% of survey respondents.

Sixty-seven per cent of the 2,000 UK workers surveyed considered it the responsibility of their employer to support their physical wellbeing and fitness, yet around one in five rated the support their offered as being below average or very poor.

Westfield Health CEO Dave Capper said: “When it comes to physical wellbeing, the Wellbeing Index shows it’s not really a lack of awareness that’s the problem – people know the risks of a sedentary lifestyle – it’s a lack of responsibility.

“As individuals, only 12% of us are trying to reduce our sedentary time; as employers, we have to recognise just how much the structure of the work day and the office environment contribute to this escalating national health issue.”

Almost three-quarters (74%) of 250 HR professionals polled for the Wellbeing Index agreed that physical activity reduced the number of sick days being taken by their workforce, but 44% said their organisation was not considering more investment in this area.

Organisations also appeared to be lacking the facilities that support physical activity; 47% of employees did not have access to exercise provision such as bike storage, while three-quarters lacked changing and showering facilities at work.

Capper said: “When budgets are tight, it’s always hard to make the case for proactive investment. But ignoring people’s physical wellbeing has a significant impact on the bottom line that’s rarely acknowledged.

“UK businesses spend up to 16% of annual salary costs on absence and absence management. Yes, putting in showers, offering on-site classes or putting in an active space costs money, but the longer-term costs to individuals and companies of ignoring our physical wellbeing is so much higher.”