To improve perceptions of its working environment, Amazon is opening the doors of its UK warehouses to show what its practices are “really” like. Ashleigh Webber visits the online retail giant’s Tilbury site to see how it operates.

Reports of gruelling working conditions at Amazon’s UK warehouses have circulated over the past few years, alleging an environment where workers’ toilet breaks are timed, staff are collapsing due to exhaustion and where employees wear electronic devices to measure the speed at which they work.

Such claims, made mainly by unions, prompted Amazon’s investors to meet earlier this year to decide whether to put pressure on the company by voting against director re-appointments if working conditions were not improved.

Recently, the Sunday Times reported that an ambulance was called to an Amazon warehouse in the UK once every two days last year to assist employees who had broken bones, collapsed or had fallen.

But the online retailer, which was named the UK’s most desirable place to work by LinkedIn earlier this year, has long refuted the claims and suggests that the ambulance call-out figures reported in the media do not tell the whole story.

It is not alone in receiving criticism about its warehouse environments, of course. Sports Direct founder Mike Ashley was hauled in front of MPs in 2016 after a string of revelations about working conditions in the business’s Shirebrook facility and earlier this year warehouses run by two of the UK’s biggest clothing retailers, JD Sports and Asos, were compared to “dark satanic mills” by Unite because of significant numbers of ambulance call-outs.

Amazon invited Personnel Today to visit one if its newest sites in Tilbury, Essex, to debunk some of the myths about its working environment and safety culture.

The Tilbury warehouse, which is the size of about 28 football pitches, is one of the area’s biggest employers with more than 2,000 employees – a number that doubles as the Black Friday and Christmas peak season approaches.

Being one of the newest Amazon sites – there are 21 in total – many of its processes are automated, unlike the Rugeley warehouse in Staffordshire, at which much of the criticism of working conditions has been levelled. Traditionally Amazon’s warehouses like Rugeley have relied on staff picking items from rows upon rows of shelves of stock, but some of its sites like Tilbury now use robots to bring “bins” of items to staff.

“You hear horror stories about people working to insane targets, but in reality people are working at their own pace,” says UK regional safety manager Rob Burnett. “We hire more people [through agencies in addition to its regular employees] to work at the same pace as we get busier. We don’t say to people that they must work four-times as hard.”

While the company does have targets in place, says senior Amazon spokesman David Nieberg, individual workers are not set quantitative pick or pack targets.

“The targets are set at a macro level, based on what the building as a whole can perform at. There’s nothing written down to say this is what the target is,” he says. Employees could also be moved from one station to another based on need during busy periods.

The robots are an example of how automation is shaping the future of work at Amazon. They remove the requirement for staff to walk around the warehouse floor to pick orders, which the company claims makes the environment safer because it reduces the amount of manual handling they do. 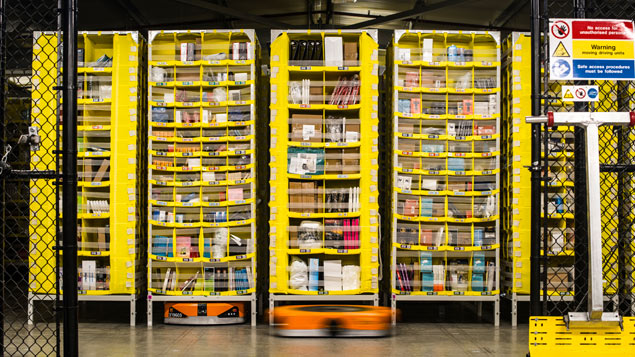 The stock area is surrounded by a fence to prevent workers from wandering into the path of the bins being moved by robots. Should staff need to access the area, for example to pick up an item that has fallen, they must wear a specially designed vest with sensors that send a signal to the robots to slow down or stop when in a certain radius of the wearer, preventing them from being injured. Nobody has been hurt yet, says Burnett.

The technology also means Amazon can offer more digital roles such as robotics engineering, for example. Staff who have been employed by the company for at least a year are able to apply for a programme that sees Amazon pay 90% of their tuition fees if they want to go into higher education and retrain while working for the company.

You hear horror stories about people working to insane targets, but in reality people are working at their own pace,” – Rob Burnett, Amazon

“Jeff [Bezos, Amazon’s founder] believes that if we’re helping to build your future then you’ll probably be a great employee for us,” says Burnett. “The course doesn’t have to be something related to Amazon – for example, we’ve just had a guy in Swansea who’s just gone off to be an acupuncturist.

“It’s a case of motivating our workforce; some people want to further their careers elsewhere, but others love what they’re doing here. Some want to go for a promotion and work their way up.”

Our hosts are keen to point out some of the benefits employees are given. Staff in Tilbury are paid £10.50ph – in excess of the £9 voluntary living wage set by the Living Wage Foundation. This rate is close to the £10.55 it recommends for employers a few miles down the road in Greater London. Staff also have access to private healthcare from their first day in the role.

Burnett says health, safety and wellbeing are vital to Amazon. Throughout the warehouse there are numerous water stations, toilets, first aid stations – all of which are clearly signposted – and vending machines where staff can get personal protective equipment such as gloves and high-visibility jackets. He claims that, despite common belief, toilet breaks are not timed.

As well as UK health and safety legislation it also complies with OSHA standards, set by the US Department of Labor, which requires Amazon to record the use of prescription medication for work-related reasons as a health metric.

Burnett also challenges claims that employees work excessive, exhausting hours. While staff work 40 hours per week, they do so over four days with three days off in a row. Flexible working arrangements are also in place to support staff with other responsibilities, such as children.

While walking through the warehouse the lack of natural light is striking – a strange feeling for a journalist who works in an office with large windows – it’s easy to imagine employees losing their sense of time, or whether it is day or night, during their 10-hour shifts. Although there is an outdoor picnic area for staff to take their breaks, albeit in the car park, it’s not difficult to see why some employees might finish their shift feeling exhausted and disoriented.

HR jobs in distribution and logistics on Personnel Today

However, Burnett claims employees enjoy their jobs at Amazon and says it is often the staff themselves who feel disappointed when they read inaccurate news stories about the company.

“The shame is that there could be a great safety manager out there who will not apply for a job at Amazon because they’ve read these horror stories,” he says. “But most of the staff who apply for roles here really want to work here.

“One of the first things I ask when someone comes in for an interview is whether the [candidate] has read any bad press about us. I’ll get them a tour before we progress any further so they can see what working conditions are really like.”

Amazon makes sure staff are responsible for reporting and acting on health and safety issues too by getting managers to carry out two “safety circles” per week. These involve a 15-minute tour of an area followed by a discussion of any health and safety issues they have seen. Amazon measures how many employees have had a safety circle tour as an indication of managers’ performance.

There are multiple methods for staff to make a suggestion or voice concerns, such as surveys when they log in for their shift and “associate forums” where staff meet in a formal setting to raise issues, which are then passed on to management each month.

One of the most popular methods is the “Voice of the Associate” whiteboards located throughout the site. Employees raise a concern or make a suggestion on the board and managers have one working day to respond to it.

“One of the success stories is that the associates wanted some kind of outdoor area, so we put a picnic area in place. They were also asking to be able to swap shifts, so we introduced that system,” said Nieberg.

With Amazon employing around 30,000 people in the UK, the Tilbury site houses just a small proportion of its workforce and, admittedly, our visit took place on a Wednesday morning when the site was unlikely to have been running at full capacity. Had our visit taken place during the Black Friday sale we would have observed a much busier warehouse.

But with Amazon now offering free public tours of its UK fulfilment centres, including the Rugeley site, public scrutiny is likely to help improve working conditions and encourage the business to act on concerns.

Disabled staff work the ‘next two months for free’

I’ve not been inside an Amazon warehouse I admit, so will not comment on what I do not know. However try this shift which is on offer (and being employed) at an Amazon warehouse at this minute.
60 hrs over a 6 day week. 00.30 to 11.00 nightshift and half hour unpaid break. Given its location and lack of parking then the operatives are out on work related activity for 12 hrs per day with only one day off.

Now I know some may say it’s their choice and the money is good (only if you work the excess hours mind you), but at some point you have to accept that it’s not a beneficial long term employment – only many people don’t have much choice over that.

Ready for Bounce Back Monday?

How an understanding of mental workload can boost...

Back to the office: Olly Olsen talks to...