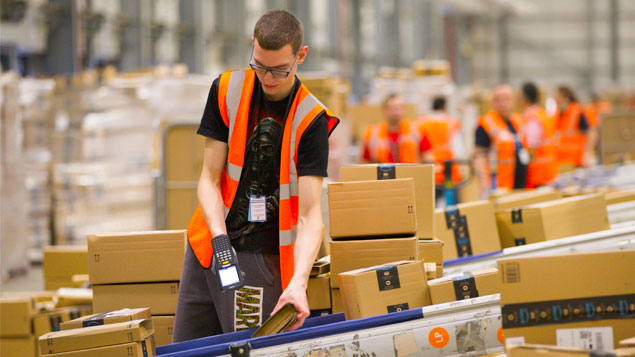 Amazon is to increase its minimum wage in excess of the level recommended by the Living Wage Foundation for almost 40,000 permanent and temporary staff.

Amazon staff currently earn a minimum of £8 an hour and £8.20 in London.

But while billionaire Amazon founder Jeff Bezos said that the company “listened to our critics, thought hard about what we wanted to do, and decided we want to lead”, the pay increase has received criticism from the GMB union.

The union’s general secretary Tim Roache said: “I’m glad Amazon has heeded GMB union’s long-standing calls to pay people, at the very least, the minimum they need to live – though given their owner is the richest man in the world you’d think he could see fit to dig a little deeper, but it’s a start.

“Now they’re paying the living wage, maybe Amazon could pay their taxes too, and do something to improve the horrendous working conditions people endure in their warehouses.”

Earlier this year the union accused Amazon of treating its warehouse staff “like robots” by putting them under pressure to meet strict targets.

“GMB has heard horrific tales from the shop floor, of a woman in late pregnancy having to stand for a 10-hour shift, hundreds of ambulance call outs to Amazon warehouses and nearly 90% of our Amazon members saying they experience constant pain at work,” said Roache.

“GMB are ready and willing to help sort that out, but they won’t let a trade union through their doors. So this isn’t ‘job done’ by any stretch.”

An Amazon spokesperson said: “Amazon is a safe place to work, in fact according to the UK government’s Health and Safety Executive RIDDOR, Amazon has 43% fewer injuries on average than other transportation and warehousing companies in the UK.

“The facts clearly show allegations to the contrary are simply wrong and misleading when attempting to portray Amazon as an unsafe workplace.”

The online retail giant employs 17,000 people in the UK and plans to recruit 20,000 seasonal workers for Christmas.

Temporary staff will also be paid the new, higher rate, as well as those hired through recruitment agencies.

Doug Gurr, Amazon VP and UK country manager said the wage increase will “impact more than 37,000 employees across the country, resulting in higher pay for them and their families.”