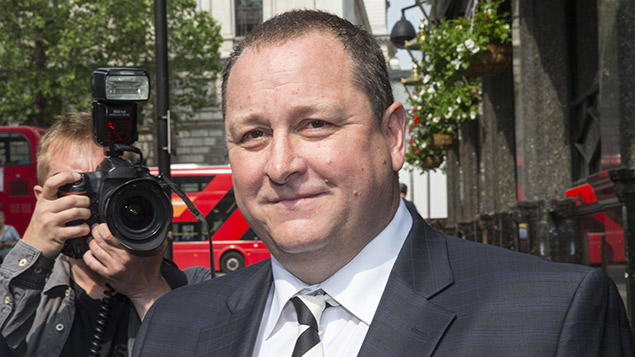 Sports Direct founder Mike Ashley faced a host of allegations of exploitation and mismanagement of workers in front of the Business, Innovation and Skills select committee this morning.

The retail billionaire and Newcastle United owner had previously refused to appear before Parliament but this weekend agreed to attend the committee to defend Sports Direct’s “good name”.

It would have been impossible to have grown the way we have… without the use of agencies. Internet growth was never envisaged 10 years ago” – Mike Ashley

However today, the select committee heard a raft of shocking allegations including reports that new female employees in the Shirebrook warehouse were referred to as “new meat”, and that a warehouse worker gave birth in a toilet.

On Monday, Ashley sent a letter to staff, admitting that Shirebrook, the centre of most of the allegations facing the retailer, needed some improvements to security procedures.

He added that chief executive Dave Forsey would not receive his £4m bonus due to the “difficult year”.

Earlier in 2016, a freedom of information request revealed that ambulances had been called to the warehouse facility 76 times in two years, while former workers spoke out of being “too scared” to take sick leave because they feared losing their jobs or not being given any more hours.

It was also claimed that Transline, a recruitment agency supplying workers to the warehouse operated a “six-strike” policy where workers would receive a “strike” against their name for offences such as excessive chatting, too-long toilet breaks or using a mobile phone in the warehouse.

An exposé by The Guardian last year found that workers at the Shirebrook warehouse had been subjected to rigorous security searches and surveillance, creating a bottleneck when they left work for which they were not paid.

Evidence produced at the select committee today revealed that workers were offered 336 guaranteed hours per year, after which employees would revert to a zero hours arrangement with no guaranteed hours. The union Unite alleged that workers who raised a grievance with the company after their allotted 336 hours would often be denied further work.

Steve Turner, Unite’s assistant-general secretary, said: “Employees would find themselves in and out of work, reliant on benefits when they weren’t working, making it difficult to have a sustainable income.”

Unite’s members also highlighted a “culture of fear”, where staff would turn up even if they were ill. “There is no place for these 19th-century practices in 21st-century Britain,” added Turner.

Ashley responded to the allegations made against him as follows:

Ashley told the committee that Sports Direct is undertaking a review of working practices, but that “it will never be completed” because improvement would be an ongoing process.

He admitted that some of the revelations, for example about security bottlenecks, had come as an “unpleasant surprise”, claiming that he walks the floor in the Shirebrook warehouse once a week and eats with workers in the canteen three times a week.

On suggestions that he consulted with unions too infrequently on working conditions, he added: “I believe I can do a better job for employees at Sports Direct than Unite.”

Many of the allegations were rebutted with Ashley claiming he was not aware of how particular areas were managed or what systems were in place.

On whether there were any mechanisms in place to benchmark employee engagement, for example, he said he did not read these reports, saying: “I’m told we have a process in place, but there would be no point in me reading a report I wouldn’t understand.”

Asked whether the company had outgrown his ability to manage it, he said “probably”, comparing the growth of the company to becoming an “oil tanker” which was harder to control.

He said that the culture of the company was “hardworking” and should come with “high rewards”. He said: “The value in Sports Direct is the people.” And when asked “You value the people more than anything?”, he replied “Correct”.

Ashley said he would specifically review the six-strike system over the next 90 days, and that he would get back to Parliament if this process was likely to take longer.

He added that the committee was pushing “against an open door” and that he would do his best to improve the corporate governance at Sports Direct, although made no commitment to rethinking the management structure or addressing every single allegation made against him.

He concluded that “the buck will always stop with me… it can’t be anyone else” and if an independent body was commissioned to do a review into working practices, he would accept it. “I’m not Father Christmas. I’m not sitting there saying I’m going to make the world wonderful. You just have to get a balanced view and say as an individual, would you tolerate that, is that fair? If I honestly believe it isn’t, I change it.”

Ben Willmott, head of public policy at the CIPD, commented: “The working practices that have been raised today are very concerning. The CIPD absolutely condemns any illegal employment practices, and will of course back appropriate penalties for any organisation committing such offences.

“However, today’s testimony also highlights the need for organisations to do much more than simply follow the word of the law in order to create good, sustainable workplaces that value people and safeguard their physical, mental and financial wellbeing.”