Apprentices: do you understand their legal status? 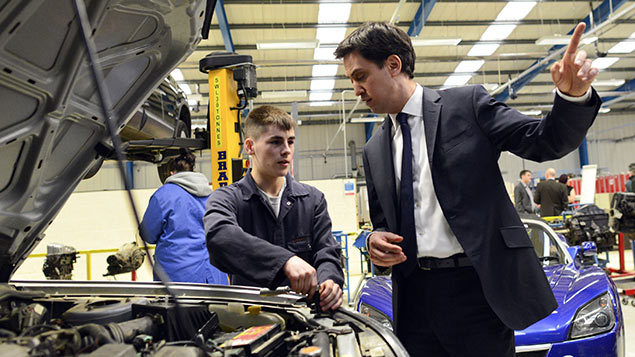 Ed Miliband said last week that as many school leavers should go into apprenticeships as go to university. Photo: REX/Stephen Simpson

With both Labour and the Conservatives pledging to create more apprenticeships after the next general election, William Downing and Sara Thompson set out what employers thinking of taking on apprentices need to know about their legal status.

House of Commons Library statistics show there were 510,200 new apprenticeship starting in the academic year 2012/13, an increase of around 80% from 2009/10. With so many employers providing apprenticeships, it is important to be clear on their legal status. Can you treat apprentices as “normal” employees or do they have additional rights?

The traditional apprenticeship has been a two-party arrangement between a master craftsman and an apprentice, generally lasting for a fixed term, under which the apprentice is trained in the master’s skill and works under a contract of apprenticeship. It differs from a contract of employment, as the primary purpose of the contract is training and not work.

Traditional apprentices are employees, but they have enhanced protection against dismissal. They cannot be made redundant unless the business actually closes or its fundamental nature changes. A conduct dismissal requires more extreme misconduct than for a normal employee, with one old case going so far as to say that the apprentice must be “virtually unteachable”.

An apprentice wrongly dismissed before the end of his or her contract can be awarded an enhanced claim for damages with compensation, not only for loss of earnings and training for the entire remainder of the apprenticeship, but also for loss of future career prospects.

In 1994 the Government introduced what it called “modern apprenticeships”, which were rebranded as simply “apprenticeships” in 2004. These were generally three-party arrangements between the employer, the apprentice and an external third-party training provider, often supported by government funding. The apprentice would obtain a nationally recognised qualification, either at NVQ level 3 (equivalent to two A-levels) or at NVQ level 2 (equivalent to five GCSEs).

It might be thought these statutory apprenticeships had little in common with the traditional idea of apprenticeships. However, the courts decided that – even though the training was provided by a third party – it could still amount to a contract of apprenticeship, bringing with it an apprentice’s enhanced protection from dismissal. Such a situation was clearly less than appealing from an employer’s perspective.

However to be an apprenticeship agreement, certain conditions must be fulfilled. These are:

A failure to meet any one of these conditions risks the arrangement being viewed as a contract of apprenticeship with its enhanced protections.

Future of the statutory apprentice

The Government plans to reform apprenticeship agreements in England, although they will remain in their current format in Wales. The changes will be made under the Deregulation Bill that is due to receive Royal Assent in 2015 and are aimed at simplifying the current system. It will also introduce the “approved English apprenticeship”. Like the apprenticeship agreement, it will be a contract of service (not an apprenticeship) and have to meet similar conditions.

The funding changes, due to be introduced in 2016, seem likely to increase the financial costs to employers, although the final model to be adopted has not yet been decided.

About William Downing and Sara Thompson

4 Responses to Apprentices: do you understand their legal status?