By ADVERTORIAL on 5 Aug 2014 in Discrimination 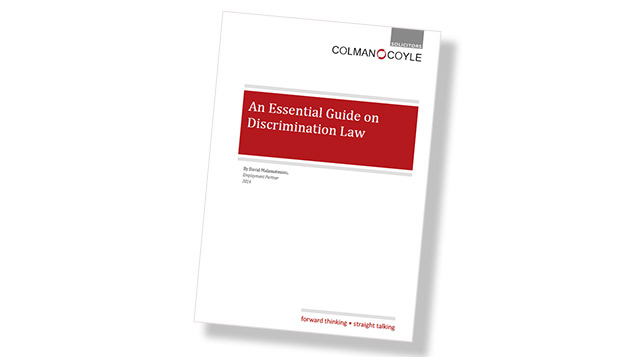 UK discrimination law exists to protect workers from discrimination in the workplace. Unfortunately whilst there are genuine cases of discrimination every year the legislation is often used and abused by employees seeking redress in cases where they do not have a legitimate complaint. In fact, discrimination has assumed a massive prominence in employment law since the Race Relations Act came in to force in 1965, thereby increasing the opportunities for employees to make complaints and bring tribunal claims. The number of characteristics protected from discrimination has grown, often as a consequence of European Directives, making this area a minefield for HR managers.

When considering an employees complaint of discrimination HR Practitioners should keep the following 3 factors in mind:

1) High compensation payments and expensive litigation – there is no limit to the amount of financial loss that can be awarded in a successful case and discrimination claims are often complex, expensive and incur significant management time, which are usually not recoverable.

2) Allegations of discrimination can attract coverage from the press and create bad publicity for an employer. They can also significantly damage staff morale.   Discrimination and harassment issues are usually highly emotional and controversial.

3) It is often not possible to appreciate an employee’s rights in a given area without considering whether or not there are discrimination law implications.  For instance, a decision to dismiss an employee on the basis of medical incapacity may also have discrimination law implications (if the medical incapacity can be characterised as a disability under the Equality Act).

UK Discrimination Law is now comprehensively set out in the Equality Act 2010, which is designed to ensure equality of opportunity at work, to protect employee’s dignity and to ensure that complaints can be raised without fear of reprisal.

The Equality Act aimed to harmonise discrimination law but has in fact made it more complicated. The Act is a vast statute extending to 218 sections and 28 schedules. ~

Download Colman Coyle’s Essential Guide to Discrimination Law to help navigate you through this complicated area.