Keeping on top of contractual obligations

By Personnel Today on 8 Jul 2013 in Employment law 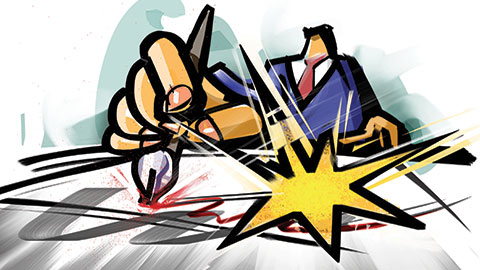 A company-wide announcement may lead to binding contractual obligations, as a recent case illustrates. Solicitor Peter Finding discusses what this means for employers.

We all recognise the need to retain and motivate employees. This often involves making verbal commitments, whether these are to pay a bonus, enhance a benefit or promise a pay rise. But what happens when circumstances change and that commitment is no longer commercially viable? Is the commitment still binding or can the employer change its mind?

The recent Court of Appeal decision in Dresdner Kleinwort Ltd & Commerzbank AG v Attrill & ors [2013] EWCA Civ 394 (Attrill) highlights how an employer can find itself having to honour this type of commitment, even where nothing has been agreed in writing.

Amid rumours of a potential sale, employees of Dresdner Kleinwort Investment Bank (DKIB) were growing increasingly restless and disaffected. The Financial Services Authority (FSA) was sufficiently concerned to place DKIB on its list of firms to monitor closely – the FSA has since been replaced by the Prudential Regulation Authority and the Financial Conduct Authority. In order to avoid a mass exodus of employees, which could have resulted in DKIB’s collapse, DKIB put together a retention package.

In August 2008, DKIB’s CEO Dr Stefan Jentzsch announced the retention package at a “town hall” meeting that all relevant staff were invited to attend, either virtually or in person. Jentzsch was in Frankfurt, but the announcement was broadcast on DKIB’s intranet and was watched by employees on their computers and on communal TV screens at offices around the world. Jentzsch told staff that a “guaranteed minimum bonus pool” of €400 million had been created, and that the pool would be allocated to employees later in the year on a discretionary basis by reference to individual performance. This message was passed on by senior managers to any members of staff who had missed the meeting. At this time, Jentzsch had every intention that DKIB would pay the bonuses as announced.

DKIB was subsequently sold to Commerzbank, which received significant financial support from the German government. Concerned not to be seen to be paying taxpayers’ money directly to the employees of a loss-making bank, the new owners pressured DKIB into finding a way to avoid paying the bonuses, either in full or at all. In December 2008, DKIB sent letters to its employees, informing each individual of the value of their provisional bonus award. These provisional awards were based on the pool of €400 million.

However, the letters contained a clause that sought to allow DKIB to reduce the bonuses in the event of an adverse change in circumstances (“the adverse change clause”). When the bonuses were paid the following spring, the bonus awards were reduced by 90% in reliance on that clause.

In a three-and-a-half-year legal fight, 104 employees sued both banks in the UK, claiming that they were contractually entitled, as a result of Jentzsch’s August 2008 announcement, to bonuses at the level initially communicated to them. In April 2013, the Court of Appeal found in favour of the employees.

DKIB’s attempt to limit its obligation to pay bonuses by including the adverse change clause was unsuccessful, as the provision unilaterally sought to cut across the contractual promise made by Jentzsch in the August announcement. The Court of Appeal found that the attempt to introduce the provision was a breach of the implied term of trust and confidence on which all employment relationships are founded. Such a finding can have serious consequences, including enabling an employee to resign and claim that she or he has been constructively unfairly dismissed, and/or releasing her or him from any post-termination restrictions.

What does this mean?

Following the decision in Attrill, it is clear that an “all staff” announcement can give rise to a contractual obligation to pay a benefit, even if the announcement is general in nature and does not give any individual an expectation that they will receive benefits of a certain value. It is apparent, therefore, that an employee may be able to successfully bring a claim for a “contractual” benefit even if he or she is not able to value the claim.

The principles on which Attrill was decided are not restricted to bonuses. Any oral announcement – for example, a commitment to make an enhanced redundancy payment – could be held to be contractually binding, provided it is sufficiently certain in its terms and an intention to create legal relations can be properly inferred.

There is, therefore, a need to word oral announcements as carefully as equivalent written communications where they may give rise to contractual obligations. In particular, using words such as “guaranteed”, “definite” and “minimum” will leave little room for manoeuvre should you later need to pull back from the original promise.

It is also evident from the Court of Appeal’s decision that the spectre of unfortunate political implications will not prevent contractual obligations being enforceable. The Court identified that Commerzbank’s desire to step back from the promise to award a bonus pool of €400 million arose only as a result of the potential political embarrassment associated with making the payments. The Court’s view was straightforward – DKIB made a promise to its employees, and that promise had to be honoured regardless of political nuances.

The decision in Attrill has highlighted the difficulties employers will face if they unilaterally seek to pull back from an initial contractually-binding commitment made to employees. In making announcements of this sort, therefore, employers may wish to reserve the right to amend or withdraw the benefit in the event of adverse changes in circumstances – for example, a fall in profits – but this would have to be communicated at the same time as the initial announcement.

In the absence of a right to reduce benefits, employers will struggle to avoid the obligation to pay the promised benefit. Determined employers may seek to rely on the principles of frustration – namely that the relevant agreement can no longer be effected – and therefore falls away. Such arguments, however, are likely to succeed only in exceptional circumstances – for instance, where a promised bonus exceeds a subsequently imposed statutory cap.

The decision in Attrill is a timely reminder that promises that do not look or feel like contractual terms can be treated as binding and, therefore, enforceable. The message from the courts is simple – make sure your mouth isn’t any bigger than your wallet.

Peter Finding is an associate at Burges Salmon LLP