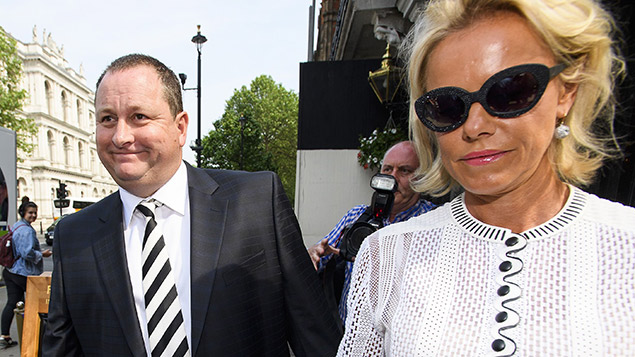 Sports Direct is founded on a business model that enables the majority of workers to be treated “without dignity or respect”, according to damning report from a committee of MPs.

The report into employment practices at the UK’s largest sports retailer found that Mike Ashley, founder and majority shareholder, must be held accountable for the “appalling” working conditions and practices at Sports Direct’s shops and at its Shirebrook warehouse in Derbyshire.

Iain Wright, chair of the Business, Innovation and Skills Committee, said: “The evidence we heard points to a business whose working practices are closer to that of a Victorian workhouse than that of a modern, reputable high street retailer.

“For this to occur in the UK in 2016 is a serious indictment of the management at Sports Direct and Mike Ashley, as the face of Sports Direct, must be held accountable for these failings.”

The report said that although Sports Direct is a particularly bad example of a business that exploits its workers in order to maximise its profits, it is unlikely to be the only organisation that operates in such a way.

“The business model as operated by Sports Direct, both at the Shirebrook warehouse and in the shops across the country, involves treating workers as commodities rather human beings,” said Wright.

“Low-cost products for customers, and profits for shareholders come at the cost of maintaining contractual terms and working conditions which fall way below acceptable standards in a modern, civilised economy.

“This model has proved successful for Mr Ashley and there is a risk this will become much more the norm in Britain.”

In evidence last month, Ashley admitted workers had effectively been paid below the national minimum wage and that Sports Direct had become too big for him to control. The committee also heard accounts of worker mistreatment, including staff being penalised for taking a short break to drink water and for sickness absence.

Allegations also surfaced of some workers being promised permanent contracts in exchange for sexual favours. Other evidence suggested serious health and safety breaches, with repeated ambulance calls to Shirebrook including, in one case, for a woman who gave birth in the toilet.

We heard no convincing reason why Sports Direct engaged the workers through agencies on short-term, temporary contracts, other than to reduce costs and pass responsibility” – BIS Committee

“It’s seems incredible that Mike Ashley, who visits the Shirebrook warehouse at least once a week, was unware of these appalling practices.”

The workers at Sports Direct’s warehouse in Shirebrook are employed by two agencies, The Best Connection Group and Transline Group. The committee found the employer-worker relationship is not straightforward. It added that Sports Direct appears to exert a strong grip over these agencies, but the agencies take on the responsibility of employing the workers, providing them with poor terms and conditions, and paying them rates which at times have fallen below the minimum wage.

The report also raises concern about the legality and fairness of voluntary schemes employed by these agencies, such as pre-paid debit cards and insurance services, and it has called on the Gangmasters Licensing Authority to look into these practices.

The committee welcomed Ashley’s commitment to review the agencies’ “six strikes and you’re out” policy within 90 days, saying they “look forward to hearing the outcome”.

The report also concluded that many agency workers at Shirebrook have been working there for many years. It is open 365 days a year, 24 hours a day, and the nature and flow of business activity in the warehouse can be forecast with some accuracy.

“We heard no convincing reason why Sports Direct engaged the workers through agencies on short-term, temporary contracts, other than to reduce costs and pass responsibility,” said the MPs.

They did not accept that the advent of the internet – a reason given by Ashley to use agencies to supply the bulk of the workforce – as sufficient.

The Committee’s report finds it irresponsible, if not reckless, that Sports Direct pays £50 million to Best Connection and Transline when these agencies “do not seem to have a basic understanding of employment law and practices”.

The report found that the representatives of the two agencies gave “woefully poor and, in some cases, incorrect” evidence, including statements made by Transline, which have subsequently been shown to be false by the Gangmasters Licensing Authority.

The Committee said it believed Transline deliberately misled the committee in their evidence. “In view of the seriousness of this action, which could be considered a contempt of Parliament, we invite Transline to respond, within two weeks… to explain how their evidence was not deliberately misleading, before we consider what further steps to take.”

The MPs said they were pleased that, following oral evidence to the committee last month, Sports Direct had started to engage with Unite, the union with collective bargaining rights for Shirebrook’s directly employed workers, which also has members who work for the agencies.

If the Prime Minister is serious about tackling corporate abuse, then she should start in our workplaces by restoring security, decency and fairness to working life” – Steve Turner, Unite

A spokesman for Sports Direct said: “We will study the contents of the Committee’s report very carefully. It is our policy to treat all our people with dignity and respect.

“We are pleased to see that the Committee has recognised Mike Ashley’s commitment to engage in addressing any shortcomings in the working practices at Sports Direct.”

Steve Turner, Unite’s assistant general secretary, said: “The committee and those we have worked with in the media to expose what has been going on at Shirebrook are to be congratulated for this investigation. Unite is pleased that we are now in the early stages of dialogue with Mr Ashley about how the serious problems at Shirebrook can be put right.

“But the way to put things right at Shirebrook is simple – put the workers on fixed hour, permanent contracts. Give them some security and the dignity they deserve.”

Turner continued by saying that Shirebrook is not an isolated incident. “The sad truth of the matter is that where people can be hired and fired at whim, bad bosses are never far away. If the Prime Minister is serious about tackling corporate abuse, then she should start in our workplaces by restoring security, decency and fairness to working life.”

Transline Group released a statement saying its representatives attended the committee to give a transparent account of operations at Shirebrook.

“No incorrect or misleading information was given, and we will respond to the committee on any and all issues raised within the report within the two-week deadline stipulated,” said the employment agency.

“Transline remains committed to ensuring a safe working environment and fulfilling its duty of care to our employees.”