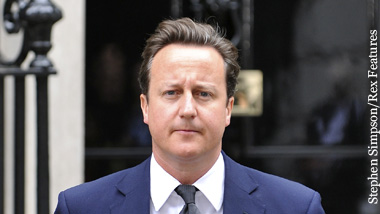 Prime Minister David Cameron has said he will “change the law” to allow people to wear religious symbols in the workplace, after he was asked during today’s Prime Minister’s Questions (PMQs) about the Eweida case.

Nadia Eweida, a former British Airways employee, is soon to have her religious discrimination case heard at the European Court of Human Rights. Eweida was sent home by BA for wearing a visible crucifix around her neck in breach of the company’s dress code, and claimed religious discrimination and harassment. So far, she has been unsuccessful at the employment tribunal, employment appeal tribunal, and Court of Appeal.

During PMQs, Conservative MP David Davis said to Cameron: “On 4 September, the European Court of Human Rights is hearing the case of Miss Nadia Eweida, the lady who lost her job at BA for wearing a crucifix as a mark of her Christianity.

“The behaviour of BA in this was a disgraceful piece of political correctness.

“So I was surprised to see the Government is resisting Miss Eweida’s appeal. I cannot believe that the Government is supporting this oppression of religious freedom in the workplace, so what are we going to do about this sad case?”

Responding to Davis’s question, Cameron said: “I fully support the right of people to wear religious symbols at work; I think it is absolutely a vital religious freedom.

“What we will do is, if it turns out that the law has the intention, as has come out in this case, then we will change the law and make clear that people can wear religious emblems at work.”

However, Cameron’s pledge to change the law to allow the wearing of religious symbols at work has been criticised by employment law experts.

Darren Newman, employment law trainer and XpertHR contributing editor, said: “The Government has made it clear that it is opposing the application to the European Court of Human Rights by Miss Eweida and others. Given that fact, the Prime Minister’s comments today are puzzling.

“But, there is a lot of misunderstanding about this case. BA did not ban employees from wearing a cross. They simply had a strict dress code preventing any additional visible jewellery being worn unless it was a religious requirement. It is worth remembering that BA’s attitude to Miss Eweida’s necklace was not about the fact that it was a cross – it was about the fact that it breached the dress code. Any non-religious necklace would have been treated in the same way.

“Miss Eweida herself accepted that wearing her cross was a personal preference and not a requirement of her religion. What the European Court of Human Rights has to decide is whether or not, in refusing to make an exception for Miss Eweida, BA unjustifiably interfered with her freedom to manifest her religious beliefs. Previous case law from the Court suggests that she faces an uphill battle given that wearing a cross – much less wearing it above a uniform – is not a requirement of her religion.

“Specifically changing the law to allow religious symbols to be worn seems an unnecessary step. There is no rule banning religious symbols at work and the issue has only arisen in a tiny number of cases. It is generally a bad idea to change the law to accommodate unusual cases that just happen to have received a lot of publicity. Any new law would cause more problems than it solved and lead to considerable uncertainty. Would all religious symbols be allowed? What about religious slogans? The potential for argument and costly litigation is enormous.”

XpertHR employment law editor John Read added: “I agree with Darren’s cautionary comments. As it currently stands, discrimination law basically prevents the detrimental treatment of employees because of a protected characteristic, including religion or belief. It does not provide a blanket right for employees to manifest their religion or belief at the workplace in whatever way they choose – although it does not ban expression of belief either.

“If the Government changes the law to give employees an express right to wear religious symbols at work, it could not be limited to just visible crucifixes, and case law has shown that a very wide range of beliefs are capable of being protected under the Equality Act. If religious symbols were positively allowed, then arguments that employees should be given an express right to manifest their beliefs at the workplace in other ways would certainly follow, even if, like Eweida, these manifestations were not required by the religion or belief in question. This could create chaos for employers.”

For more information on this topic, see XpertHR’s quick reference guide to accommodating religious observance through clothing and appearance.

XpertHR also has further detail on the Eweida case.