Largest university in UK hit by boycott over outsourced staff 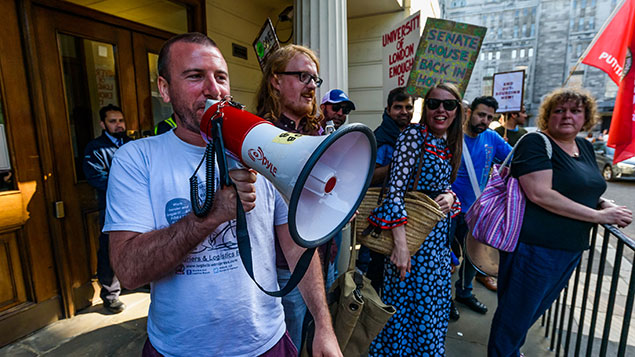 Jason Moyer-Lee of the IWGB at Stewart House at the University of London in May in support of protesting outsourced staff. Photo: Peter Marshall/PA Images

Academics, students and leading politicians have launched a boycott of the University of London in support of outsourced workers who have demanded equal terms and conditions with directly employed staff.

The campaigners, who include shadow chancellor John McDonnell MP, the National Union of Students and several leading professors, want the university to end outsourcing and directly employ the workers who provide cleaning, catering, security and other services.

The workers themselves, of whom there are around 250, have been campaigning with the support of the Independent Workers Union (IWGB) since 2017 and took strike action earlier this year.

Supporting the boycott, Kings College London lecturer Nick Srnicek said: “At a time when university vice chancellor pay is surging across the country, it is an outrage that the least well-off workers of the university continue to face a situation of hyper-exploitation and abuse.

“Yet there’s an easy solution to immediately improve the lives of the workers that keep the university running: join numerous other universities in bringing them back in-house and paying them a decent wage.”

The campaigners said that the university had gone back on a commitment made in May to bring all workers in-house and that now only a small proportion of the workers would be made direct employees next year.

The IWGB said most of the workers would remain outsourced at least until their contracts were up for tender in 2019, 2020 and 2021. At that point an in-house bid was likely to be presented alongside other commercial bids, which the union claimed would “leave the door open for the workers to remain outsourced indefinitely”.

The University of London, the UK’s largest university in terms of student numbers, has 18 member institutions including prominent academic centres such as UCL, Goldsmiths, King’s College London, City, Birkbeck, the London School of Economics, the Royal Academy of Music and Royal Holloway. The university has about 160,000 campus-based students and 52,000 external students.

There’s an easy solution to immediately improve the lives of the workers that keep the university running: join numerous other universities in bringing them back in-house and paying them a decent wage” – lecturer Nick Srnicek

Among the IWGB’s allegations was that the workers, who are often from ethnic minority and migrant backgrounds, have suffered “a regime of bullying and discrimination”.

The union said it had handled more than 50 complaints on behalf of outsourced workers at the university so far this year.

In July it raised a complaint over one senior manager, who supervised workers at the university and was employed by an outsourcing firm, having connections to the far right.

Union members had noticed that the manager’s social media contained a homage to Enoch Powell, disparaging comments about immigrants and support for Stephen Yaxley-Lennon (known as Tommy Robinson). The manager no longer supervises workers at the university.

The IWGB pointed out that the grievances of employed staff were taken much more seriously than those by outsourced workers.

The University of London’s administrative centres, such as Senate House and the Warburg Institute, near Russell Square in central London, are the focus of the boycott with academics, politicians and specialists being asked not to attend any events in those locations until the outsourced staff are offered equal terms and conditions with directly employed staff. The union hopes this will put pressure on the university because events at these centres generate revenue of about £40m each year.

The University of London has been contacted by Personnel Today for a response.