University cleaners to strike against outsourcing

By Rob Moss on 15 Mar 2018 in Industrial action / strikes, Outsourcing 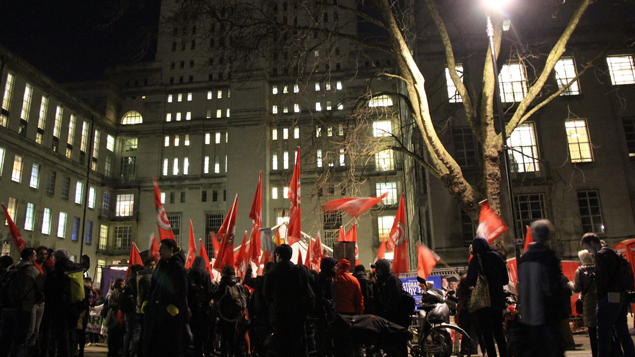 Workers protest outside Senate House at the University of London
Photo: IWGB

University cleaners, porters and receptionists are expected to walk out next month after a near unanimous vote in favour of industrial action.

The workers, employed by outsourcing companies that have contracts with the University of London, are demanding to be made direct employees of the university, and for equal terms and conditions with those that are directly employed.

IWGB president Henry Chango-Lopez said: “The University of London has revealed the absolute contempt that it has for the workers that keep it running day after day by ignoring their repeated calls to be brought in-house. We will not stop until all workers are made direct employees with equal terms and conditions as in-house staff.”

University of London cleaner and IWGB representative Margarita Cunalata said: “The university has done its best to deny workers like me basic rights and we have had to fight for everything, from the London Living Wage to basic sick pay. All we ask for is equality and we will keep on fighting until we get it.”

The strikes, organised for 25 and 26 April, are part of the IWGB’s “Back In-House” campaign, which is calling on the university to end outsourcing, to abolish zero-hours contracts and to implement pay rises it promised six years ago, but failed to deliver.

The IWGB said it had been left with no option but to escalate its campaign, as the university has “consistently denied the outsourced workers and their union, the IWGB, a voice in this process”.

The IWGB is the largest union at the University of London central administration buildings, which includes Senate House. The outsourced workers taking industrial action work for Cordant Security, Cordant Services and Nurture.

A spokesperson for the University of London said: “The IWGB is involved in a long-running dispute over the terms and conditions of security guards, post-room workers, AV staff, porters and receptionists employed by the university’s contractors Cordant.

“The university has already begun a review of the performance of the university’s contracted facilities management services and as part of that review will be discussing with the contractor the pay, conditions, benefits and development opportunities for the contractor’s employees.”