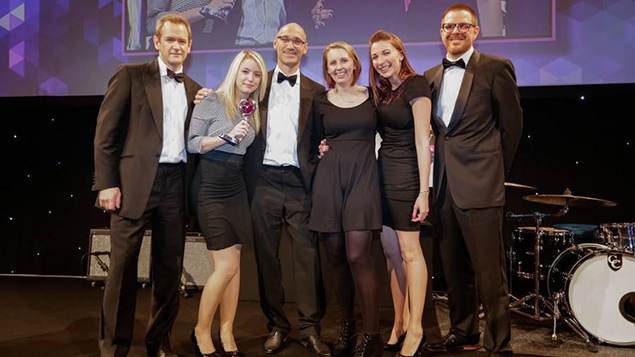 Random House collect their award for Health at Work at the Personnel Today Awards 2013.

Like most knowledge-based industries, publishing offers a highly sedentary working environment. At Random House Group (which merged last year with Penguin to become Penguin Random House), the company had a high claims history with its medical insurer, with a particularly high level of musculo-skeletal complaints.

At the same time, there was a feeling that more could be done to offer health and wellbeing services to its employees, who often worked long hours and couldn’t afford to pay for expensive fitness classes in central London. “We could have just offered a gym membership – it’s off the shelf and suits some people, but we wanted to do something more creative,” says Neil Morrison, group HR Director for UK and international companies at Penguin Random House.

Therefore, the company surveyed its employees, with employee representatives canvassing their teams for opinions on health interventions that might work. It also set up a wellbeing committee, comprised of HR, facilities and communications staff, which liaises with the staff forum for feedback and ideas.

The result was a diverse mix of programmes, from workshops on everything from nutrition to sleep habits, to full-on fitness classes in a custom-built wellbeing studio. “We listened to what people wanted and there was also a degree of trial and error. If something didn’t work, we could always cancel a class or change a teacher,” says Morrison.

And while there was some capital investment needed to build the studio and shower block, this was offset by simple and inexpensive initiatives such as a “wellbeing week”, which featured local suppliers willing to offer discounts on their health and wellbeing services. Previous focuses for wellbeing at Random House include encouraging staff to drink more water or take the stairs rather than the lift, proving that improving employees’ health does not require a major cash investment.

There has been a positive commercial outcome, too. Insurance premiums decreased by around £60,000 between 2010 and 2013, and medical insurance payments reduced from £33,000 per month in the year to April 2010 to £19,000 a month since April 2012. “There was a cost benefit, yes, but our overall goal was to improve the wellbeing of the workforce,” says Morrison. Encouragingly, 58% of workers have reported a reduction in stress levels, and last year the proportion rating their health as good or excellent was 78%.

Now that the company has expanded through a merger, the wellbeing team will be making sure that the wellbeing programmes are extended to all of the new employees. One of the key upcoming themes will be mental health.

When Random House Group scooped the Personnel Today Award for Health at Work in 2013, it faced competition from employers offering a wide variety of wellbeing schemes, so why did it stand out? “I think we stood out because we’d left it long enough after starting the programme to have a decent amount of data. We could show the value of what we’d done over a couple of years,” explains Morrison. “We also tailored it to specific issues affecting our business.”