World of Learning 2014: innovation is what you need

By Martin Couzins on 9 Oct 2014 in Learning & development, e-learning 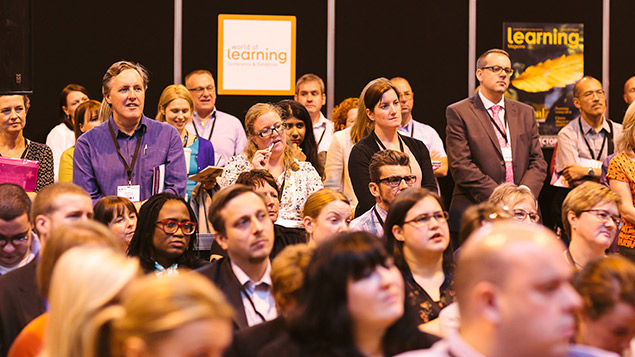 Delegates at a World of Learning Conference

Martin Couzins reports on last week’s World of Learning 2014 conference in Birmingham, where innovation and future trends in learning and development were major themes.

Innovation in learning and development will speed up if organisations collect data and evidence to prove what is working and then act on it, proclaims Robin Hoyle, chair of the conference.

This was neatly demonstrated when Jason Pitfield, training manager at insurer Liverpool and Victoria (LV), told delegates how his business uses data to identify learning needs and evaluate success.

World of Learning 2014 – quotes from the conference

“Without your own passion you cannot deliver passion in your organisation.”
Robin Hoyle, chair, World of Learning conference

“Sharing our strategy as a visual story helped people understand how they fitted in with the strategy.”
Jonathan Bunn, communications director, EMEA, Metlife

“Using reverse mentoring as a part of our on boarding provided leadership opportunities for new recruits and enabled a mutual sharing of knowledge.” Nigel Spencer, global director of L&D, Reed Smith

“We decided to use gamification because employees were bored of e-learning and we needed to build some buzz around it.”
Stephen Evans, design and delivery manager of digital learning channels, Boots

“A learning management system is an infrastructure, not a course.”
Craig Weiss, CEO, E-learning 24/7

“What has happened in technology should have changed training but it hasn’t yet because we have been too conservative.”
David Cavallo, research scientist and director of the future of learning group at the Massachusetts Institute of Technology.

When LV had to rapidly increase the number of customer service employees, Pitfield needed to enable them to start doing the job as soon as possible. To do this, he asked the business exactly what was needed and focused on what those employees needed to know.

He then designed a learning programme which reduced the time it took for new starters to talk directly with customers from six weeks to three days.

Three-quarters of that learning delivery took place out of the classroom and most resources were put into post-learning support by buddying up colleagues. By reducing classroom time, LV saved £250,000. By reducing time spent on learning, the company generated £1 million in added revenue.

Pitfield told delegates that they needed to be brave to innovate, because there will be objections from the business. This is the reason he chose to pilot the new process, mainly focused on e-learning, with smaller teams. This pilot phase generated evidence that the process worked and that enabled him to extend it across the business.

“Having data leads to a mature conversation around what you are trying to change,” he said.

“As the L&D team, we used to be brought in last on projects. Now we are brought in first because we focus on adding value. It is a much better place to be. Trainers are now seen as a source of insight because they get to see what works at the front line.”

Retailer Boots also piloted a new way of learning to great effect. In a project to help raise digital skills across the business, Stephen Evans, design and delivery manager of digital learning channels at Boots, tested his project on 3,500 of the company’s head office staff.

He told delegates that this group of employees were used to “boring compliance e-learning”, which had historically been delivered via PDFs. As a result, he said, there had never been much uptake for it.

“We wanted to win hearts and minds and get employees interested in digital. They were bored of e-learning and we needed to build some buzz around learning, which is why we decided to gamify the learning experience,” he said.

Boots created an online game environment in which employees learn about a whole range of digital skills. A key part of this is a leaderboard. As employees took the course, they would gain points that would move them up the ranks.

During the pilot stage, 32% of employees took the course, which Evans said was unheard of for any piece of e-learning at Boots. Furthermore, 25% of employees played the game more than once, thanks to a sense of competition between teams.

Not only was the programme successful, but it marked a step change in how Boots’ L&D team works, and the team now uses points in other e-learning projects, according to Evans.

Learning content provider Skillsoft takes a different approach to innovation. The company has 20 million users worldwide and 60,000 pieces of content on its system. It estimates that it has seen one trillion user content interactions.

John Ambrose, vice-president of strategy and corporate development, told delegates at the World of Learning 2014 that the company is using “big data” analytics to help personalise this learning content. Working with researchers at IBM, it is creating algorithms to help personalise content for individual users. It is a bit like the Amazon recommendation engine – over time, users will be recommended resources based on other people like them.

Ambrose said that with so many customers it would be impossible for the company to provide content for individuals based on their need. Big data gets around this, helping deliver the right content at the right time. For employees who feel overwhelmed by information, this could represent a huge improvement.

“We looked at how to motivate people who are already overwhelmed. Data is a part of the answer for the overwhelmed employee,” added Ambrose.

Geoff McDonald, former global vice-president of HR at Unilever, said the company would not have innovated without a clear purpose. He told delegates that the company’s goal of making sustainable living commonplace throughout the world had led to the development of products such as dry shampoo and its Purit product, which purifies water without the need for electricity.

He urged L&D professionals to be clear on organisational purpose and to align all activities with that, saying: “Purposeful individuals are happy and more productive. L&D needs to look at how organisations can create jobs that are purposeful.”

That is not without its challenges, however. The next generation of employees will have vastly different expectations of how they work and how they learn while at work, according to David Cavallo, research scientist and director of the future of learning group at the Massachusetts Institute of Technology.

Cavallo told delegates that the future workforce will be doing project-based work, they will not be intimidated by technology and will be bored by sitting around listening to information being pushed at them.

“The biggest challenge is that kids know more than us. The world is changing fast and technology opens up possibilities for learning,” he said.

But being smart is not about having the answer, it is about being concerned with how to find the answer. Trainers will need to help people do this, to create a new environment to make innovation and ideas emerge.

He concluded: “The challenge for organisations is how to engage the next generations of workers who are used to learning through doing and using technology.”