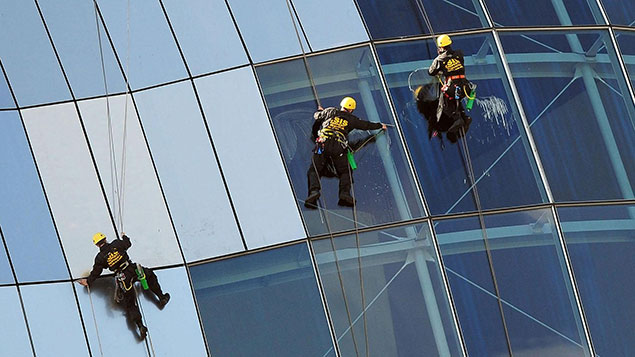 Window cleaners at the Sage Centre in Gateshead. But London and south-east will see most job growth, the report says
Owen Humphreys/PA Archive/PA Images

More than half of the UK’s future job growth will be in London and the south-east, according to a report by the UK2070 Commission.

Lord Bob Kerslake, former head of the civil service and chair of the committee, has urged the government to address the north-south employment divide by setting up a “national renewal fund” similar to that in Germany.

If the imbalance is not addressed, the report claims, housing will become unaffordable in all parts of the country, while a growing population will put pressure on transport, as will increasingly long commutes. London has a 50% higher level of productivity than any other nation or region in the UK, while the productivity gap between London and other regions costs the economy around £40 billion, it said.

It stated: “Today, ‘moving south’ is no longer an option for most people, with areas of growth like London increasingly constrained by the cost and availability of housing.

“For ordinary people and their families, the ‘streets of London are not paved with gold’; increasingly they cannot afford to live there. Rents and house prices are simply too high, while overcrowding and excessive commuting distances are imposing further costs and strain on individuals and their families.”

Rebalancing the economy through investment would still see substantial growth of between 2.4 million and 4.3 million jobs in London and its wider region, but could lead to job growth doubling elsewhere, the report suggested.

Germany has invested €1.5 trillion in its ‘Aufbau Ost’ scheme, helping to regenerate the east of the country after reunification in 1989. Lord Kerslake said: “From an extraordinarily big gap between East and West Germany, they seem to have made serious efforts and progress on taking two countries and turning them into one.”

“Here it feels like we started with one country and are turning it into many. In the UK we have gone in the other direction and it feels as though we are becoming more fragmented, both economically and socially, than it was when I started my career.”

A similar scheme in the UK would need an investment of around £250 billion over 25 years, the report said.

The Commission’s report also called for more effective devolution to empower both existing and new strategic bodies in the regions and for these organisations to harness technological change through local hubs.

A “Plan for England” could enhance the quality of life and scale of renewal in growing and struggling communities, as well as support citizens to navigate disruption brought by global technological and environmental changes, it added.

The commission began its work in July 2018 and will run until January 2020.