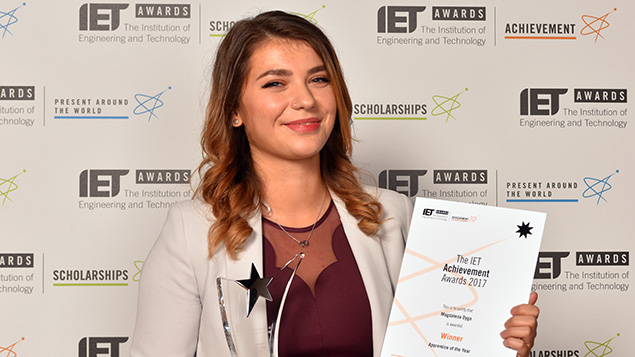 Magdalena Dyga with her IET Apprentice of the Year award

Apprenticeships seem a convenient response to skills shortages in a number of UK industries. But as we celebrate National Apprenticeship Week, award-winning apprentice Magdalena Dyga says policy-makers and employers need to do more to show the value of this career route if they really want it to gain traction.

Anyone working or involved in the UK engineering industry is aware of the current skills shortages in the sector.

The latest survey by the Institution of Engineering and Technology on skills and demand in industry shows that the skills challenge remains a big concern for employers, with almost half of them saying they struggle to recruit people with the right skills.

Yet despite many campaigns to inspire the next generation of engineers, and enthuse young people about the exciting and rewarding career opportunities that studying science, technology, engineering and maths (STEM) present, there remains a worry among employers that young people do not have the right practical skills for careers in engineering.

And by this they mean qualifications and experience as much as “personal skills” like attitude and motivation.

The answer seems obvious to me: increasing opportunities for more people to follow a work-based route into engineering will help employers build the specific skills, experience and knowledge they’re looking for and address the lack of ‘work readiness’ among school leavers.

Apprenticeships have the potential to make up the shortfall of new talent employers are calling out for.

In my experience, schools continue to promote sixth form and higher education but fail to inspire pupils to consider vocational paths into a career”

However, I believe there is a disconnect and a lack of communication between employers and schools – employers blame school leavers and graduates for not being work-ready while those in education don’t have enough information about the vocational opportunities available to them.

The challenge is to show young people who want an interesting and rewarding career that engineering apprenticeships are just as valid as any other route into the sector and a great way to kick start your career at a young age.

In my experience, schools continue to promote sixth form and higher education but fail to inspire pupils to consider vocational paths into a career.

None of the schools I went to promoted apprenticeships as an alternative to university or A-levels even though in many cases they can provide more valuable and relevant experience than higher education.

I had no idea what options were available to me until I chose to inform myself – I had already started a degree by that point but knew immediately that the university route wasn’t for me. I wanted to know how to apply what I was learning in the real world, and so the combination of on-the-job experience, study and financial support provided by an apprenticeship was appealing to me.

Treated as an equal

As an apprentice at Rolls Royce I was exposed to a huge variety of tasks and responsibilities. Every three to four months I would move into another area of the business to gain a better understanding of the different departments.

You can be given a lot of responsibility as an apprentice if you are willing to own tasks. I was expecting that most of my jobs would be side tasks that contributed to the bigger picture; however, I was always treated as an equal and given opportunities to contribute to and manage big projects.

Last November, I was honoured to be named Apprentice of the Year 2017 by the Institution of Engineering and Technology in recognition of my work at Rolls Royce.

Even as an apprentice, I led several key projects and was a pivotal member of the team that achieved a 50% cycle time reduction and annual £160,000 cost saving in electron beam welding, a project that went on to win the company’s 2016 Lean Award.

It’s great to see that bodies such as the IET are committed to encouraging more young people into apprenticeships by celebrating their talent and achievements through awards like these.

The IET also runs an engineering bursary scheme, sponsored by engineering employers, which is designed to support talented individuals facing personal obstacles or financial hardship to complete their training as an apprentice with a package of financial support and membership of the IET.

This sort of support from both industry and employers is invaluable. In return, I believe it is my duty to be an active STEM ambassador and represent my company in this way.

I talk in schools about the different routes into engineering and I have taken part in several open evenings for the Rolls Royce Learning and Development Centre, as well as promoted apprenticeships at a Big Bang Fair.

I hope the Government reviews the apprenticeship levy now that it is a year old and that it shakes up employers in our sector to recognise the value of apprenticeships.

The more we can point out the positive impact that they can have on individuals who want an interesting and challenging career, as well as employers, the easier it will be to attract future apprentices and to show this route into industry is just as valid as any other.