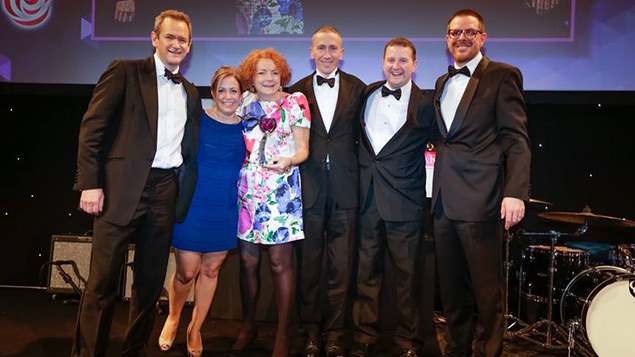 Elior collect their 2013 Personnel Today Award for Learning and Development.

At contract catering company Elior, delivering any kind of learning and development has its challenges. The company operates across around 650 sites and employs more than 10,000 employees in teams ranging from hundreds to just one chef plus two staff.

When Tim Hammond took over as Elior’s chief executive in 2011, there was low recognition of the company’s brand, and contract retention rates had fallen. In a bid to turn this around, it introduced the “eXperience” programme, designed to encourage staff to offer the best possible customer experience.

The programme was so successful that it earned the Award for Excellence in Learning and Development at the Personnel Today Awards in 2013. Elior has also become the first contract catering company to rank in the Sunday Times Best Big 25 Companies to work for.

“We wanted to recognise what was good already, and give staff a framework in which to say ‘that’s an Elior standard’. We wanted to get people into the habit of talking about service and sharing best practice,” explains Michele Moore, Elior’s head of people development.

It was crucial to tailor the eXperience programme around the business and how staff worked, so it was deliberately modular, with bite-size sessions focusing on one small thing at a time, such as how to greet someone or offer an additional item. The materials were simple and visual, consisting of prompt cards and short games.

Elior chose “service champions” that were known for exceptional service to lead the sessions, after providing them with some training in facilitation. “We designed the material specifically so that the service champion runs the session sitting down, so it feels more like a conversation than a seminar,” says Moore.

The results have been impressive. Customer experience scores have increased to 79.5% – 4.5% above target – and 87.1% of customers say they would recommend it. Contract retention rates have climbed to 97.5%, smashing the 95% target set by the company’s chief executive. The number of colleagues choosing to leave the company remains below 20%.

“The project has been great for engaging staff with Elior as a brand, but it also means that when the contracts up for renewal, they’re rooting for us,” says Moore.

The company is now building on this success with the “Leading eXperience” programme, designed to help managers share best practice in service leadership so they can get that all-important discretionary effort from their teams.

“We’re conscious that today’s ‘exceptional’ will be tomorrow’s ‘satisfactory’, become simply what’s expected, so we need to keep ahead of that. It requires a level of engagement and empowerment for them to go out of their way to please a customer,” says Moore.

The judges praised Elior for a “clear solution involving interactivity and longevity”, and the company is taking this a step further with its latest initiative.