E-cigarettes at work: what do the experts say?

By Deborah Arnott on 27 Nov 2014 in E-cigarettes, Smoking in the workplace 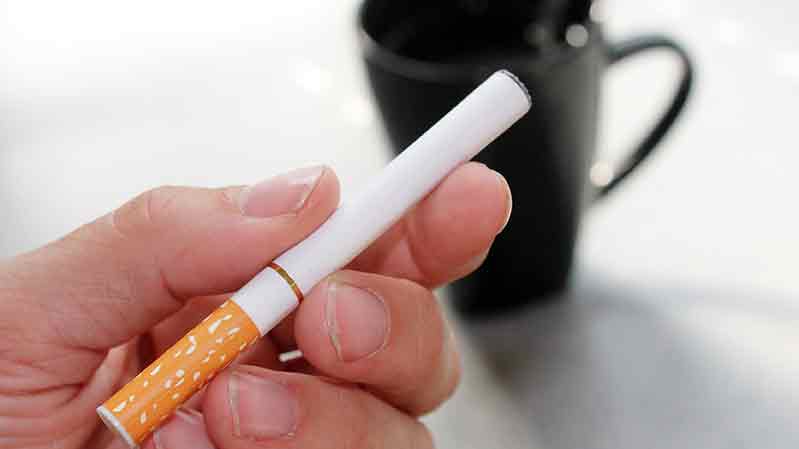 Should employers allow the use of electronic cigarettes at work? Deborah Arnott, chief executive of public health charity Action on Smoking and Health (ASH) looks at the evidence, and a range of other experts give their advice.

The increasing use of e-cigarettes in the UK presents some tricky questions for those trying to reduce the harm caused by smoking. Rather than adopt policies based on emotion or ideology, it is important to start with the facts when considering what to do about policies on e-cigarettes.

Surveys by ASH show that adult users commonly report that they have used e-cigarettes to help them cut down or stop smoking or to remain smoke free. There is little or no evidence to support the fear that e-cigarettes might work as a “gateway” to smoking, rather they appear to be, if anything, a “gateway” to quitting.

Second, e-cigarettes are far less harmful to health than cigarettes. They commonly work by heating nicotine, and users then inhale the resulting vapour. There is no smoke. It is often said that people “smoke for the nicotine, but die from the tar”. Therefore, if a large number of smokers convert to e-cigarettes there will be a big net gain for public health. There is also no reliable evidence of any danger to non-users from second-hand inhalation of vapour.

Third, nicotine is addictive. No such drug should be commonly available without appropriate regulation, if for no other reason than because an addicted consumer cannot be said to be exercising a truly free and unforced choice. Therefore, a simplistic attitude of “leave it to the market” is not an adequate policy response.

FAQ: Should employers allow employees to use e-cigarettes in the workplace?

E-cigarettes should be regulated in a way that encourages their appropriate use by smokers, as one of a number of nicotine-containing products that offer an alternative to smoking. Their advertising and marketing should not be targeted at children or young people who do not smoke.

ASH strongly supports the approach of the Medicines and Healthcare products Regulatory Authority (MHRA), which is to encourage the manufacturers of e-cigarettes to voluntarily license their products as medicines. This would also allow the manufacturers to make appropriate health claims, for example that e-cigarettes are an aid to stopping smoking. It would reduce VAT payable to 5%, and it would help the regulators of advertising to ensure that they are presented to the public in an appropriate way. It would also allow them to be provided on prescription to anyone seeking support through stop-smoking services.

E-cigarettes that are not licensed as medicines will be covered by the revised European Union Tobacco Products Directive. This will set tight limits on strength, require safety mechanisms and appropriate warnings and will prevent cross-border advertising or promotion of such products from 2016.

A World Health Organisation (WHO) report published in August 2014 recommends that governments should introduce laws requesting users do not use electronic cigarettes indoors until evidence shows they are not harmful to bystanders.
The report, Electronic Delivery Nicotine Systems, states: “Since the reasonable expectation of bystanders is not a diminished risk in comparison to exposure to second-hand smoke but no risk increase from any product in the air they breathe, ENDS users should be legally requested not to use ENDS indoors, especially where smoking is banned until exhaled vapour is proven to be not harmful to bystanders and reasonable evidence exists that smoke-free policy enforcement is not undermined.
The WHO report also expressed “grave concern” about powerful tobacco companies dominating the e-cigarette industry and use the products to encourage young people to take up smoking.

The arrival of these products on the market raises questions for employers, particularly local authorities who are public health providers. As products become licensed as medicines, local authorities will need to consider the information that they provide to the public, whether they will provide them on prescription and what their relationship (or otherwise) might be to products licensed as medicines but owned by the tobacco industry. They will also need to consider what their position is in relation to service users and the public.

Employers in general need to think about their policy on e-cigarettes and how they will allow staff to use them. There remains much to be learnt about e-cigarettes but with two million users and counting, it is an issue that cannot be ignored.

See the briefing paper Will you permit or prohibit e-cigarette use on your premises – five questions to ask before you decide for more information on this subject.

What the experts say

One of the dilemmas of the e-cigarette phenomenon is how they are used in public. Local authorities, with their vast range of workplaces, service users and public spaces, face some particular challenges. Below, experts discuss some of these issues.

“There is currently little guidance for employers to help manage the use of e-cigarettes in the workplace, therefore they need to consider their own approach.

“Employees will be trying to give up smoking, some using e-cigarettes, some not. In the future some products will be classified as a medicine. Some employees may have concerns about the harm of e-cigarettes. Employers have a responsibility to all of these groups and will need to draft a policy applicable to their organisation.

“Policies are needed to ensure that employees know when and where they can use e-cigarettes. Employment tribunals will consider what is reasonable; with the lack of current definitive guidance it is likely they would deem both policies that exclude and permit e-cigarette use to be reasonable. For this reason, employers really need to consider what their workplace requirements are, who their employees are and what their public persona should be. A middle road is for e-cigarettes to be permitted but in a designated area away from smokers.

“The best advice for employers at this stage is that as long as your policy is clear, imposed in a non-discriminatory way and does not breach any contractual agreement then a tribunal would be likely to uphold that procedure.”

“E-cigarettes are clearly in use by many people as a harm-reduction strategy to avoid the effects of smoking.

“The evidence on comparative harms of e-cigarettes still lags behind a significant growth in use. Many users feel the risks from e-cigarettes are either non-existent or so small that benefits outweigh risks. Indeed, the consensus of research does seem to be heading in this direction.

“For some, it follows logically that if we recognise that e-cigarettes are part of reducing harm from tobacco we should not treat them differently. Consequently, we should develop policies which are based on what they do (deliver nicotine) not what they do not do (deliver harmful tobacco smoke). This, they suggest, will help de-normalise smoking and normalise non-tobacco products.

“Others feel we need to have the same restrictions on use as for cigarettes while we await a developing consensus.

“In Hertfordshire we are working to address these questions so we can develop a clear and fair policy that supports those who want to use e-cigarettes and respects those who do not.”

“Despite its name, an e-cigarette is not a ‘cigarette’ and using one is not ‘smoking’. Therefore, the UK smoke-free legislation does not apply to them. There are concerns that their appearance and use could undermine our high levels of compliance with smoke-free policies.

“The fact is that burning tobacco produces a distinctive and pervasive smell as well as deposits of ash. Attempts to pass off smoking as using an e-cigarette would be easily detected by a diligent investigator.

“There are also concerns about safety. Some of the charging units can cause overheating of batteries and be the source of fires. Responsible employers will already have in place a general prohibition on the use in the workplace of unapproved electrical chargers for all personal appliances.

2 Responses to E-cigarettes at work: what do the experts say?