By Rob Moss on 10 Sep 2015 in Employment tribunals 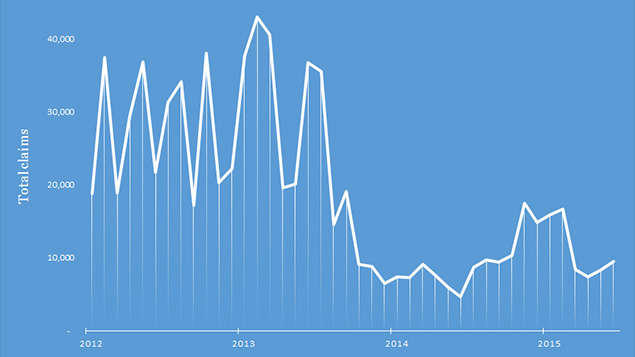 The number of employment tribunal claims in 2015 continues to be significantly lower than before tribunal fees were introduced, according to statistics released today by the Ministry of Justice.

In June, the Government announced a review of tribunal fees, expected later this year, and last month, Unison lost its third bid for a judicial review of fees, arguing that a sharp decline in the number of cases being brought to tribunal is due to claimants now having to pay up to £1,200, depending on the type of claim brought.

The employment tribunal claim statistics show that the number of sex discrimination claims in the three months to June 2015 were 814, down 87% on the same period in 2013.

Laura Merrylees, employment law editor at XpertHR, said: “The fact that the number of claims being issued remains dramatically lower than prior to the introduction of the fee regime comes as no surprise.

“The odd spike in the number of certain types of claim, such as unlawful deduction of wages, may be explained by recent litigation around holiday pay. Whether the landscape might change following the outcome of the Government’s current review of tribunal fees remains to be seen.”

Official figures were also released for the number of tribunal fees paid in the first quarter of 2015. A total of 5,412 fees were requested by the courts, of which 3,686 fees were paid. There were 2,255 remission applications, of which 1,145 (51%) were awarded, either fully or partially.