For the first time a Wall Street bank is to be led by a woman as Citigroup has named Scotland-born Jane Fraser as its new chief executive.

Fraser is the bank’s current president and head of global consumer division, and will become its new boss in February when current chief Michael Corbat retires.

She has worked at Citi, the US’s fourth largest bank, for 16 years, serving in her current role since 2019. She oversees business in 19 countries and previously led its Latin America division.

The chair of Citi’s board of directors, John Dugan, said Fraser would take the bank “to the next level”.

“She has deep experience across our lines of business and regions and we are highly confident in her,” he said.

Last year, Royal Bank of Scotland named Alison Rose as its first female chief executive, making her the first woman to run any of the big four banks in the UK.

Just 31 women held top spots at major American companies listed on the S&P 500 index at the end of 2019, none of which were banks. As a result, calls for more diversity have intensified particular as evidence grows suggesting that more inclusion leads to better business performance.

At a congressional hearing last year Rep Al Green (the Democrat representative for Texas’s ninth congressional district) asked the chief executives of the US’s seven largest banks to raise their hands if they were not “white men.” After none raised a hand, Green asked if any of them believed they would be succeeded by a woman or a person of colour.

None of the executives “appears to believe that your successor will be a female or a person of colour,” he said after no hands were raised. 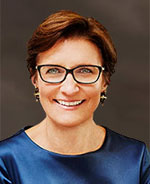 Fraser will take charge of the bank as it battles to mitigate the effects of the Covid-19 crisis: in the most recent quarter, Citi’s profits fell by 73% as it set aside more than $7bn to cover potential losses.

She was born in St Andrews, Scotland, and has degrees from Harvard Business School and Cambridge University. Now 53, married and with two children, she started her career at Goldman Sachs in London, joining Citi after rising to be a partner at consulting giant McKinsey.

On a Citi blog page on leadership, Fraser said that “one of the biggest challenges has been my sense of doubt. I always feel unless I’m 120 percent qualified for a new opportunity or challenge, that I shouldn’t really be taking it on, and I’ve had a lot of mentors that have helped push me into taking them, and now I try to turn that doubt into a power of doubt, to make sure I’ve got a great team around that is more qualified than I am, to help tackle the opportunities and sometimes just to work harder and be that motivator to go the extra mile.”

In 2018 she told CNN: “There aren’t that many women around, and so a lot of the women want you to succeed, and they want to help you succeed in the organisation.

“I look forward to seeing a woman being the first CEO of a Wall Street firm whoever that may be. I’ve never had the ambition to be the CEO of Citi or any other organisation.” But she added: “Things can change over time.”

Pay transparency: How organisations can break the taboo