By Claire Scullin on 2 Dec 2015 in PT Awards, The HR profession 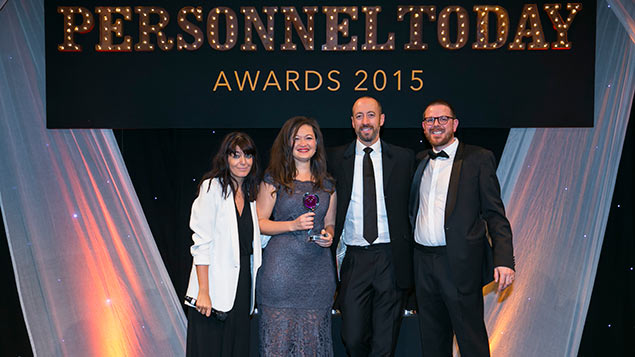 Stephanie Greenland was awarded the HR Newcomer of the year award, sponsored by Michael Page Human Resources, at the 2015 Personnel Today Awards ceremony on Monday night. Here we profile her winning entry, and those of the runners-up.

Sodexo UK and Ireland employs 34,000 people and delivers services that improve the quality of life to clients at 2,000 locations in the corporate, healthcare, education, leisure, justice and defence sectors. With an annual turnover of more than £1 billion, Sodexo delivers a range of services from catering, cleaning and reception, to asset management, security, laboratory and grounds maintenance services.

Sodexo’s strategic goals include being a leading competitor in the sectors in which it operates, improving operating margins by 1.5% and achieving a 50% employee engagement rate by 2015. Having employees working on around 2,000 client sites over a wide geographical area creates significant communications and engagement challenges.
Over the last five years, the company has grown and diversified substantially, creating a need for more collaborative and business-centred HR support services that could evolve and add value to the way in which HR serves the business.

“Stephanie is hardworking with high standards and attention to detail, as well as the ability to ‘join the dots’ in very complex activities and pragmatically deliver what the customer both internally and externally needs.”

The BBC is the world’s leading public-service broadcaster. Established by a Royal Charter, it is a public-service broadcaster funded by the licence fee paid by UK households. It uses the income from the licence fee to provide services including 10 national TV channels plus regional programming, 10 national radio stations, 40 local radio stations and an extensive website.

Samina (Sam) has been specifically nominated for this award not only for providing outstanding customer service and improving engagement, but for doing this alongside her professional development work and passion for HR.

“[Samina] has a true passion for HR, people and a genuine interest in making the service a success. She has particular strengths in relationship building, knowledge transfer and engagement.”

*at the time of entry, Samina worked for Serco.

Merlin Entertainments is the largest entertainments company operating in Europe. It runs 110 attractions in 23 countries across four continents.

Merlin has grown rapidly since Melanie (Mel) joined, from 77 attractions to over 100 in 23 countries. Mel joined the newly created Group Talent & Development team with the challenge to design and implement structured development programmes linked to Merlin’s competencies that were professional and consistent across the group. It also launched its diversity strategy in 2012 with clear outcomes and objectives. Although initially headed up by our Group HR Director, Mel took the lead in June 2014 as it became clear that more time and focus was needed.

“Mel’s approachable and professional manner enabled her to build strong relationships with the HR community and external suppliers, which greatly contributed to the success of the training programs.”

Doncaster and Bassetlaw Hospitals NHS Foundation Trust (DBH) is a successful and growing organisation with big ambitions. It is responsible for three local hospitals and wider community services for a local population of around 420,000 people and its 6,500 employees range from highly specialist clinical staff to administrators and vital support teams.

The trust recognised that it had issues with: high executive turnover, leaving a lack of direction and purpose; operational silos when providing patient care; and inefficient, mainly paper-based, systems. Once a new executive team was put in place in 2013, it identified where root and branch reforms of process and behaviour were needed. At the same time, HR made structural changes, disbanding their own silos from a former medical staffing team, to an integrated HR function dealing with all people matters irrespective of banding or profession.

“Maxine organised and supported a number of senior recruitment and selection exercises, dealing with confidential and sensitive data with care and discretion.”

Cafcass was set up under the provisions of the Criminal Justice and Court Services Act, which brought together the family court services previously provided by the Family Court Welfare Service, the Guardian ad Litem Service and the Children’s Division of the Official Solicitor’s Office. It is a non-departmental public body and works within the strategic objectives agreed by its sponsor department and contributes to wider government objectives relating to children. It is the largest employer of social workers in England.

Social workers face day-to-day challenges and demands, and it can be a difficult task for HR professionals to have the confidence to enable staff to talk freely and openly to them, while at the same time representing the organisation’s interests. New lifestyle wellbeing sessions were being perceived as a “fad”, so Kathryn had to find a way to overcome this.

“Kathryn has the ability to understand the pressures of front-line service delivery, yet remain positive and energised. She is calm and tactful and able to build rapport with people. She is truly passionate about what she does and shows great enthusiasm and positivity.”

Wales Audit Office (WAO) works to support the Auditor General as the public-sector watchdog for Wales. Its aim is to ensure that the people of Wales know whether or not public money is being managed wisely and that public bodies in Wales understand how to improve outcomes.

Long-standing issues with existing systems and processes identified in a number of staff surveys were hampering the Wales Audit Office’s ability to reach its full potential as a well-run organisation. Solving these issues meant a complete systems change, introducing a brand new way of working. This project was unprecedented in its scale and had to be done to a very tight timescale of 12 months from start to completion. With a disparate and mobile workforce of around 260 people scattered across the length and breadth of Wales, implementation was a challenge.

“Glyn was a critical member of the implementation team with particular skills in system development, but he also demonstrated excellent communication skills, capability in project management, an effective approach to team working and motivation and strong influencing skills. He made the project a success.”