During the coronavirus pandemic, almost half of working adults were working from home at times but it is now slowly becoming more apparent the degree to which people are returning to their usual place of work

Asked about their plans in February 2022, more than eight in 10 workers who had to work from home during the pandemic said they planned to work partly from home and partly in the workplace – hybrid working.

The proportion of workers hybrid working has almost doubled from 13% in early February 2022 to 24% in May 2022, while the share exclusively working from home has fallen from 22% to 14%.

The hybrid working trends data from the ONS shows that while the proportion of workers who planned to hybrid work at all has not changed much since April 2021, that hybrid working pattern now favours spending most working hours at home.

In February 2022, the most of those opting for hybrid working planned to work mostly from home, and sometimes from their usual place of work. More than four in 10 (42%) reported this, an increase from 30% in April 2021.

Before the coronavirus pandemic, one in eight working adults reported working from home in the week prior to interview (12%). However, this is from a separate survey not directly comparable with more recent figures.

Around one in seven working adults (14%) worked from home exclusively between 27 April and 8 May 2022, while nearly a quarter (24%) opted for hybrid working. Travelling to work exclusively has been the most common (46%) working pattern since national restrictions were lifted. 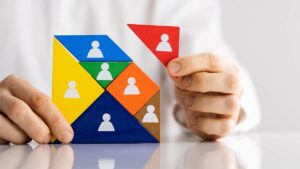 Andrew Mawson, managing director of global consultancy Advanced Workplace Associates, said: “The ONS data shows what we have found through our detailed analysis of how our clients work throughout the world – that the vast majority of people want to work from home for part or most of the week, and that 60% of the work people do in offices is on their own without the need for interaction with their colleagues.

“Forward-looking businesses are seeing the benefits of hybrid working – it is only those stuck in the old command-and-control mindset that want everyone back in the office.”

Asked why they were working from home in some capacity, the most common reason was that it was part of their normal routine (62%), suggesting they had adopted homeworking long-term, although some may have already done so pre-pandemic.

Higher earners are more likely to work hybrid or exclusively from home. More than a third (38%) of workers earning £40,000 or more ‘hybrid worked’ at the end of April.

Earners who reported hybrid working between 27 April and 8 May 2022 included:

Adapt culture to hybrid work: do not force a return to offices

Workers aged 30 to 49 years were the most likely to report hybrid working, with 29% reporting doing so.

More than three-quarters (78%) of those who worked from home in some capacity said it improved their work-life balance. Half said it was quicker to complete work (52%), they had fewer distractions (53%) and that it improved their wellbeing (47%).

Workers aged 16 to 29 years were less likely than those aged 30 years and over to report experiencing fewer distractions when homeworking.

Julia Kermode, founder at Nantwich-based IWork, said: “It’s about time all the out-of-touch dinosaurs woke up and smelt the coffee. Hybrid working is here and it’s here to stay. For many people hybrid working is not a luxury, but actually necessary for them to be able to work.

“Think people with disabilities who can’t travel into an office easily, people juggling caring responsibilities, people juggling multiple jobs to create an income. No-one wants to be out of work and hybrid working gives people that opportunity who otherwise might not be able to. It is definitely not about faffing around and eating cheese as suggested by the Prime Minister.”

The ONS data also showed that the proportion of businesses reporting using or planning to use homeworking as a permanent business model increased from 16% in autumn 2020 to 23% in early April 2022.

More than half (54%) of businesses in the information and communication sector said they were using, or intended to use, increased homeworking as part of a permanent business model in early April 2022. Predictably, this was only the case for 3% of businesses in accommodation and food services, and 5% in construction.

No-one wants to be out of work and hybrid working gives people that opportunity who otherwise might not be able to. It is definitely not about faffing around and eating cheese as suggested by the Prime Minister” – Julia Kermode, IWork

The most common reason for using or planning to use homeworking as part of a permanent business model (among businesses who reported this) was improved staff wellbeing (60%), followed by reduced overheads (43%) and increased productivity (41%).

Sandra Wilson, director of Ipswich-based recruitment and HR firm Cottrell Moore, said: “Hybrid working has been around for many years in lots of roles and I’m sure it will remain for those continuing to hit their organisations’ expectations. For many companies, though, it just isn’t viable.

“It will be interesting to see what happens over the next 18 months. We have an economy that is walking a tight rope so employees may no longer be able to demand anything. I think most, in the not too distant future, will simply be grateful to have a job sadly.”

But Kieran Boyle, managing director of Gloucester-based CKB Recruitment, disagreed: “Hybrid working is 1000% here to stay. It’s one of the main things candidates are looking for when they move jobs, and given the candidate-starved UK jobs market, employers have had to accept it if they want to continue to attract the best talent. We don’t envisage this changing now as a large number of our clients now have this model set it stone. It seems most people now want a mix of home and office working, and this is unlikely to change.”

Asked about the data on hybrid working trends from the ONS, BrightHR chief executive Alan Price said: “Many employers are keen to embrace remote or hybrid working to afford their staff a better work-life balance whilst saving on costly office space expenses. Similarly, employees are reducing their outgoings on commuting and appreciating having employers who support their lifestyles and personal circumstances.”

Business leaders urged to prioritise wellbeing as we...

Give wellbeing a board seat: Prof Sir Cary...

Working from home has damaged sense of belonging,...

The outdated views of the anti-hybrid working brigade

Workers in London say they enjoy the office...

Authenticity at work: Is it really ‘all about...

Hybrid working: How did we get to where...