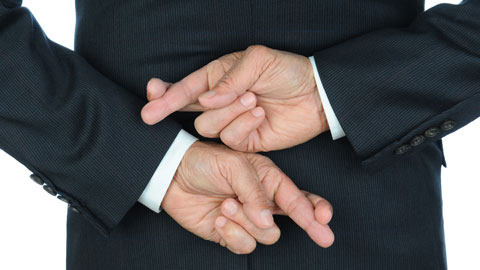 Three managers in five (63%) have been expected to behave unethically at some point in their career, according to research published today by the Institute of Leadership and Management (ILM) and Business in the Community (BITC).

According to the findings, almost one respondent in 10 (9%) said they had been asked to break the law at work, and one in 10 also said they have left jobs as a result of being asked to do something at work that made them feel uncomfortable.

These findings come despite 77% of respondents saying they felt there had been an increase in public expectation for organisations to operate more ethically.

The survey, of more than 1,000 UK managers from the private and public sectors, found 93% of respondents’ organisation had a values statement. However, 43% of respondents said they had been pressured to behave in direct violation of it, with 12% of managers saying the correlation between employee behaviour and company values was not at all close in their organisation.

In addition, more than a quarter (27%) of respondents said they were concerned their career would suffer if they were to report an ethical breach, with whistleblowing fears higher amongst more junior managers (17% of whom were certain of experiencing negative consequences) than directors (9%).

Charles Elvin, chief executive of the ILM, said: “Business ethics have come under increased public scrutiny in recent years, but our research highlights just how many people are still facing ethical conflicts at work.

“As well as damaging a company’s reputation, we see that ethical failings can have a negative impact on employee happiness, loyalty and trust in their organisation.

“Not all ethical decisions will be black and white, but an explicit and consistent set of values that are embedded within the organisation and reflected across all of its actions – from strategic decisions down to day-to-day activities – will lay the foundations for ethical behaviour. Leaders and managers, including those at more junior levels, have a crucial role to play in communicating their organisation’s values and should be given the support they need to enable cultural change.”

Stephen Howard, chief executive of Business in the Community, added: “Cultural change is not something that can be instilled in organisations overnight, but this research indicates where some of the key pressure points lie. The importance of junior and middle managers in setting an organisation’s ethical tone cannot be overestimated – they often feel squeezed and are sceptical about how well corporate values map to their own, are relevant to their work or are demonstrated by their colleagues.

“Responsible leaders must make sure the managers throughout their organisation are involved in the creation of values and understand how those values apply to their day-to-day work. Otherwise, they cannot be sure the values as written are the ones that are lived, exposing their organisation to potential ethical breaches and reputational risk.”

Do ethics pay? Visit XpertHR to find out.

See XpertHR’s discussion on whether corporate ethics are a “nice to have” or a business essential.