A dispute over night shifts has left thousands of commuters unable to reach their offices in London today (26 November) as Tube strikes hit the capital.

A walk out organised by the RMT union shut the Piccadilly line, cutting off Heathrow from central London, and the Waterloo and City line. The central section of the Central line has also been closed, damaging Oxford Street trade.

Other tube lines have been also been affected with less frequent services on the Victoria, Jubilee and Northern lines. A normal service was operating on the District and Circle lines, which were not subject to union action.

Transport for London said that by mid-morning it was running about 60% of normal services on the Tube.

The dispute is over the night shifts that drivers will be required to work to enable the restart of the Night Tube. This is due to resume overnight on Saturday night for the first time since the start of the pandemic.

In May the decision was taken to merge the Night Tube workforce of about 200 drivers, all whom worked part-time, with the day Tube staff – meaning that all drivers could be required to work occasional Night Tube shifts.

The RMT says employees’ work-life balance would be wrecked by Tube drivers’ new rotas by “bulldozing through additional night and weekend working”.

But Transport for London says the changes have been agreed by other unions and would result in drivers working about four night shifts a year.

RMT general secretary Mick Lynch said on Thursday: “This strike is about the ripping apart of popular and family friendly agreements that helped make the original Night Tube such a success. Instead the company want to cut costs and lump all drivers into a pool where they can be kicked from pillar to post at the behest of the management.

“We have made every effort in Acas and direct talks since the off to resolve this dispute but it is clear that London Underground bosses are driven solely by the bottom line and have no interest whatsoever in the well-being of their staff or the service to passengers.”

“We warned months ago that slashing 200 Night Tube train driver positions would create a staffing nightmare and LU [London Underground] need to start facing up to that reality and soon. The union remains available for further talks even at this late stage.”

TfL on Thursday called for the RMT to call off the strike and enter talks about the staffing requirements of the Night Tube.

TfL said the RMT hadn’t presented “any workable alternatives” to the roster changes and refused a recent offer to jointly review the Night Tube after a trial period. 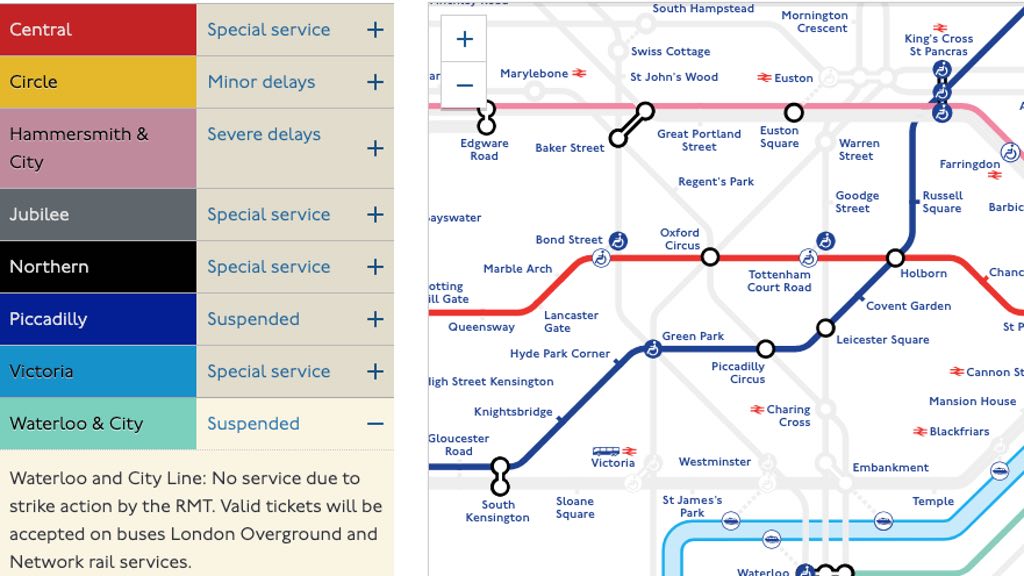 Meanwhile, in further bad news for commuters in London this winter, TfL finance chief Simon Kilonback said the failure to secure government funding for long-term repairs and upgrades would have a disastrous impact on the capital’s transport network.

Last week TfL warned that 18% of bus services and 9% of Tube services could be axed, which would mean removing 100 of 700 bus routes and reducing services on 200 more.

It is thought that either the Bakerloo or Jubilee line could be closed until cash is found.

Kilonback said there was a risk that TfL would have to issue a section 114 notice – effectively declaring itself bankrupt and handing responsibility for services back to the government.

Harrods threatens to use agency staff if strike...

Royal Mail strike: Union urges it to ‘get...

Nurses set to vote on strike over pay

Network Rail pushes ahead with consultation over job...

Workers at the UK’s most important port vote...