Pay in IT: How age affects salary and progress

By Ed Cronin on 22 Sep 2015 in Age discrimination, Salary surveys 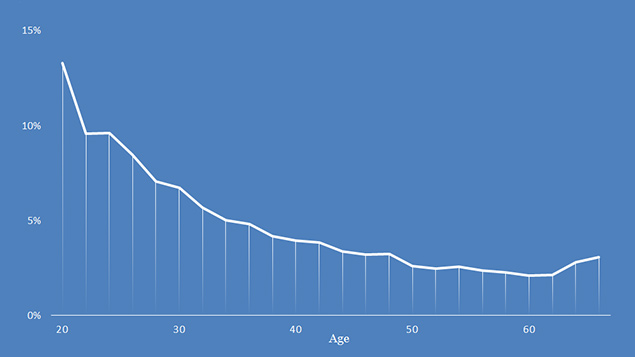 XpertHR Salary Surveys: Pay in IT

IT Staff in Computer Services and Hi Tech Companies Report

IT Staff in Finance Companies Report

Data on 40,000 individual IT staff in the survey shows that both pay increases and promotions peak at the start of people’s careers as they become proficient in their job and move steadily up the organisational ladder.

For younger employees average annual pay increases can exceed 10%, but increases in pay in IT then falls gently to a low of 3% for those aged 60 (see chart 1, above).

Chart 2. Promotions become substantially less common past the age of 30.

Perhaps more unexpectedly, the data also reveals that performance ratings handed out in annual appraisals also tail off for IT professionals over the age of 40 (see chart 3).

Chart 3. Top performance ratings tail off for those aged over 40.

Age catches up with all of us, even when it comes to reward. If you are an older employee in the information technology sector then then the above analysis represents mixed news – do top performance ratings for older employees outside of senior management really need to be so infrequent? Overall, however, the picture painted by our final set of data is positive.

The analysis is based on anonymised individual data supplied by employers for XpertHR’s June 2015 Computer Staff Salary Survey. In all, 195 employers provided data on 67,560 IT professionals, 40,000 of which had compensation history and demographic information.

Data collection for the December 2015 edition of the computer staff survey runs throughout the Autumn with the latest IT pay intelligence released to subscribers before Christmas. Find out more here.