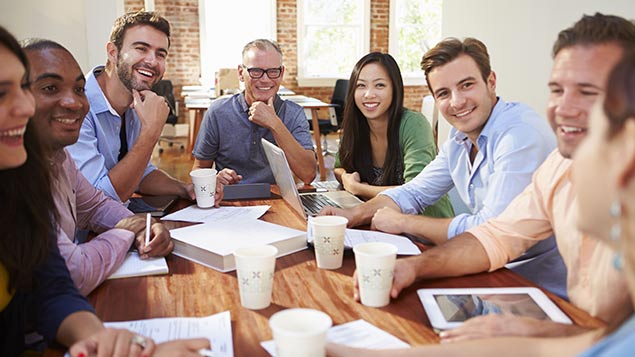 42% of employees felt their peers were the biggest influence on engagement. Photo: Monkey Business Images/REX Shutterstock

Colleagues, rather than managers or HR, have a more positive effect on employee engagement levels at work, according to a study by software company Oracle.

How to increase employee motivation

The Simply Talent study, which polled around 1,500 workers across Europe, found that just 3% of employees think HR has the most impact on employee engagement levels. The majority (42%) felt their peers were the biggest influence, while just over one-fifth (21%) cited line managers, and 7% unit managers.

But when it comes to negative influences on workplace engagement, many employees blamed their superiors.

Almost one-fifth (19%) said their senior leadership team were the most responsible for negatively impacting engagement, and 11% felt it was down to line managers.

Employees recognise the value of feeling engaged at work, Oracle found. Fifty-nine per cent of respondents in the UK said increased engagement enhances productivity, while 30% of respondents across Europe thought that being engaged could help them provide better customer service.

And despite finding the most satisfaction from working with colleagues, 57% said that more proactive, regular interactions with managers would improve their time at work.

Staff would also like more recognition for their achievements (53% said this should be a management priority), and greater understanding about their contribution to the company (35%).

Loïc Le Guisquet, president for Europe, Middle East and Africa (EMEA) and Asia Pacific regions said: “These findings should be of concern to HR teams as they indicate that HR does not ‘own’ engagement in the eyes of employees.

“If this is the case, then what hope is there that HR can have a positive impact on the working environment and company culture? This study should act as a call-to-arms for HR teams to demonstrate the value they bring to their business and its employees in a way that is clear for all to see.”

The survey also found that only around one-third (35%) of Western European employees say they feel engaged “most of the time”.

Only 29% of employees thought that their company was proactive at engaging with them, compared with 42% who state that their employer typically waits for them to bring up issues. More than half said that managers were either average, poor or very poor at offering regular feedback.

Loïc Le Guisquet added that this was a “great opportunity” for HR to take ownership of engagement within organisations.

“Employees feel engaged by their peers and HR can help encourage this by providing access to sharing and collaboration platforms and social tools. But employee expectations are also changing fast, particularly those of millennials.

“They want recognition and feedback and they want it consistently. HR can deliver this through technologies that provide managers with a more up-to-the minute view of their employees, which in turn encourages a more personalised, rewarding dynamic between them.”