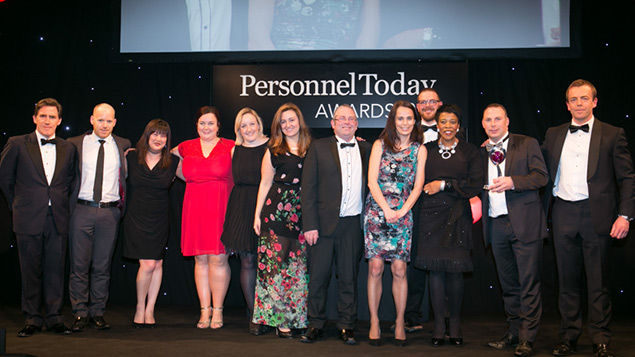 London Overground win HR Team of the Year in 2014.

The HR Team of the Year Award, sponsored by Monster, went to well-deserving winners London Overground Rail Operations. We look at the achievements behind their winning entry and profile the rest of the shortlist.

About the organisation
London Overground Rail Operations Limited (LOROL) operates London Overground rail services on behalf of Transport for London (TfL). Each member of the 14-strong team takes responsibility for key projects alongside their day-to-day roles.

The challenge
In July 2013, LOROL received formal notification from TfL that Driver Only Operation (DOO) was to be extended across the entire Overground network. This is where train doors are operated by the driver and, for LOROL, this meant removing conductor grades from the business (affecting 10% of the employee population). DOO was a “red-line” issue for the RMT Union and a highly contentious industrial relations problem.

About the organisation
ATS Euromaster is a nationwide tyre company with 345 centres across the UK. Despite the impact of the economic situation and an unexpected downturn in the truck market, it is currently on track to make a small profit by the end of 2014.

HR Team of the Year – the judges

The challenge
Five years ago, the organisation was charged with reversing a long record of financial instability – at its lowest point the business recorded a loss of £27 million. The appointment of a new HR director was a catalyst not only for the HR function to challenge the status quo, but for the whole organisation to develop a renewed strategic focus.

Judges’ comments
“Business-like focus on the crucial role of line managers and their impact on HR performance – a notable use of initiatives to promote line-management skills.”

About the organisation
Barclays UK Retail and Business Banks are experts in understanding customer needs. They help millions of customers with their finances and employ over 24,000 people. They hire more than 4,000 people per year, and receive more than 85,000 applications over a range of roles, including contact centres, retail branches and head office. The resourcing team has 29 employees alone.

The challenge
A few years ago, a BBC “whistleblower” programme identified legal, risk and compliance issues with Barclays’ hiring process. Branches could not hire the people they needed to and some had to close. Stakeholder feedback was also poor. Barclays’ strategy was clear – to ensure it hired the very best people that supported the banks’ long-term retail strategy and had staff that the business was pleased with. More than that, it wanted to ensure candidates were not only the best at interview, but stayed with the bank longer, had fewer days off and performed better.

Judges’ comments
“Impressive reformation of a poor resourcing service, with industry-leading results, especially on the efficiency and satisfaction of the core recruitment service.”

About the organisation
Biffa Group Ltd is a waste management company headquartered in High Wycombe. It provides collection, landfill, recycling and special waste services to local authorities and industrial and commercial clients across the UK.

The challenge
Since the company’s restructure in 2010, Biffa’s HR team has played a pivotal role in getting the company back on track. HR director Jane Pateman was appointed (where there had previously been noone) and along with CEO Ian Wakelin, she introduced values to the business – a vision, strategy and direction to help turn the company around. They had to start from scratch to convince senior management of the benefits, best practice, and evidence to support the aim of developing a people-centred strategy.

Judges’ comments
“Clearly very significant improvement in the capability of the HR department, with very impressive financial outcomes as a result of this step-change.”

About the organisation
HomeServe plc is a home emergency repairs business. It was created as a joint venture with South Staffordshire Water in 1993, with an investment of £100,000. The home emergency business grew quickly and within 10 years accounted for two-thirds of the company’s profits. In 2004, South Staffordshire Water plc demerged from the Group and the company changed its name to HomeServe plc. The organisation continues to grow in all its markets.

The challenge
The organisation was faced with the largest regulatory fine in British retail financial services history for mis-selling insurance policies between 2005 and 2011. It needed to completely turn the business around by putting the customer at the heart of its thinking. On 31 October 2011, HomeServe Membership Ltd ceased sale of all products to both new and existing customers for a period of time while the company reviewed the product suite and the way in which products were marketed and sold to customers.

Judges’ comments
“Hugely challenging situation from which the HR team had to rebuild and deliver, with excellent results for the business.”

About the organisation
Nationwide is the world’s largest building society and one of the UK’s largest savings and mortgages providers. It also offers current accounts, credit cards, ISAs and personal loans to its 15 million members.

The challenge
Against the backdrop of a challenging cost environment, increasing competition and regulatory scrutiny, the distribution HR business partnering team has worked tirelessly to deliver multiple key initiatives across Nationwide’s distribution channels, which include the branch network, direct sales and intermediary sales, in order to deliver Nationwide’s corporate goal of being the public’s first choice for financial services.

The challenge
The people development team was formed at the end of 2012 by the new people development director with the remit of delivering the V Happy People Plan (VHPP). Previously there had not been a HR strategy and therefore much of what had been done was transactional and disjointed. People engagement was low at 71% and service standards were impacted. With a business objective of growing the business and boosting financial revenue through a strategy of “customer intimacy”, a new approach was needed with employee engagement identified as a key commercial driver.

Judges’ comments
“Really interesting and imaginative approach to motivating and rewarding staff, with excellent results in recruitment and improvements in customer satisfaction – much for other employers to learn from in a practical way.”

About the organisation
Founded by Sir Richard Branson in March 1995, Virgin Money (VM)  is a UK-based bank and financial services company. At the beginning of 2012, it acquired Northern Rock in a deal worth up to £1 billion.

The challenge
When Virgin Money acquired Northern Rock (NR) in 2012, in a deal worth up to £1 billion, it took a big step in its journey to make banking better. Further acquisitions (credit cards from MBNA and mortgages from UKAR) complemented the NR deal. The company has therefore been through a period of integration, while also managing further asset acquisitions and building an overall customer offering and improved customer service. The result has been rapid and complex business change.

Judges’ comments
“Strong application, team have clearly delivered over the last couple of years to help turn business around.”