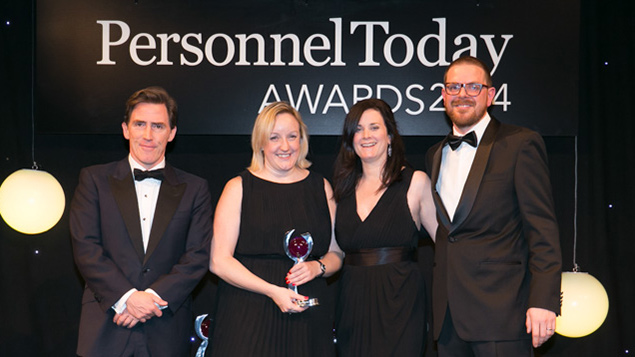 Alison Bell, London Overground Rail Operations, saw off strong competition to take home HR Professional of the Year. We profile the winner of the award, sponsored by Monster, and the others in the shortlist.

About the organisation
LOROL is the train operating company responsible for running the London overground network, under a concession agreement with Transport for London (TfL). Together, their vision is to “develop our railway together, proudly connecting communities around London”.

HR Professional of the Year – the judges

The challenge
In 2013, LOROL was awarded a two-year extension of its contract to run London Overground, but this needed to be done through driver-only operation (DOO), meaning a significant restructure across the business was needed.

About the organisation
Virgin Money is a UK-based bank and financial services company founded by Sir Richard Branson in March 1995. At the beginning of 2012, it acquired Northern Rock in a deal worth up to £1 billion. Its ambition is to make “everyone better off” (EBO).

The challenge
Following the acquisition of Northern Rock in 2012, there has been a period of considerable change and integration at Virgin Money. As employee relations manager, Barry helped to drive this change and embed the bank’s EBO values, at the same time as supporting its growth goals.

“[He] stepped up into a vacancy, led with upskilling HR. I would have liked to see more in the way of specific results and links to business objectives.”

About the organisation
Tesco Bank has transformed from a fledgling start-up on a brownfield site in Newcastle to an established bank with more than 7 million customer accounts and 4,500 employees.

The challenge
With trust in banking at an all-time low, Tesco Bank wanted to reward its customers for their loyalty. It needed its people to behave differently to keep pace with customers and their expectations. L&D needed to be more strategic, and the culture needed to become more collaborative and commercial.

ATS Euromaster is a nationwide tyre company with 345 centres across the UK. It operates a specialist fast-fit and tyre service to fleet and retail customers.

The challenge
Five years ago, ATS Euromaster was charged with reversing a long record of financial instability – at its lowest point the business recorded a loss of £27 million. As group internal communications manager, Jane was tasked with coming up with a communications strategy to help drive a change in the company’s style and culture.

Judges’ comments
“Many in HR would find the challenges daunting, but this was down to earth. Practical ideas backed up with results.”

About the organisation
Sandwell is a metropolitan borough in the West Midlands. It comprises the six towns of Rowley Regis, Oldbury, Smethwick, Tipton, Wednesbury and West Bromwich. Sandwell council is a large council with a workforce of more than 11,000.

The challenge
Like many councils, Sandwell has faced the challenge of improving employee engagement after minimal pay awards and a lack of promotion prospects. Richard has led a number of projects aimed at increasing engagement and productivity, as well as clarifying the council’s culture and values.

Judges’ comments
“Really liked how he developed relations with third party and used an innovative approach with cost solutions. I like how he has translated problems into clear strategy and practical solutions.”

About the organisation
Jaguar Land Rover is the UK’s largest automotive manufacturing business, built around Land Rover, a leading manufacturer of premium all-wheel drive vehicles and Jaguar, one of the world’s premier luxury sports saloon and sports car marques. It is owned by Tata Motors Ltd.

Over the past five years, Jaguar Land Rover has experienced huge domestic and international success, but this placed demands on its recruitment and talent functions to attract, identify and select the best people in a competitive sector. Jon has restructured his team to adapt to the changing needs of the business and towards a business partnering model.