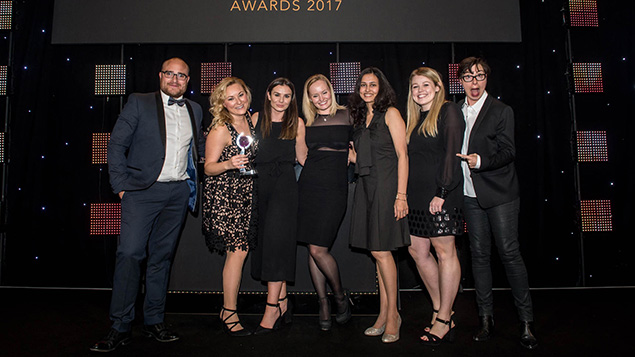 With a benefits package linked to ‘life events’ such as starting a family, plus an ‘exotic holiday fund’, Goodman Masson won the admiration of the judges in a tightly contested field to win the Award for Employee Benefits.

Recruitment company Goodman Masson has an ambition to “treat our people better than any other business in the UK”. To support this, it created a trademarked flexible benefits package called The Benefits Boutique, offering a range of traditional benefits topped with some more unusual options.

Its approach to creating a unique working environment, which it calls The Experience, consists of four key pillars: to ensure people have the right tools to do their job; to ensure they can develop professionally; to ensure they are well and correctly rewarded and to create an environment people want to be a part of.

Elements of its benefits package are linked to ‘life events’ such as buying a house and starting a family – the company currently has 38 people in a mortgage fund, for example, and 11 employees have taken advantage of a home improvement loan. There is an ‘exotic holiday fund’, and Goodman Masson will pay 30% of the cost of any course or lessons employees take up to learn a new skill.

The company has won numerous accolades, including being ranked third best UK workplace in the Great Place to Work awards. It was deemed the number one company for work-life balance by Glassdoor and 70% of staff have been with the company for more than two years – an impressive retention rate in the recruitment industry.

Our judges were impressed by “a most innovative offering”, saying the “generosity of benefits is something never seen before”.

Like many NHS trusts, Sandwell and West Birmingham has experienced a shortage of nurses. In 2015, it faced the challenge of recruiting and retaining staff while tackling escalating spend on temporary staff and undergoing a redeployment programme that was negatively impacting on the workforce.

In April 2016, the trust developed SWBH Benefits, managed on a single platform and supported by a dedicated team. It also created the new position of head of employee benefits. Identifying that one of the key issues was communication with frontline staff (74% of staff spend their time away from desks and PCs), there was a need for physical rather than digital engagement.

SWBH Benefits was launched at the trust’s largest ever staff event and around 150 communication champions helped to get the word out across departments. Flyers and memos in wards helped to communicate the scheme further.

The trust’s 2016 staff survey showed an improvement in stress levels and reduced sickness absence (down to 4.5% from 4.9%), as well as reduced staff turnover for nurses (down from 13.6% to 11.6%). Almost nine in 10 staff feel the new benefits package is an improvement. The trust has also been asked to consult with other trusts across the region to help them come up with a similar offering.

The housing sector has been through a series of challenging periods since the downturn in 2008, and Barratt Developments was one of the first to use flexible benefits as a way to engage employees in a tough market.

In 2014, as the housing market began to grow again, many employers in this sector faced skills shortages after so many employees had been made redundant during the downturn. The sector had an ageing workforce and often relied on self-employed subcontractors.

As part of a drive to make Barratt an employer of choice for permanent and contract staff, the company asked employees to report back on what they felt were valuable benefits and where it could improve.

The results of the research revealed that contractual benefits needed to be enhanced to become more competitive, there was poor appreciation of the voluntary benefit package and barriers to access, and that employees wanted more benefits focused on health and wellbeing.

In response, Barratt has enhanced its contractual and voluntary benefits, including a new one-stop platform where employees can view all of the voluntary benefits on offer. Sub-contractors have access to specific benefits and the overall messaging has been re-branded as My Barratt Staff Shop.

Our judges said: “The organisation took on board employee feedback to enhance the benefits on offer and they have carefully managed the roll-out to a geographically diverse workforce to great effect.”