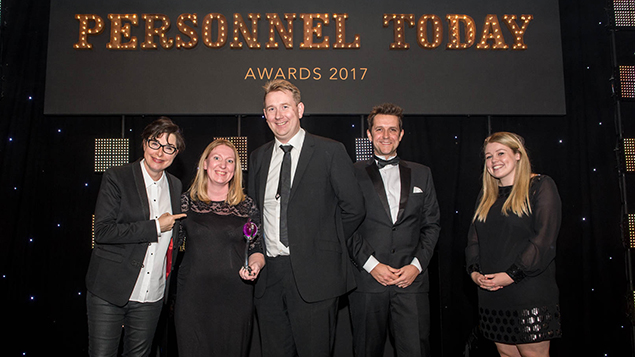 Kerry Foods created the perfect recipe to win the keenly contested Employee Engagement category at the Personnel Today Awards, sponsored by Great Place to Work. Here we profile Kerry Foods’ winning entry and those other organisations to  make the shortlist.

Complacency and tough market conditions were impediments to growth at Kerry Foods in 2015-16. Its response was to redouble efforts to engage its 6,500 staff in the business with a refreshed Purpose Vision and Values plan.

A steering group was formed with representatives from all parts of the company to align the engagement strategy to the needs of the business and its people. This aimed to create a compelling story to help colleagues appreciate the journey the company was on and how every employee was a part of that journey and connected to each other. The narrative linked pride and purpose, opportunities and challenges, values and vision in a hopefully inspiring and clear story framework.

Because shift patterns made it difficult to reach much of the workforce, the story was taken to teams by leaders after coaching and discussion. Alongside this a Trailblazers initiative was launched to involve staff in putting forward new ideas and a recognition programme was set in motion that ties in with the story and the revamped values. The results have seen 100% “strongly agree” that they understand the journey and their role in it, against a background of 2.1% volume growth and a higher trading margin. Finally, the company has moved from 42nd to 14th place in Management Today’s Britain’s Most Admired Companies listing.

Dulas is a co-operative renewable energy firm of 70-plus members based in rural Wales. In recent times the climate for renewable energy has changed with government cuts to incentives. It was felt that improving staff engagement would be a way of challenging the cuts and ensuring survival. Staff already had a strong sense of ownership of the business because they are all shareholders, so communication is relatively transparent and employees feel they have a say.

At the centre of the staff engagement effort is the Innovation Group Programme which is a conduit for ideas, meeting formally every month. One idea that came from the Innovation Group is the Solar Socket, a product of USB/cigarette lighter ports that’s charged by solar energy. It is now being used across the developing world and features on the shortlist of innovation awards.

Dulas promotes work/life balance through home working, flexi time and sabbaticals policies and actively discourages micro management and excessive bureaucracy. Since the engagement policy was sharpened the company’s turnover has grown and retention is now at 91%. Career progression has improved and so has the gender balance – the workforce is now 42% female (the average is 25% in comparable businesses).

A new leadership team agreed values based around integrity and mutual support and a new colleague strategy, Being Passionate about People, was established. Staff surveys have revealed positive results, with 97% of staff stating there was high morale in their teams in 2016. Twice weekly standup meetings have ensured people can share their views and hear the latest information on business performance and now 85% of staff say they feel valued and 91% say they are highly motivated.

In addition, staff have been able to get involved in voluntary work through partnerships with charities. Managers at the firm have been informed by a leadership framework that employees feed in to, assessing managers’ skills and behaviours. The results are persuasive: staff turnover has fallen from 102% in 2013 to 11.5% in 2016 and length of service has doubled from 14 months to 28 months in the same period. It is the increased involvement of staff in the company since 2013 that is responsible for this dramatic turnaround.

One Stop Stores is a leader in the UK convenience store market with a key focus on being the best store for customers in the local neighbourhood. Owned by Tesco, but operated as a separate business, it has over 750 stores in England and Wales, employing over 10,500 people. The company found via a survey in 2016 that only 74% of colleagues felt connected to its values and purpose.

Existing processes were reviewed and a toolkit created that introduced staff to the company’s core purpose and revised leadership skills and values. Intensive one day training workshops were conducted for all colleagues enabling two-way communication between all levels of staff and supporting the new values. One of the essential components of the new approach is a Employee Engage App, a mobile interactive tool brining benefits, reward, recognition, training and development together – very important in an organisation with so many diverse staff geographically spread far and wide.

The App has massively improved communication and feedback and given benefits to staff in areas such as childcare and wellbeing. Take up has been high with all colleagues signing up for the app and efficiency greatly increased with online payslips now being available as well as job vacancies and internal opportunities. The most recent survey has shown that colleague engagement is now at 91%.

This holiday park firm was formed in 2015 after a merger. With 6,000 seasonal and 1,600 established team members the HR team outlined communication plans, cultural strategies and talent management initiatives to integrate the businesses. It was considered essential that the HR team worked collaboratively to support the business to create consistency, gain trust and buy-in from all its employees.

It was also recognised that customers were pivotal to Parkdean’s success and that without their input the overall strategy the strategy could fail. The merged company worked with senior stakeholders, investors and external experts to provide guidance on successful integration. An employee business forum provided colleagues with an opportunity to meet regularly, and represent all departments and levels throughout the business, to make changes and air concerns.

A pulse survey was launched to find out what engagement levels were that was followed up by listening groups to ensure views were heard and concerns understood. Recognition “cafes” were held that brought people together to recognise achievements and a series of awards schemes was put in motion to celebrate great work in customer service, management, innovation and dedication. As a result of these initiatives engagement scores increased from 53.4% to 57.8% and 86% of colleagues said they “loved” working for the company.

Property management and development group Sovini has grown rapidly in recent years but has faced risks to its income from government welfare reform. It is comprised of commercial and not-for-profit organisations that face differing demands and have different cultures.

The challenge faced by the group has been to foster a culture that enhances engagement, wellbeing and promotes dialogue across its diverse elements. To this end, Sovini introduced a Good to Great initiative, to ensure staff were committed to the group’s goals and values and had an enhanced sense of their own wellbeing to include mental health and feeling content. The group feels this is a vital component in motivation and productivity.

Having used feedback and surveys, Sovini structures its health and wellbeing plan around different companies to meet their individual needs. Inter-company involvement is promoted and the group recently staged the Sovini Games. This was a week-long series of team-building events, open to all staff, with mental and physical challenges – all with an emphasis on fun. Staff summer parties, Christmas parties, children’s Christmas parties and staff socials all helped cement this further.

A work/life balance charter has also been established and a bonus and share scheme encourages inter-company teamwork to ensure targets are reached. The results of these, and other initiatives, are that staff turnover has fallen to 10%, 92% of staff say they are proud to work for Sovini and the group came 3rd in a Great Place to Work awards earlier this year.

The UK’s largest, dedicated Ford dealer group, TrustFord operates 60 dealership sites with 3,200 colleagues across the UK. In 2014, the company redefined its purpose, principles and ambition (PPA) which underpins all of its activities.

In terms of employee engagement specifically, the firm set up a number of programmes: open forums, at which colleagues share concerns and ideas; “town halls” at which board members visit sites and sit down with colleagues at all levels; “management cascade” involves sharing business updates with teams; an app that enables staff without computer access to book holiday, check company dates and find out more about the company; Magic Moments entail the setting aside of funds for informal team-building.

Coupled with these schemes is a comprehensive recognition programme rewarding colleagues who have demonstrated PPA to a particularly high degree with gold badges, personal letters from the CEO, formal presentations of PPA cards at team meetings and an annual excellence awards. The results are encouraging: retention at six months has risen to 91% from 41% in 2015. Staff turnover has fallen to 21% in 2016 from 26% in 2014, and the company has risen up the rankings in the Sunday Times Best Large Companies to Work For listing to be 22nd out of the top 30 large firms.

In 2012-13, the Trust set about transforming its culture so that staff at all levels were empowered to improve care, show leadership and commitment to continuous improvement. It was felt necessary to reconnect employees with the Trust’s core purpose.

Among some of the Trust’s initiatives was Listening into Action and Improvement, which is based on the simple premise of empowering staff to lead on making positive changes to clinical care. This garnered praise from the Care Quality Commission, which stated “that it has led to significant quality improvements for patients”.

Also central to the Trust’s drive was the #FlourishatWork campaign, which encouraged all staff to take measures to improve their health and wellbeing – it involved encouraging staff to get more physical activity, to nourish and hydrate themselves better and to look after their mental wellbeing. A range of health and wellbeing challenges were set, including a Trust-wide step challenge supported by daily walks, installing watercoolers in every area and removing sugary drinks and goods from vending machines, organised sporting activities and mental wellness giveaways.

Staff turnover has reduced over the past year and now stands at 8% as opposed to more than 9% in 2014-15. More importantly there has been significant progress in patient safety in areas such as sepsis and acute kidney injury. The Trust has found through these programmes that if staff are treated well and nurtured they will actively improve the organisation’s outcomes and, in Morecambe’s case, ensure the highest levels of patient care is established.