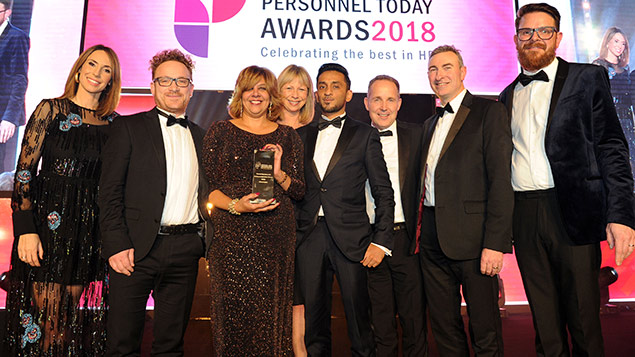 Members of the HM Land Registry team receive their Excellence in Public Service prize at the Personnel Today Awards 2018.

The success of its first apprenticeship scheme persuaded the Personnel Today Awards 2018 judges to award the Excellence in Public Service HR Award to HM Land Registry. In a tightly contested category, it was clear that each of the public sector organisations shortlisted had developed successful initiatives.

When the property market recovered after the crash of 2008 and following the civil service-wide recruitment freeze, HM Land Registry was faced with skills shortages, resource issues and an ageing workforce. Less than 1% of its workforce were under 30 years of age, with many approaching retirement.

The solution was to develop its first apprenticeship scheme, led by HR but involved collaboration across all parts of the organisation.

Having not recruited since 2007, processes and materials were out of date. In just 12 weeks, the organisation had to design entry-level roles for the first time in 20 years, develop a training programme and update all recruitment, induction and training processes.

Part of the project was the development of its first digital recruitment campaign, which attracted more than 1,000 candidates with 175 shortlisted. Sixty business administration apprentices were introduced initially, but due to the success of the programme, this increased to 80 a few weeks after its launch.

Since September 2014, 547 apprentices have joined HM Land Registry, with a 92% retention rate. Three-quarters of the apprentices secured permanent roles and apprentices now represent 6% of its workforce.

This year the number of apprenticeship programmes on offer will increase from eight to 15, including a new focus on leadership and management apprenticeships.

As part of a completely new organisation, the Department for International Trade’s HR function had the challenging task of quickly upskilling and onboarding hundreds of new joiners so the department could quickly begin establishing trade deals after Brexit.

In some cases, it was venturing into uncharted territory and had to learn from best practice in other organisations, such as the World Trade Organisation, to develop an international trade profession for Whitehall. This included a set of career profiles and an L&D curriculum.

To help employees develop their skills while delivering value for money, it launched a self-managed learning platform which has been accessed more than 5,000 times. Leadership conferences were also established, offering one-to-one coaching and masterclasses.

The Department for International Trade said other government departments have held its achievements up as an example of best practice: in particular its HR Advisory Service – which provides advice over the phone – and the international trade profession.

To improve the quality of selection decisions across the civil service and reduce recruitment costs, the Government Recruitment Service developed a new psychometric assessment programme for all departments and grades of seniority.

The online platform needed to be developed and delivered in five months and, keeping with the government’s ambition to be the most inclusive UK employer by 2020, it needed to be accessible to all candidates.

More than 3,000 questions were devised and reviewed by 74 internal “experts”. The assessments also involve several multimedia elements, for which 67 videos were produced in just six days.

Contributors from 27 professions and 98 government departments or agencies were involved in the project, and the Digital Accessibility Centre tested the software to ensure it met accessibility standards for those with disabilities.

Since its launch in February 2017, the assessment has been completed by 175,000 applicants and more than 100,000 job seekers on its practice site. It has helped fill over 1,200 vacancies from administrative to leadership roles.

The Government Recruitment Service estimated that the assessment has saved more than £561,000 as fewer people are needed to manually sift job applications.

Following the introduction of the Academies Act, schools had more freedom to choose a third-party HR service, with many opting for a private sector provider over a local authority. North Yorkshire County Council decided its services needed to be more competitive, offering core HR support with additional commissioned services if needed.

Through its Schools HR Advisory Team, the council offers the development of HR policies, a “bespoke” HR service training and Ofsted preparation for schools. It uses a core team of around 30 HR staff, but additional advisers are used on a freelance basis to help with peaks in demand. Other services – such as an occupational health advisory service – can also be added on as and when.

Since the service was launched, the council has secured £400,000 in contracts from new clients. It has  generated a £250,000 surplus, which is being reinvested back into the council’s frontline services.

The Schools HR Advisory Team works with 440 clients across eight regions, including Teesside, York, West Yorkshire and East Riding. It has also partnered with City of York Council to offer HR services to 40 new schools, generating a further £150,000 in income.

oneSource began as a shared service providing support for Havering and Newham Councils, but with both councils facing budget cuts, oneSource recognised that it needed to increase its customer base in order to survive.

The result was the development of a new HR and organisational development service, which it hoped would appeal to businesses outside of its core council customer base.

The service, which offers investigations, mediation and HR consultancy, has helped generate around £100,000 in additional annual income and since October 2016, contracts have been signed with 10 organisations outside of its core council customer base.

Its work has included developing investigations training and sickness absence briefings for a company’s frontline managers; launching a leadership development programme; the facilitation of a TUPE transfer of NHS staff into a business; and the development of a wellbeing strategy.

It has also developed tailored HR newsletters for its clients, which includes forthcoming legislative changes and other information they need to be aware of.