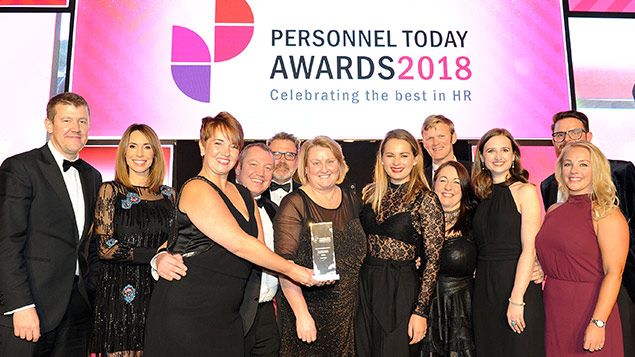 Under its “Everyone Welcome” and “Everyone Safe” strategies, Virgin Money is striving to transform minority representation and inclusivity, with specific initiatives aimed at women, the LGBT+ community, BAME staff and those with disabilities.

It has linked its executives’ annual bonus to achieving 50:50 gender balance at all levels. Flexible working in senior positions is promoted and those who have taken a career break are offered the ability to take part in its Re-Career programme to get them back into the workplace. In 2017, 29% of its senior team were female, compared with 18.5% in 2015.

To support LGBT+ staff, Virgin Money arranges events with external speakers and informal social events to raise awareness of key issues. It has introduced a gender transitioning policy, an LGBT+ guide and has gender neutral toilets.

It works with charities in Newcastle and Sunderland that support ethnic minorities and has developed leadership programmes aimed specifically at BAME candidates.

Potential applicants with disabilities are offered work placements through several charities and it work with the National Autistic Society to recruit into permanent roles. As a result of these and several other initiatives, disability representation increased from 3% in 2016 to 4.1% in 2017.

Recognising that the financial services sector has a shortage of candidates from minority groups, Barclays wanted to ensure its future leaders represented all cultures, backgrounds, ages and gender identities – much like its customer base.

To do this, it developed a series of apprenticeship programmes targeted at people from various groups – from BME candidates to those from the LGBT community.

One such programme is its “Bolder” apprenticeship, which was created specifically for older applicants. Over-25s now account for 20% of its apprentices, compared with just 4% in 2015. It also has apprentices in their late 60s.

Barclays has encouraged job applicants to open up in confidence about anything they felt might affect them in the workplace, such as a mental health issue or a disability. It said almost half of those who applied for a job at the company this year chose to share something on its “Open Up” platform.

Barclays said its focus on attracting and celebrating diverse candidates has resulted in greater collaboration across the business. A fifth of staff who joined this year identify as BME (9% above the national average), while the percentage of candidates with disabilities has increased from 3% to 8%.

Through its Career Returners programme, Legal & General wanted to attract women who had taken a break of two or more years from their career, whether they had left the workplace to have children or go back to university.

To do this, it turned the concept of a career into a tangible being with emotions and a personality and used this character to promote its programme at an event specifically for career returners and on a dedicated website.

Although the campaign was not overtly aimed at women exclusively, 17% more women than men read about its returnship scheme on Legal & General’s website. Women also spent 18% more time reading about the scheme than men, with only a 12.5% exit rate.

Almost half of the website viewers were in the 25-34 age bracket it was seeking to attract, 45% more than before it began its campaign.

MTR Crossrail will be the operator of London’s Queen Elizabeth line, linking west and east London. Like many companies in the male-dominated rail sector, it wanted to attract more women, BAME candidates and younger people and launched a series of initiatives to promote diversity and inclusion.

It sought to encourage more women to apply for driver roles by holding a driver experience day specifically for women, where they were given the opportunity to use a train driving simulator and discuss the role with its current female drivers. Successful applicants were invited to a lunch in order to network and share their experiences with the MTR Crossrail recruitment process, which helped inform the company about how it could be improved.

Unemployed young Londoners were also targeted through a two-week course, which looked at improving interview skills and confidence, while female ex-offenders were approached through two employability workshops at HMP Downview and HMP East Sutton Park.

After discovering that women at ODEON were three times less likely to be promoted than men, despite performing just as well, the chain launched its “Our Incredible Differences” programme to recognise and celebrate its diverse workforce.

Those identified as “high potential” women were invited to public speaking and leadership workshops and were partnered with a “plus one” male colleague, who was encouraged to support them through their career development.

The company also began to speak openly about the imbalance of women in senior management positions. As a result, the proportion of women in senior roles increased from 18% to 34% and there was a 15% uplift in the number of women applying for internal promotions.

Eighty per cent of its senior management team has received D&I training, with the remainder booked in to attend the course. A total of 530 hours were spent on D&I training across the group in 2017.

This year, the company held its first ethnic diversity workshop, which discussed employees’ experiences of working at ODEON and ideas for how it could promote diversity. It plans to celebrate a wider range of festivals and cultural days and showcase its employees’ career stories.

Realising that it could miss out on talent or face reputational risk if it did not try to attract a more diverse workforce, RSA Insurance set itself the ambitious target of a minimum of 33% representation of women in senior roles by 2020 across all of its regions, including the UK, Scandinavia, Canada and the Middle East.

Strong progress has been made in the UK in particular. In 2017, men and women were promoted in broadly equal proportions across its senior leadership roles it has formed groups where staff can feed information back on how diversity can be improved.

Its executive team have had unconscious bias training and all of its staff will have soon completed the course.

The company is attempting to broaden its employees’ understanding of diversity and inclusion by asking questions about ethnic identity, sexual orientation and disability status as part of its engagement survey. It hopes this will help it understand whether all groups have the same experience while at work.

Through its “Accelerating You” programme, Santander sought to identify high-potential mid-tier women with the aim of helping them move into senior positions.

Between each module, participants are also invited to a group coaching session, which helps them develop support networks and discuss their development with their peers.

Delegates reported that line managers have seen a difference in their performance and many in the 2017 cohort have had a change of job role as a result of the skills developed over the programme.

Santander said the promotion rate for those who have taken part in the programme exceeds its baseline promotion rate by three times, which has helped improve equality and inform succession planning across the business.

Brexit has had a huge effect on the confidence of EU workers in the UK. Recognising that a significant proportion of its warehouse staff are from overseas and wanting to protect its dedicated workforce, The White Company set about promoting why cultural diversity was important at the business.

It developed a campaign to make workers from overseas feel at home working for The White Company. A series of interviews with warehouse, contact centre and in-store staff were filmed and posted on social media, discussing their home countries, holiday traditions and what it was like working for the business – in English and their native languages.

The videos were used as sponsored Facebook posts and YouTube advertisements, targeted by location, language and interests. Advertising was also targeted at people in Poland looking for flights to the UK.

The business saw a 1043% increase in visits to its careers site as a result, and a 40% uplift in the quality of applications overall.