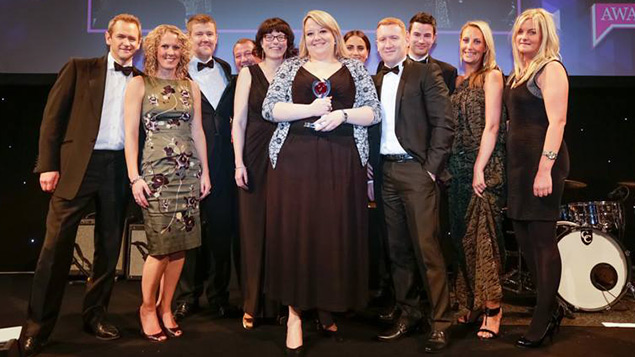 Virgin Money collect their trophy for 2013 HR Team of the Year award.

The sheer scale of the challenge presented to the HR team at Virgin Money – which acquired ailing bank Northern Rock in 2012 – would have been more than enough to impress the team of judges.

But it was also the speed with which they achieved their goals and the effect the change programme has had on Virgin Money that helped it to be shortlisted for and go on to win both HR Team of the Year and the Award for Managing Change.

“The circumstances meant we had to tackle everything head on; we needed to make progress with that speed,” explains people director Matt Elliott. “I thought at the start of 2012 when we started out that we’d manage around two-thirds of it, but we got through everything.”

When the acquisition completed on 1 January 2012, the main priority for HR at the newly formed company was to harmonise terms and conditions. This was no small feat, as the workforce had increased to 2,500 employees overnight.

“We wanted to create a company with no legacy issues,” says Elliott. “All employees wanted to know was whether they were getting the same deal as someone else.”

Elliott formed a weekly working group consisting of members of the HR team, and a new senior and executive team structure was introduced from day one.

On a broader, strategic level, the Virgin Money team had the ambitious aim of creating a culture to make “everyone better off”, whether they are employees, customers or the local community.

Elliott explains: “In financial services, we have a job on our hands to regain customers’ trust. We want to become the bank that people deserve.”

So while the change programme was focused heavily on practical HR issues such as terms and conditions, communicating the company values and ensuring staff bought into its wider philosophy was key to its success.

The results were impressive: 99.6% of staff signed up to the new terms and conditions, while staff turnover has reduced from 11% to 7%. The employee engagement score now stands at 85%, according to Elliott.

In order to build on its success, Virgin Money is now revamping its learning and development offering through an online hub called Learning Lounge.

This maps everyone’s role in the company and shows staff the development activities that can take them from “foundation” level in their job to excellence. There are also opportunities for personal development, reflecting the bank’s altruistic outlook.

Elliott does not underestimate how much energy the team has expended to manage a change project of this scale, and is mindful of how everyone pulls together.

“At times when it feels harder, we recognise this and move resource around,” he says.

And it was winning the team award that fully demonstrated the success of this fair and collaborative approach. “It’s what we’re all about, our purpose as a company,” Elliott concludes.