What it’s really like to work in HR at Google 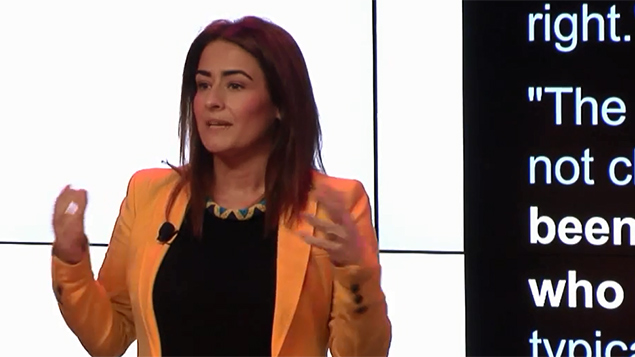 If you’ve ever seen the film The Internship, you probably have a set idea of what it might be like to work for the world’s most famous search engine company; everything is in primary colours, all of the food and drink is free, and they even have slides in their offices.

But while art does imitate real life to a certain extent (the food really is free), Google has grown its workforce phenomenally to more than 40,000 since it started in 1998, and has had to evolve its HR practices to accommodate.

In fact, HR at Google (known as “People Operations”) incorporates many of the features we might expect from a more “traditional” corporation: business partners, central programmes around diversity and culture, and a very busy recruitment function.

At the recent Google Atmosphere event at the company’s London headquarters, an audience of HR professionals got a taste of what life at Google is like, and this is what they discovered:

“We’ve grown at a fast pace, but the culture and type of people we hire have stayed the same,” says Barbara Matthews, an HR business partner. There is a flat management hierarchy, and every Friday founders Larry Page and Sergei Brin hold a Q&A where “Googlers” can ask any question they like. “We want people to stand up and say if they think something is wrong,” says Matthews.

Role descriptions are not set in stone, and the aim is to “only create as much structure as is necessary”, with mobility and movement through the company encouraged.

The working environment itself has been designed to facilitate more collaboration; there are long tables in the canteen so workers from different departments can sit together.

Google employs 600 people globally who just focus on recruitment, and every year the company hires thousands of new staff from millions of applications (not to mention the candidates it sources through its own searches).

“It’s such a huge volume, the obvious issue is how do you keep the bar high and keep it diverse?” explains Jamie Hinton, a senior recruiter.

There is also a lot of mythology around the hiring process at Google – that it runs endless selection rounds and asks questions such as: “You are shrunk to the height of a nickel and thrown into a blender. The blades start moving, what do you do?” – but Hinton says this is no longer the case. “The only value here is in making the interviewer feel smart. We want people to solve problems, but we’ll do that with role-related questions,” he says.

Managers who have worked at Google for more than six months get trained up in recruiting and it becomes a core part of their job. They receive template questions they can customise for different roles and are coached in recruiting against four key competencies: suitability for the role, leadership, cognitive ability and finally, their “Googliness”. The latter is judged through hypothetical interviewing, with questions such as: “How would you react if…?”

With such a high volume of applications, the recruitment process at Google is hugely data driven. The company stores millions of CVs in its applicant tracking system (ATS); every interview has a scoring system so that hiring managers can run reports on people who have applied and how their score might map to a potential role.

In certain situations, this means it can bring people on board very quickly. Hinton gives the example of careers fairs in India where MBA graduates visit Google’s stand showing an interest, a group of resourcers in the background can then run a search on the ATS and on LinkedIn to see if they match up to requirements, hold an interview over Google Hangout and, in some cases, even make an offer on the same day.

Recruitment is just one example of a wider focus on big data in HR at Google. One of its senior vice-presidents, Prasad Setty, runs the company’s People Analytics department, which crunches the numbers on everything from the relative impact of speeding up the onboarding process to how to maximise every employee’s potential contribution.

Like many organisations, Google has faced low response rates to engagement surveys (at one point around 30% or 40%), and has worked hard to turn this around. “Googlegeist”, as its annual engagement survey is known, is now taken by 93% of the employee population.

Aimee O’Malley, learning and development (L&D) business partner, says a combination of fast feedback and being seen to respond to people’s concerns has driven up response rates. “One of the issues raised was that people weren’t aware of the resources available to help them develop their career, so we launched an ‘Optimise your career’ programme.”

In building engagement, Google also focuses on the traits that make a good manager, through a programme called Project Oxygen.

This drew on the results of engagement surveys and other sources to identify eight key attributes that made effective managers – such as communication, not micromanaging, and focusing on team members’ career development.

“Managers are resourcers not bosses, they facilitate and coach,” says Matthews.

Would it work for you?

Monica Parker, workplace director at Morgan Lovell, discusses what drives individual instincts and behaviour to understand how to create an atmosphere that supports authentic collaboration.

There’s no debating that the HR setup at Google works for Google – it continues to rank top of Forbes’ best places to work list and is bombarded with speculative applications every day. But replicating this in an organisation with different business goals and a slower growth curve might end in chaos.

Monica Parker, workplace director at workplace consultancy Morgan Lovell, says that one of the most useful lessons we can learn from the search engine giant is to build a culture of openness: “It’s about creating the opportunity for people to bump into each other – a space that empowers them to do the best they can.”

Watch Aimee O’Mally’s full talk on employee engagement (below), and watch an interview with Rachel Miller, founder and director of All Things IC, on the value of internal communication to smart organisations.