Southern rail dispute: suspected unofficial industrial action and how to deal with it 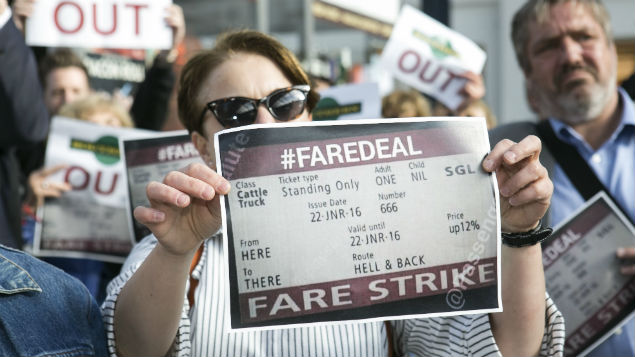 The CEO of Southern Railway has blamed train cancellations and overcrowded trains on unofficial industrial action. With 350 trains set to be axed from the timetable, Tom Kerr-Williams looks at the difficult choices facing employers when there is a spike in sickness absence during a dispute with workers.

Southern Railway has recently been in a dispute with its recognised trade unions over plans to downgrade conductors and give the control of train doors to drivers. The National Union of Rail, Maritime and Transport Workers (RMT) says that the plan will put safety at risk and has held a series of strikes.

What is the difference between official and unofficial industrial action?

Deal with a case of persistent short-term sickness absence

Southern has also noted a significant surge in sickness absence, leading their CEO to claim in The Telegraph that conductors are taking unofficial industrial action in the process. Is he right? What steps can Southern take if he is, and what concerns might the employees off sick legitimately have?

A spike in sickness absence is a common feature during an industrial dispute. Many employers with heavily unionised workforces have come to expect it, making contingency plans as appropriate.

The reason such action is perceived as popular is that, while strike action usually leads to a deduction in pay, sickness absence does not. Employees can therefore have the same impact upon the employer’s business without losing money.

Employers and employees face some difficult choices in relation to such action, which can lead to challenging disputes of fact and principle. The primary question being whether employees are genuinely sick, or are withdrawing their labour and hence taking strike action. Unions who endorse such action face sanction, but proving such endorsement can be very challenging.

The law and unofficial industrial action

Since the Thatcher era, UK law on industrial action has been restrictive for employees and the trade unions who represent them. Employees in the UK do not have a “right to strike” or a “right to take action”. Instead, UK law starts from the position that industrial action is unlawful but provides immunity from sanction if certain prescriptive rules are followed.

Industrial action can take the form of a strike, or something less than a strike – such as an overtime ban or withdrawal of goodwill. It almost always involves employees acting in breach of their contracts of employment. Were it not for the protections afforded to employees by the law, such a breach of contract would ordinarily lead to fair dismissal of the employee and, of potentially more value to the employer, a claim for damages against the trade union that procured the breach.

Employees and unions do, however, need to exercise care to ensure that those protections apply. Where a properly conducted ballot has been carried out, and appropriate notifications given to the employer, strike action or action short of strike will generally be protected. This means that the employees cannot be disciplined or dismissed for taking part in the action and the trade union cannot be sued for the damage that the action causes.

What can employers do if they suspect sick leave is not genuine?

Where an employee chooses not to attend work, the question is whether they are genuinely off sick or whether they are in fact taking part in industrial action. No sensible union would openly call for employees to dishonestly claim that they are sick. More likely is that a union might encourage employees who feel under genuine pressure from the industrial dispute to only attend work if they feel able. Either way, employees are either withdrawing their labour, or they are ill. If the former, then the employees (and the union, if endorsement can be proved) are at risk.

The onus will be on the employer to prove that an employee was taking part in unofficial (and unprotected) industrial action. But doing so can be problematic.

Where the employee claims he or she cannot attend work through illness, a presumption is likely to exist that the employee is telling the truth unless the contrary is proved. A spike in absence is some evidence, but unlikely to be conclusive on its own.

In many cases, employers permit employees to self-certify for short periods of absence, meaning that a doctor’s certificate will not normally be required for a single day off work. Employers may, however, be at liberty to change such a policy where justified in doing so.

One potential response to perceived or anticipated unofficial action is to communicate to employees that during a period of industrial unrest, any periods of sickness absence (even of just one day) must be supported by a doctor’s certificate and/or will be subject to further investigation by occupational health.

Employees can also be reminded of the danger of seeking to take sick leave without proper justification. These steps should help limit dishonest absence, but will put genuinely sick employees under much more pressure than usual and the employee relations impact of such an approach will need to be considered carefully, together with any restrictions contained in employment contracts and collective agreements.

The good news for genuinely sick employees is that production of a valid medical certificate should generally make them safe from challenge, even where the employer’s suspicions are strong and the timing potentially suspect.