As the debate around transgender rights reaches new heights, Personnel Today invited two commentators to tackle a defining question of our time – what is a woman? Here, Robin Moira White, a trans barrister and joint author of a specialist legal guide on transgender law, provides her answer and explains what it means for employers.

“What is a woman?” is the political “gotcha” question of the moment, sometimes paired with its less respectful companion “Can a woman have a penis?”

Most prominent UK politicians have been asked the question and it even made it across the pond to the confirmation hearing for US Supreme Court Justice Ketanji Brown Jackson. One might equally ask “What is a man?” but that appears not to have the same tabloid appeal.

There are political, practical and legal answers to the questions, relevant to workplaces and HR professionals as in wider society.

The question is used as an anti-trans “dog whistle”. Any perceived failure to answer promptly with equally dog-whistly “adult human female” or “biological female” is seized on with a suggestion that the interviewee “does not know what a woman is” or cannot be trusted to support women’s rights.

What is a woman? 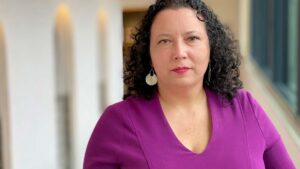 For 98% of the population, these questions are banal, even absurd. They have never questioned their gender and probably would not ever think of having a gender identity different from their sex. But for those with gender incongruence the answer is not so simple.

The medical profession has moved away from regarding gender dysphoria as a medical condition that can be cured or treated, but rather view “gender incongruence” as a feature of the rich tapestry of human experience that needs to be understood and accommodated.

This is just the same as the change more than 40 years ago when variations in sexual orientation were similarly recognised as normal and efforts to alter a person’s sexuality moved to the lunatic fringe. Society is a few years behind with gender identity but the journey leads to the same destination.

So the sensible answer is to recognise that “What is a woman?” is a complex question for a small proportion of society. That is the real answer as veteran campaigner, Labour’s Emily Thornberry, demonstrated so well when faced with ‘the question’. To deny the complexity is to deny trans people’s legitimacy, even very existence. And that denial is often the point of asking the rhetorical question.

The law in the UK – fortunately for trans people – engages with the complexity. The Gender Recognition Act provided in 2004, under pressure from European jurisprudence, a method for the state to recognise a change of legal sex. From 1999, discrimination on the grounds that someone was undergoing or had undergone a process to reassign their sex was made unlawful. So for 20 years, the legal definitions of sex or gender have accommodated complexity.

If you believe in a diverse, accepting society, or you are a forward-looking employer wanting your employees to bring their whole selves to work, this is your fight as much as any trans person’s”

The accommodation is not complete. Non-binary trans people are poorly served (apart from the advance obtained in 2020 in Taylor v Jaguar Land Rover) and the de-medicalisation of a trans status is only slowly being accepted.

When, for example, citizens use changing or toilet facilities in a shop, we do not provide our birth certificate or take a chromosome test. Rather we are judged on the outward expression of our sex category, our gender. That is why the statutory guidance says that service providers should normally accommodate customers according to their gender and why the non-statutory guidance, referring to biological sex, put out for apparently political purposes by the Equality and Human Rights Commission last month is both wrong in law and unworkable in practical application.

The law also understands that discrimination is in the eye of the discriminator. So a trans woman perceived as a woman and discriminated against because she is a woman, will be a woman in the sight of the law.

And the cases of Croft v Royal Mail Group and A v Chief Constable of West Yorkshire Police demonstrate very clearly that in discrimination law a time will come when an individual is to be accepted in their affirmed gender for discrimination purposes. Section 7 of the Equality Act 2010 refers to ‘physiological and other attributes of sex’ so Equality Act ‘sex’ is not biological, as the EHRC erroneously are now saying. Baroness Falkner, the EHRC’s chair, should read the Act

The accommodation and legal rights of trans people are now repeatedly under attack from those who would role it back, both in the UK and abroad.

A narrative that accommodating trans people is in some way a threat, particularly to women, now has shrill and persistent voices promoting it. Some on the right of politics have picked up on this as a useful political football, with little thought, it appears, on the effect that promoting that narrative has on vulnerable people.

The old enemies of liberal western democracy are again on the march, shrouded in the sheep’s clothing of ‘sex-based rights’. Be in no doubt that gay rights or women’s bodily autonomy would be next on the agenda.

So the ’What is a woman?’ question is useful because those who ask it, for effect or expecting a simple answer, ‘out’ themselves as adopting a reactionary position to the rich tapestry of human existence. If you believe in a diverse, accepting society, or you are a forward-looking employer wanting your employees to bring their whole selves to work, this is your fight as much as any trans person’s.

Read Maya Forstater’s answer to the question ‘What is a woman?’

Robin Moira White of Old Square Chambers became the first barrister to transition in practice at the discrimination bar in 2011. She has appeared in a number of cases concerning transgender rights, lectures and written extensively on transgender matters for both employers and employees and is joint author of A Practical Guide to Transgender Law the only specialist text in this area.

How to encourage LGBT+ allyship all year round

Barrister can proceed with philosophical belief claim against...

Do we still have pride in Pride? Benjamin...