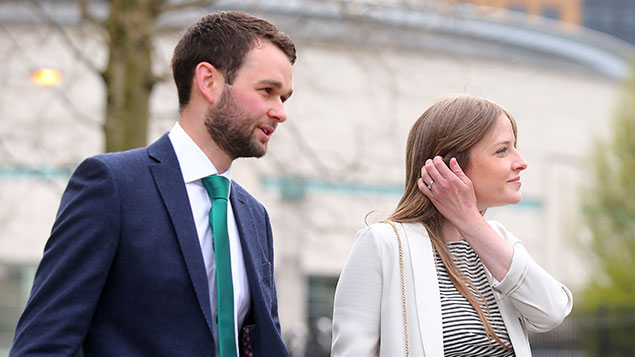 Daniel and Amy McArthur, the owners of Ashers Bakery, arrive at the Supreme Court in Belfast in May
Press Eye Ltd/REX/Shutterstock

The Christian owners of the Northern Irish bakery in the ‘gay cake’ case have won their appeal at the Supreme Court.

Daniel and Amy McArthur, the owners of Ashers in County Antrim, refused to make a cake with the slogan ‘Support Gay Marriage’ for customer Gareth Lee, a gay rights activist, in 2014. He later procured the cake, which included cartoon characters Bert & Ernie, from another branch and was refunded for his original order.

Lee then sued the company for discrimination on the grounds of sexual orientation and belief.

Ashers lost the case and also the appeal, with the appeal court judges deeming that the bakers’ grounds for refusing to make the cake were “a case of association with the gay and bisexual community and the projected personal characteristic was the sexual orientation of that community”, which supported Lee’s claim of direct discrimination.

However, Lady Hale, the president of the Supreme Court, has now ruled that the bakers did not refuse to fulfil his order because of Lee’s sexual orientation.

The five justices presiding over the Supreme Court case were unanimous in their judgment.

“They would have refused to make such a cake for any customer, irrespective of their sexual orientation,” she said.”Their objection was to the message on the cake, not to the personal characteristics of Mr Lee. Accordingly, this court holds that there was no discrimination on the ground of the sexual orientation of Mr Lee.”

Lady Hale added: “This conclusion is not in any way to diminish the need to protect gay people and people who support gay marriage from discrimination.”

“It is deeply humiliating, and an affront to human dignity, to deny someone a service because of that person’s race, gender, disability, sexual orientation, religion or belief. But that is not what happened in this case.”

The decision in this case is relevant for employers because it could influence the outcome of discrimination cases involving sexual orientation or the right to hold religious beliefs.

Nicholas Le Riche, employment partner at law firm Bircham Dyson Bell, said: “The Court found that the decision not to bake the cake was not due to Mr Lee himself but because of the message he wanted decorated on the cake – the McArthurs would have refused this decoration regardless of who the customer was.

“The McArthurs’ own human rights meant that they could not be forced to supply a cake with a message which they strongly disagreed with. The Court was keen to stress that no one should be deprived services because of their personal characteristics but this wasn’t what happened in this case.

Stefan Martin, a partner at Hogan Lovells, added that the Supreme Court had “taken an orthodox and much more limited approach to the extent of protection against associative discrimination than the lesser courts did”.

“In this case there was no suggestion that the owners of the bakery refused to supply the cake because the customer was gay or because he associated with the gay community. Their objection was to the cake’s message, not its messenger, so the sexual orientation claim failed. While the Supreme Court recognises the importance of protecting people against discrimination, this did not justify extending protection against associative discrimination beyond what the Court regarded as its ‘proper scope’.

“This is likely to make claims involving conflicts of rights – for example between sexual orientation and genuinely held religious beliefs – more difficult to bring in the future.”