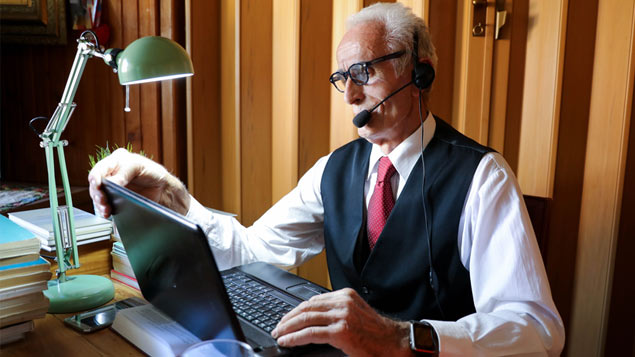 Could employment tribunals begin to look like this? Image: Shutterstock

Last week, employment tribunal judges were advised to hold all hearings remotely because of coronavirus fears – a move that could form a key step in long-awaited plans to digitise the legal process, writes Richard Fox.

The government’s reform programme for the courts and tribunals was not meant to be like this. Launched with a bang in September 2016, HM Courts & Tribunals Service told us it was introducing an “ambitious” programme bringing us “new technology and modern ways of working to the way justice is administered”. Employment tribunals were going to be part of the “digital by default” transformation. Yet, in practice, progress until now has been desperately slow.

To be fair, we were expressly warned employment tribunals were going to be last in the queue. And the government was not joking. Countless meetings and feedback meetings later, we were still barely out of the starting gates. This was quite alien to many employment lawyers. We are used to being in the vanguard of change, not least because our area of the law moves more quickly than most (with the possible exception of immigration).

Well, how quickly things are moving right now. Overnight, it seems, coronavirus has helped to deliver the revolution. To their great credit, the Presidents of the Tribunals in England & Wales and in Scotland (Judges Brian Doyle and Shona Simon) acted swiftly last week issuing their new guidance to deal with the crisis. It drew upon an existing rule (Rule 46) that allows hearings to be conducted by electronic means, provided doing so is considered “just and equitable”. Electronic communication, we were reminded, can include video conferencing and Skype.

The guidance assured us we could reduce the number of “in person” case management hearings by “relatively small changes in practice”. Tribunals also were to start from the premise that hearings should take place by telephone or other electronic means “unless this would be contrary to the overriding objective” (the fundamental principle that underlines all our Rules of Procedure, to deal with cases fairly and justly).

There are new skills we will all have to learn in terms of how best to handle hearings in this new environment. We need to consider what clothes to wear, what backdrops work best, what documentation to have with us in hard or soft copy format during the course of a hearing. We will also need to consider the medium. Skype may be good for business generally, but with its prioritising of the last speaker (whose picture is then underlined), rather than those who are “important”, such as the judge and the primary advocates, it does not necessarily fill the screen in the best, most “court-like” way. In other words the screen could better replicate the actual tribunal room. But that will doubtless be sorted soon.

In terms of efficiency on grounds of geography, use of time and costs, there can be no comparison with the “old way” of doing things.

Now, I know the presidential guidance has been brought in specifically to deal with Covid-19. But the reality is that once the genie has been let out of the bottle, there can surely be no turning back. We are now well and truly into the era of virtual hearings and digital communications. All those questions about how to “rationalise the court estate” and close down little-used hearing centres that cost a lot of money to maintain, have, it seems, been answered at a stroke.

There will still be contested final hearings of course, and, apart from anything else, the best way to test the veracity of a witness is to physically assess their demeanour in the witness box under cross examination by the other side. But that leaves an awful lot of hearings which, in truth, can be carried out almost as satisfactorily via appropriate and dedicated video conferencing facilities. Users are just not going to accept the wastage of expenditure and other resources that the traditional way of holding these hearings inevitably involves.

Having spent much of my career involved in the process of employment law reform, I cannot quite believe how the landscape has changed so radically and so fast“

By focusing on hearings for now, intentionally or otherwise, it means the whole process from the time proceedings are first instituted before the tribunal, through to the hearings themselves, will have to be shaken down and brought into the modern digital era. The Tribunals’ Case Management System, which has been the butt of much criticism for so long, will have to be replaced very quickly with its successor. Fortunately, by all accounts, that successor is showing much more promise than the discredited system currently in operation. I suspect whatever was holding these changes back in the past will not be allowed to halt the unstoppable tide bringing in a new digital, paperless and largely telephone-less system, which employment lawyers anticipate will improve the tribunal experience immeasurably.

Covid-19 will no doubt have a lasting effect on our society and ways of doing things in many areas. We now know employment dispute resolution is one of them.

One Response to Coronavirus crisis accelerates digitisation of employment tribunals