Does play have to be the opposite of work?

By Ben Betts on 14 May 2013 in Learning & development, Opinion, Training methods 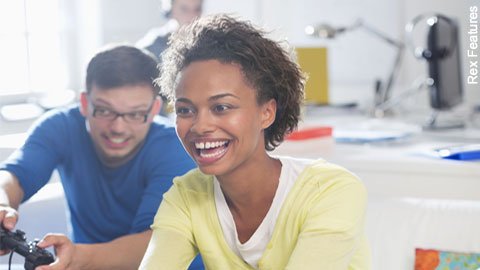 The popularity of computer games has grown exponentially. Games are no longer just for teenage boys – a much wider demographic now spends significant time playing them. As gaming begins to permeate the workplace, Ben Betts asks if play really is the antithesis of work.

Work is serious stuff: there is money to be made, promotions to be gained and lives to be saved. Increasingly, however, a call is being made that we should all be having more fun and playing more games at work. Jane McGonigal’s TED talk, in which she expounds her theories that playing games can save the world, is one of the most-viewed presentations given.

The theory is that games engage millions of people in playful activity each and every week, and aligning that playful attitude with meaningful endeavours could result in more productive workplaces. Understanding what makes games so engaging, and capturing it, could be a powerful tool. McGonigal describes it as a “virtually unprecedented human resource”.

Playing a game is akin to “a voluntary attempt to overcome unnecessary obstacles” says Bernard Suits in his 1978 book The Grasshopper: Games, Life and Utopia. We often struggle to motivate our employees to overcome necessary obstacles, so putting more roadblocks in the way may seem like madness. But games play on our need for mastery, our desire to do well and our drive to “beat the game”.

It is exactly this feeling of mastery that game designer Raph Koster suggests is the root of all fun; that experimenting with a new way of doing something, and finding out that it works, is an inherently pleasurable activity.

We don’t find awards that we are expecting very exciting. We are only momentarily engaged by their presence and we are annoyed by their absence.

Uncertain rewards are far more effective at engaging us for longer periods of time; increasing amounts of dopamine are released into the brain as the anticipation of a potential win increases. It’s a feeling that can get people hooked  – hence people who compulsively game.

Work is full of expected, extrinsic rewards – the end of the day, the pay packet, the annual bonus. When they don’t turn out how we thought they would (for example, the annual bonus), we are particularly irritable. But the lasting effect of these types of reward is fleeting at best. Extrinsic rewards have been shown time and again to be ineffectual in engaging people intrinsically over the long term.

But games do this all the time. Not only do people volunteer to play them, they even choose to set games to “hard” to reach the top of the leaderboard. Perhaps this is an unfair comparison; after all, games are something we pursue in our leisure time. Some people prefer to swim, but does that mean we should all work from the pool? Perhaps not, but it doesn’t mean lessons cannot be learned.

Competence is that feeling of getting better at something that matters. Games are wonderful at encouraging this – they give instant feedback, prompt players when they fail and modify the task at hand in step with the player’s ability. Work is generally awful at this. Feedback comes sporadically, perhaps only annually. Where measured, competencies fail to align properly with job roles and any improvement can go unnoticed. And people are mismatched with roles all the time – some are never pushed and therefore chronically bored, others are overworked and constantly stressed.

Autonomy is the notion of being in control of your own environment and of expressing freewill. Games do this with bounded flexibility – not everything is possible, but you can choose from a wide range of actions. Again, work often falls short here. Overbearing management exerts excessive control and employees aren’t allowed to control the environment they work in or the tasks they perform. In fairness, we’re getting better. Flexible working practices and radically different organisational designs are starting to gain a foothold – for example, software company Valve’s organisational structure.

Finally, we come to relatedness. Games are increasingly social in nature. So-called massively multiplayer online games attract millions of players to their servers daily to hang out, play together, chat and complete group tasks. They allow people to relate to each other, to show off and to compare themselves against others.

Workplaces should be social; after all, we all cram on to trains and buses to get together every morning. So why is it that, having made the effort to get together, we then sit in silence for the next eight hours? Increasingly organisations are looking to reorganise around this idea. If you want to work quietly, that’s fine – do it from home. When you come to the office you are here to collaborate. Surely that can be the only purpose of gathering so many people together in one place?

These three levers of competence, autonomy and relatedness form the basis of the self-determination theory, the key framework behind intrinsic motivation. Games often fulfil all three needs and therefore it should be no surprise that people flock to them. In many ways, play is the opposite of work. But it’s not an inherent issue; the two are not polar opposites. Play has just come to stand for everything that work doesn’t. And that’s a problem entirely of our own devising.

Ben Betts is a gamer, entrepreneur and learning geek. He is chief executive of learning technology company HT2, and research engineer at Warwick University, where he researches the use of games for work and learning.