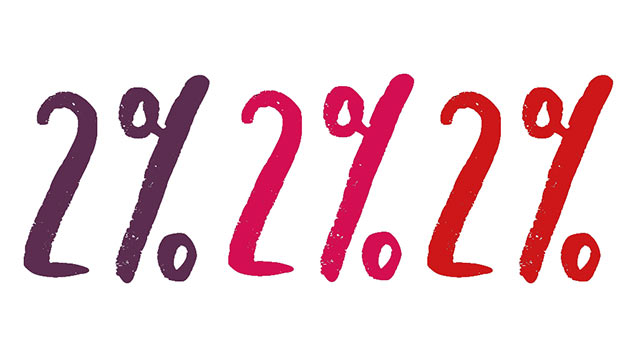 UK organisations are not offering any more in their annual pay awards than they were three years ago, according to the latest data on pay settlement trends.

The stability of the data suggests that 2% is the new benchmark for pay awards, and it shows no signs of shifting.

Based on a sample of almost 1,200 pay awards, XpertHR’s data does show that most employees are now receiving a real-terms increase in pay.

The 2% median pay award compares favourably with both inflation measures, with the retail price index at 1.1% in August 2015 and the consumer price index at nil. Yet few employees will forget that pay awards were worth less than inflation for five years between December 2009 and October 2014.

One piece of good news from the research is that the proportion of pay settlements resulting in a freeze has fallen, and now stands at 7.6% – not far off the long-run average of around 5% of pay deals in any one year.

Although the labour market has tightened, there is still a lack of wage pressure in the economy to push rises any higher” – Sheila Attwood, XpertHR

Data for the 12 months to the end of August 2015 shows that there are winners and losers among the sample. In the private sector, the figure recorded is also 2%, whereas in the public sector it falls to 1.6% – and this latter figure has been boosted by a number of pay awards where a higher amount was paid to the lowest earners. The most common pay award in the public sector was just 1%.

Commenting on the findings, Sheila Attwood, XpertHR’s pay and benefits editor, said: “While employees are now seeing real-terms growth in their pay, these figures are likely to be disappointing to many who were used to 3% to 3.5% pay rises prior to the recession.

“Although the labour market has tightened, there is still a lack of wage pressure in the economy to push rises any higher.”

Organisations are likely to feel additional pressure on their paybill budgets when the Government’s national living wage comes into effect in April 2016. For many, this is likely to result in additional pay increases required for employees aged 25 and over, and also further up the grading structure in order to maintain differentials.

XpertHR also found that organisations making pay awards based on performance are likely to have higher pay review budgets than those making across-the-board increases.

Based on an additional sample of 355 pay reviews where the outcome for each individual is dependent on a measure of their performance, the median paybill increase from which awards were made was 2.5%, half a percentage point above the basic increase figure.