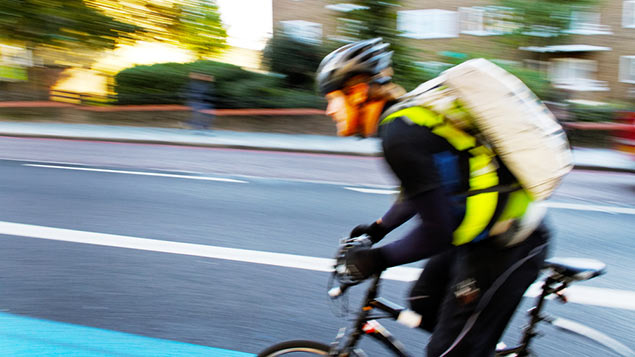 An employment tribunal has held that a cycle courier whose contracts with Excel labelled him as a contractor was in fact a “worker”, entitling him to holiday pay.

The judgment in Boxer v Excel Group Services Ltd (in liquidation) is the latest in a line of cases that has grown up around the “gig economy”.

In these cases, individuals taken on by gig economy companies purportedly on a self-employed basis argue that they are in fact workers.

The distinction is important because workers are entitled to some basic employment rights, including the right to holiday pay and statutory sick pay, and the right to the national minimum wage.

Mr Boxer provided his own bicycle, mobile phone and protective clothing when working as a courier for Excel. However, Excel provided him with a radio and palm computer.

While working for Excel, he generally worked nine hours a day. He was required to tell his controller in advance if he was planning to take time off.

Mr Boxer had to be available throughout the working day to pick up the next job allocated to him. He was expected to wait between jobs in a prescribed area.

He was paid at a fixed, non-negotiable rate, and received a document each month telling him what he was being paid.

When asked whether he queried any of the clauses, and if not why not, [Mr Boxer] said “I had no choice, it would not have made any difference, they would have laughed at me if I had challenged a particular clause!”

While his contract stated that both he and Excel should have insurance, the reality of the arrangement between Excel and its couriers was that only the company took out insurance.

Although Mr Boxer’s contract allowed him to send a substitute, in reality this was impractical because of the background checks needed and the urgency of the jobs.

If a particular courier could not do a job, his controller would choose another Excel courier.

Mr Boxer brought an employment tribunal claim that Excel had unlawfully failed to pay him holiday pay to which he was entitled. The key issue for the tribunal was whether or not he was a “worker”, which would entitle him to paid annual leave.

The employment tribunal had little difficulty in concluding that the contract signed by Mr Boxer did not reflect the reality of his relationship with Excel.

According to the tribunal, the claimant was not entering into an agreement to provide his business to Excel as a client.

In finding that Mr Boxer was a worker entitled to holiday pay, the tribunal was influenced by:

The tribunal also made clear that a theoretical right to send a suitably qualified substitute did not defeat Mr Boxer’s claim.

The reality of the arrangement was that sending a substitute was not a practical option.

The Central Arbitration Committee (CAC) will determine the employment status of Deliveroo riders in hearings taking place on 24 and 25 May.

“This judgement is yet further evidence of what we have known to be true all along: courier companies are unlawfully depriving their workers of rights.

As the tribunal dominoes continue to fall we would recommend that courier companies which are not yet subject to litigation by the IWGB urgently get their act together.”

Further analysis of the judgment in Boxer v Excel Group Services Ltd (in liquidation), with an explanation of its implications for employers, is available on XpertHR.