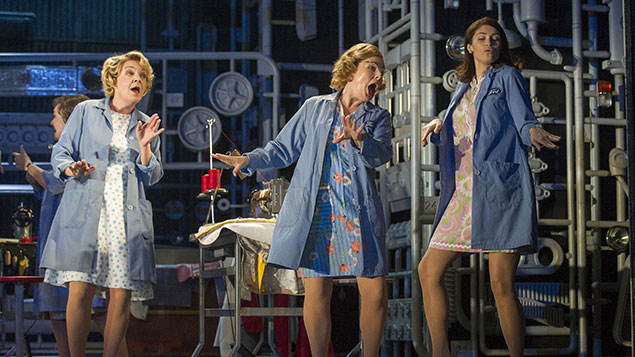 Made in Dagenham, featuring the Ford seamstresses' struggle for equality, was staged as a musical in 2014
Alastair Muir/REX/Shutterstock

As Tesco potentially faces a £4bn equal pay claim from its female employees, and claims are pursued against Asda and Sainsbury’s, are we moving into a new era of private sector equal pay claims? Paul Quain and Dónall Breen from GQ Employment Law look at recent developments.

In 1968, seamstresses at Ford’s Dagenham factory demanded equal wages for equal work, pointing out the male workers in the paint shop were being paid more for similar value work.

Their ensuing protests and national movement led to the Equal Pay Act 1970, but 48 years later equal pay claims continue to dominate the headlines.

In 2014, more than 10,000 shop workers at Asda began a claim against their employer that men in the distribution centres were being paid more for similar work.

More recently, it has been reported that Tesco could face up to £4bn in equal pay claims as a result of alleged underpayment of female workers. Although Tesco says it has not received any claims to date, the law firm Leigh Day claims over 1,000 current and former employees have already been in contact.

These recent retail cases have marked two significant variations in the type of claim being pursued.
First is the shift in focus from the public to the private sector. Traditionally it was the public sector that bore the brunt of equal pay claims.

At the turn of the millennium the Labour government marked 2004 as the deadline for local government to harmonise pay for employees and address historic inequalities. This led to several job evaluation studies which exposed unequal pay in several public employers.

The financial fallout was considerable. Last year, the Scottish Accounts Commission said that in Scotland alone councils had spent about £750m settling equal pay claims since 2004 and yet nearly 27,000 cases were still live. Birmingham has paid out over £1bn in equal pay related awards.

However, the cases against retailers such as Asda and Tesco have marked a new direction in claims towards private employers.

This pivot towards the private sector may be happening for a number of reasons. First, the big public cases taught unions and lawyers how to litigate mass equal pay claims.

Now that most public sector bodies are dealing with their equal pay responsibilities, it is lawyers in particular who are looking at the private sector for a continued stream of work. Further, retailers such as Asda and Tesco provide a familiar narrative. Like large public bodies, they too have considerable pay transparency (due to union bargaining) and employ large numbers of employees in the same or similar jobs.

Finally, gender pay gap reporting (although different from equal pay), is once again highlighting the disparity in remuneration. Women’s wages, and women’s rights more generally, are back in the zeitgeist and awareness of the right to equal pay has increased accordingly.

There has also been a shift from union-led cases towards law firms taking up the mantle. Although it is not new for law firms to bring mass equal pay claims (some lawyers made a small fortune suing councils in the noughties), the almost complete lack of union involvement in these recent cases is a new development.

There may be several reasons for this. First, unions may no longer be best placed to take these claims. Union membership has collapsed since its height in the 1970s, with currently only about 2.6 million employees in the private sector being union members.

Further, in 2005 a tribunal held that the GMB union itself had indirectly discriminated against female members by focusing on pay protection for men over back-pay for women, undermining confidence in their motivations.

In this context, law firms have also become savvy about how to organise mass equal pay claims.

Cases are pitched as no-win no-fee, meaning workers have little to lose by signing up. They are making use of technology such as Facebook advertising to reach out and connect with large numbers of workers.

This technology is then being used to organise and communicate with large groups of claimants, negating the need for a union to act as a broker.

Finally, the success of the claims against public sector organisations has proved that taking these cases can make financial sense.

Even a small percentage success fee of a multi-million pay-out is a considerable reward for the risk of brining a claim. Unions are no longer the only entities capable of bankrolling these cases.

Nonetheless, this shouldn’t mask the risk law firms are taking. Leigh Day is currently in its fourth year of the Asda litigation without any fees being paid to them. Meanwhile, Asda is a subsidiary of the deep-pocketed retail giant Walmart.


Although it is not new for law firms to bring mass equal pay claims, the almost complete lack of union involvement in these recent cases is a new development.

We cannot say for sure how these equal pay claims will turn out. The reality is that the Asda case has not yet been decided and the Tesco case hasn’t even started.

Although these will undoubtedly be critical test cases, should they fail to deliver a satisfactory financial outcome for those bringing them it is possible that law firms and future claimants may be wary.

Equal pay claims are legally complex, can be difficult to settle early and can drag on for years as people jump on the bandwagon long after the initial launch.

Further, the 2015 Farmah v Birmingham case clarified that claimants performing different jobs could not be included on the same claim form.

This has serious implications for the number of private sector industries the mass claim model may be suitable for.

Although retail is a good example of such an industry, the pool of potential respondents may not be sufficiently deep for considerable investment in the private sector.

However, there is a clear direction of travel and we would predict that this is going to be a growth area for employment lawyers and something should companies should watch very carefully.

Perhaps gender pay gap reporting and other similar measures will force private employers to take action before it reaches that point.

It is certainly something private companies should consider. A stitch in time saves nine, as the seamstresses at Ford could have told us.