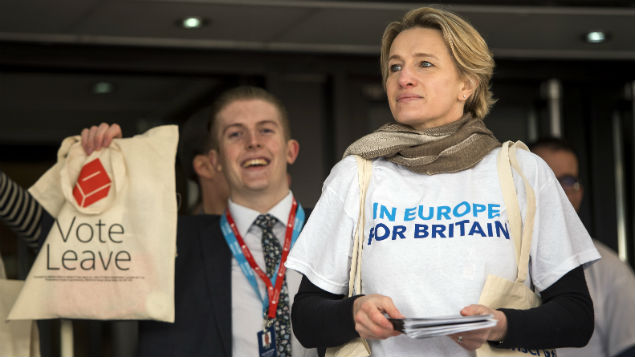 Delegates at a Conservative Party forum this month are split on the EU referendum. PHOTO: Ben Cawthra/REX/Shutterstock

As the debate hots up over the UK referendum on leaving or staying in the EU, what steps should UK employers be taking to prepare for a potential “Brexit”? Jo Faragher looks at what employment law experts are advising.

It can be hard to make sense of the noise around the UK’s potential exit from Europe. Market research companies have gone into overdrive as they poll the nation on everything from a “leave” vote’s impact on the jobs market, to how it could affect the price of milk. For HR, the key concerns, should we decide to vote in favour of a “Brexit”, are likely to be the impact on employment law, whether it will reduce access to key skills that employers need, and the movement of labour between the UK and EU countries.

More on the EU Referendum

As we approach the referendum on 23 June there are few certainties, other than that if the UK does break away from Europe, the process will not happen overnight. Upon making a decision, the UK must first notify the European Council of its intention to leave, and there is a two-year period after that in which the mechanics of the withdrawal are negotiated. Once that has been decided, the exit itself is likely to take even longer.

“The UK won’t suddenly redraft all legislation from Europe,” says Sarah Henchoz, employment partner at Allen & Overy. “Contracts are drafted based not just on the case law but also on legislation flowing from Europe. If we ripped it up and started again we’d have to get new terms and conditions for everyone.”

The CIPD’s advice to employers on Brexit echoes this, saying “there are simply too many uncertainties that will not be clear until after the result of the referendum, and potentially some time after then”.

There are also a number of potential avenues that the UK could follow in terms of its ongoing dealings with the EU. We could become a “nearly-but-not-quite” member (the model adopted by Norway), where we are still a member of the European Economic Area, but have no vote over EU rules. We could have a negotiated free trade deal (like Switzerland) or a clean break where we would need to establish trade deals with other countries through the World Trade Organisation.

For employers with a presence in EU countries, it is worth developing strategies to reassure current or prospective employees on what might happen if there is a positive vote to exit. One of the basic principles of the EU is freedom of movement, and while this is unlikely to be removed immediately in the event of a vote to leave, arrangements for visas or amendments to contracts may need to be considered.

“If you work in a company that operates in other EU states then it’s worth at least doing a sense check on your employees and where they are. At the moment there are no real restrictions, but one of the side-effects [of a Brexit] could be on the flexibility of labour,” suggests Paula Rome, a partner at law firm Shoosmiths.

One other side-effect could be that turmoil in financial markets and uncertainty about employees’ rights makes organisations nervous about hiring from Europe, or hampers their access to talent in other countries. Oliver Shaw, CEO of payroll software company Cascade, says: “If you’re a Spanish person considering coming to work in the UK, would you still come after a vote to leave?”

Other regulations influenced by the EU include the Working Time Regulations, which restrict the number of hours someone can work per week (unless they opt out) and the Agency Workers Regulations 2010, which stipulate that agency staff must enjoy the same working conditions as their permanent colleagues after a period of 12 weeks.

Both have had their detractors, and it is possible that a British government working outside of the confines of EU legislation could tinker with these rules to cut red tape. “I think the UK Government could use Brexit as an opportunity to create a more business-friendly legislative environment,” says Marie Walsh of Consilia Legal. “So we may see amendments to the likes of agency workers’ rights and collective consultation, or a relaxation on the rules around harmonisation of terms post-transfer.”

One of the thorny legal issues surrounding Brexit is what might happen to any judgments that might be handed down via European courts during the transition period between a vote to leave and the exit itself. “If the EU courts develop a piece of law, are we bound by it and do we implement it, or because we’re in transition do we ignore?” asks Henchoz from Allen & Overy. “I don’t think we’ll be able to pick and choose the legislation we like.”

One such piece of legislation is the long-running case on holiday pay, British Gas v Lock, where it has most recently been confirmed that employers must pay commission as part of holiday pay, although not yet established how this calculation should be made.

“It’s likely what we have in the way of judgments from the European Court of Justice will stay as is, but there could be flexibility to step outside of those judgments going forward,” adds Rome. She makes the point that many decisions that go to the European Court of Justice are ultimately sent back to their host country to be decided by local courts, so legislation that we think of as European may actually have been ratified here in the UK through our own tribunal system.

Indeed, much of the UK’s primary employment legislation goes beyond EU recommendations. The UK offers more paid holiday days than any other country and family-friendly legislation such as shared parental leave is progressive by comparison. It would be an unpopular government that revised any of these  provisions, and the European Convention on Human Rights is separate from the European Union, so should not be affected by exit. On the flipside, however, we have tighter regulations on unfair dismissal and the Government has increasingly clawed back trade unions’ rights, and this trend could continue.

Practical steps to prepare for Brexit

Should there be a vote in favour of the UK leaving the EU, it is crucial not to make any knee-jerk amendments to employee contracts that might be difficult to amend, as these will be binding. Donald MacKinnon, director of legal services at Law at Work, warns: “The danger is in trying to anticipate what might happen and writing it into contracts, giving people contractual rights that need to be exercised.”

But Caroline Acton of Consilia Legal advises employers to look at terms and conditions sooner rather than later. She says: “It’s good advice to look at contracts now, especially for new starters, but be careful about changing things such as holiday allowance or the right to carry over sick pay.”

Other practical considerations for employers that operate in multiple countries could be further changes to trade union legislation or the rules on consultation. “What happens if 99% of your workforce are in works councils but UK members no longer get a say? What impact might this have on wider employee relations?” points out Henchoz from Allen & Overy.

Of all the potential legislative changes a “standalone” UK might push through, lawyers believe further clampdowns on trade union activity to be among the most likely. “We may also see the Government introduce a cap on discrimination payouts or guidelines similar to those we have for injury to feelings,” adds Acton.

If we make the break away from Europe, this would also mean that where once the EU courts provided a safety net for employees or unions to challenge UK decisions (for example Unison’s fight against the tribunal fees regime), this would be removed. “The moment we formally exit the EU, our own Supreme Court becomes the final arbiter on all of these issues,” says Dan Peyton, a partner at McGuire Woods.

With so much uncertainty, the best policy for now is to be aware of the make-up and location of your workforce, and reassure those who either work for you in other EU states or come from those countries that you will keep them informed of their rights.

Finally, take comfort that a radical overhaul of our legislative system is unlikely to happen any time soon. “If we need to retain a commercial relationship with European countries it is unlikely we will implement a system of employment law that’s starkly different from what we have already,” Peyton concludes.